Grigory Sokolov has been treated as the insider’s pianist for far longer than he’s only been known to insiders. But the label sticks even if he is now among the most famous pianists on the circuit. What is true about that classification (or at least its origin) is that the fame came relatively late (he is now 61), that even then fame was long limited to Europe, and that he is a great favorite among musicians—especially pianists (“’pianist’s pianist” for once not just being a terrible cliché). And that, as far as recordings are concerned, he is rather under-represented compared to many colleagues: No exclusive contract, no advertising blitzes, only a select amount of live recordings on the naïve label.

Sitting at the piano like the lovechild between the Hunchback of Notre-Dame and the (Danny DeVito’s) Penguin from Batman, he plays without attitude, without public emoting, but instead looking rather uncomfortable with the fact that so many people—nearly twenty-two hundred in the Grosses Festspielhaus in Salzburg—are looking on. The recital with which Sokolov currently travels consists of Bach’s Clavierübung Part II (Italian Concerto BWV 971 and French Overture BWV 831) in the first half and Robert Schumann in the second (Humoreske op.20, Four Piano Pieces op.32). The Italian Concerto’s first movement was played unsentimentally, pianistic-but-dry, not at all what was once known as “Russian Bach.” The slow second movement had its notes carefully separated, all individual pebbles to form a whole – given sufficient distance… but with a decided romantic stance. The third movement finally was explosive blistering fast, as if to make up for lost time from the slow Andante. Percussive, yes, but as if played with felt-mallets… like the relentless bubble of a hasty brook and technically flawless to boot.

Almost annoyed at the applause, he immediately went on to perform the eight-movement French Overture, which was considerably different: The dominating opening movement was milked, not for effect, presumably, but meaning – at a very careful pace. Eventually a steady rhythm took the reins and that necessary unfussiness returned to Bach which is at the core of his music and, especially as it becomes more rigorous, gives his music that impossibly compelling aspect, and so much life. Sokolov’s reoccurring, dampened, subtly soft-yet-percussive piano (not quite a pianissimo nor just a mezzo piano) delighted several times, even as tempo extremes baffled me more than they clarified either the music or the interpreter’s intent. The Sarabande veered between earthly-slow and heavenly ethereal while the concluding Echo had all the gravity of a well-settled, perfectly content ox cart.

Schumann’s Humoreske opened with the “Simple” first movement where Sokolov only tapped the notes of the left hand, while his right hand slowly enunciated the melody, somehow keeping the line and greatly emphasizing the fragility in the process. Much of Sokolov’s Schumann, here and in the Four Pieces op.32 (Scherzo, Gigue, Romance and Fughette), was so pleasing precisely because it felt like one was eavesdropping on the introverted composer himself, trying out different extremes in dynamics and tempo; Eusebius and Florestan sparring with each other. 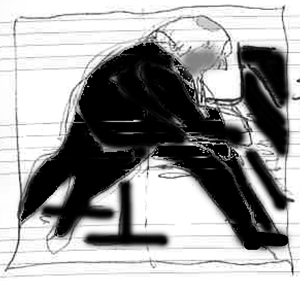 It created an improvisatory intimacy, even in that rather ungainly, too-large, hall. Occasionally his playing was so fast that it obscured the phrasing, but usually these were just little spurts followed by soft touches that developed incredible volume for all their softness. If there was a modicum of soberness in the Italian Overture, it was all gone in Schumann. And why should there be, in this music? Sokolov delved into every nook and cranny of the composer’s creations, seeking out its extremes, though without indulging in them… out of necessity it seemed, not exuberance.

Sokolov followed the perfectly melancholic and rather unfunny “Humoreske” with a gruff Scherzo, a Gigue that galloped like a confused horse on illegal substances, calming down only at intermittent phases, like the following Romance. The Fughette struck as more incidental, quasi spiccato, and an afterthought either of the composer or pianist… difficult to tell whom, because they had become one. Having a particularly social day, Sokolov actually took the flowers that an avid fan offered him, and proceeded with encores: One by Bach, so fast as to be nearly disfigured, and one by Rameau, so rustic it brought a roving band of dancing peasants to mind.