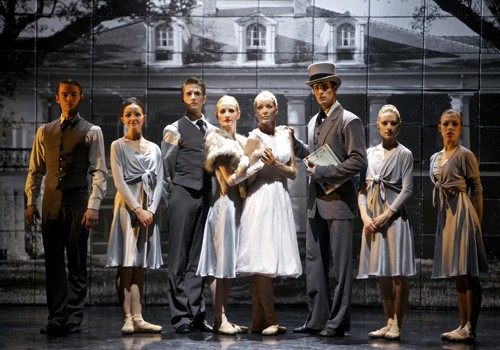 – Eve Mutso as Blanche and artists of Scottish Ballet in Act I of A Streetcar Named Desire. Photo Credit – Andrew Ross.

A number of things have passed me by in my life so far and I can add the work of Tennessee Williams in its various incarnations to never having read The Lord of the Rings or sat through The Sound of Music, 2001: A Space Odyssey or Titanic … to many other things that people tell me I have missed out on.   ‘A Streetcar Named Desire’ is such an important part of popular culture, I was aware of its story by default of course, particularly through familiarity with the life histories of Vivian Leigh and Marlon Brando who both had close associations with the 1951 film version. I am very grateful therefore, to the well-presented Scottish Ballet souvenir programme and the reminiscences of a colleague who studied the play for an A Level exam, for providing me with the background to this compelling dance-drama version.

Williams’ great play is tailored made for reinvention though the medium of dance, which for various reasons seems at the height of its popularity at the moment. Indeed I believe there have already been two other dance versions of the story before Scottish Ballet’s significant new production. The original play has the destitute southern belle Blanche DuBois living with her sister, the much abused Stella, and testosterone-fuelled brother-in-law Stanley Kowalski, in a small New Orleans apartment. It is a mix of passion, cruelty and tragedy inspired by macho-male pride and sisterly-solidarity.

The plot of ballet is more linear than the play and the first image takes inspiration from Tennessee Williams’s original title for A Streetcar – The Moth. We see a young Blanche DuBois dancing under a bare light bulb; the light representing desire that attracts but can also burn. Unlike the play which only alludes to the back story, we follow Blanche’s life while growing up in the Deep South with her life ahead of her. This device allows her at pivotal moments to be haunted by the ghost of Alan her husband, who commits suicide after she discovers him with another man.

Outgoing Scottish Ballet artistic director Ashley Page could not be leaving the company on a greater high. He is to be applauded for inviting Shared Experience Theatre’sNancy Meckler to direct her first ballet, in collaboration with Colombian-Belgian Annabelle Lopez Ochoa who choreographs narrative dance for the first time. Her steps are not always very innovative with rather too much pirouetting and nods to Broadway but it is always extremely effective and becomes more compelling as the ensuing drama unravels. Peter Salem’s understated score – which is only occasionally dissonant – is inspired by jazz and dance rhythms. It was spiritedly played by Scottish Ballet’s small ‘band’ under the vastly experienced Martin Yates. Performed together with the inclusion of everyday noises, including sounds of cicadas and ceiling fans – (there was also – to my ears – some film soundtrack) – the music was hauntingly atmospheric at times. There was also a recurring motif of Ella Fitzgerald’s lilting ‘It’s only Paper Moon’ which seemed a metaphor for Blanche’s fragile reality.

Knowing the play or reading the synopsis does help because some of the events rush by a little undeveloped – but there are some wonderful set pieces that I will not spoil by elaborating. Among such moments we see Alan’s attraction to a young man and his subsequent suicide, Blanche’s loss of her friends, the male tribalism at the bowling alley, Stella and Blanche’s trip to a show, Blanche and the innocent Mitch ‘courting’, and Blanche’s descent into madness surrounded by ‘flores para los muertos’ (flowers for the dead). Niki Turner provides some appropriate period costumes and the basic set is just some scaffolding – but what the company can do with a bathtub, a small platform and some crates needs to be seen to be believed.

There is dancing of real power throughout the performance by a company on top form, only let down a little – and maybe this is just me – by Eve Mutso as Blanche whose decline in Act II was very affectingly portrayed even though I never once believed in her as a promiscuous drunk. She is a lithe, supple mover with long limbs, whose pointe shoes made her often tower incongruously over most of her partners – more Praying Mantis than Blanche DuBois. Strangely, I thought Kara McLaughlin reappearing in hallucinatory flashback as the Young Blanche was more charismatic. Sophie Martin’s Stella was an even more sensual dancer who suffered her character’s victimisation with a chilling lack of protest, whether it was during rampant making – up sex (actually an energetic pas de deux) with Stanley or his physical mistreatment of her even when heavily pregnant. Before Alan’s suicide Victor Zarallo brought the character to life in the sexually charged pas de trois with Blanche and his young lover; Luke Ahmet dancing like a young Wayne Sleep.

I suspect there is more than just a hint of Marlon Brando to Tama Barry’s brawny Stanley. He is a very macho, somewhat misogynistic guy and very much of his time and place in the American South. Self-absorbed, dumb and cruel, his glorying in his rape of Blanche is particularly unedifying but he is also someone to be pitied when, at one point, he cries out for his Stella. It is easy to see then something of what she sees in him, since Stella feels the need to be possessed and he is all she has really got.

This is very much a second review because Seen and Heard’s Simon Thompson has already reported on this ballet from Edinburgh. In spite of my few reservations, with this success the excellent Scottish Ballet shows the way for the art form’s survival in the coming decades. I was excited to see such a mixed audience at Sadler’s Wells, young, old, men and women – an unusually wide demographic for a performance by one of our national ballet companies. Perhaps trying to attract such a wide audience explains my one major gripe about Scottish Ballet’s presentation of the story. I thought we were given the PG (parental guidance) version of the story when what I wanted was some a little more of the R-rated (restricted). (Tama Barry’s Stanley kept taking his iconic vest off at every opportunity while all the women remained primly covered up.) As good as it was, I thought it must have been a rather sanitised version of the original play. Also in my ‘innocence’ I wondered where the ‘streetcar’ came into it all until reminded that Blanche just uses the New Orleans streetcar route named ‘Desire’ to reach Stella’s home on ‘Elysian Fields’. Although, in fact, her own desires act as her motivation throughout the play and with them she ‘hangs on’ to her life and ultimately they overwhelm her.