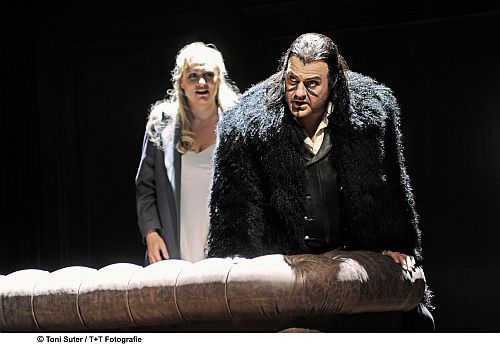 Homoki chose to set the opera not on a ship, nor on a quayside, but in the offices of a turn-of-the-century shipping office, perhaps the Hamburg equivalent of the East India Company. The sailors were clerks (though some wore Hamburg-style sailor’s caps); the spinning ladies in Act II were secretaries, the spinning wheels having turned into early typewriters. Centre stage a revolving tower used to change the scene and for other magic tricks: the Dutchman appearing and disappearing through one of its many (sometimes clunky) trap doors. Desks and furniture appeared as though from nowhere. On the wall a clock which either stood still or moved round dramatically and a large map of the lower half of Africa showing some of its ports. In the text there is a reference to the shores of Africa (or it might be South-East Asia) indicating Daland and his team were continuing the maritime exploits of the Dutchman some centuries before. In Act II Daland’s house has a painting of the sea on the wall which cleverly comes to life bearing the Dutchman’s ship.

The production was full of theatrical bustle; the “sailors” lurched from side to side in the stormy “sea” until Terfel appears, almost magically, as the Dutchman and the mood changes. Terfel commands the stage, physically and vocally, always a towering and brooding presence. He is dressed at first in a shaggy coat, perhaps a reference to his family’s Welsh farming background, as I cannot imagine the coat would be very practical in the gales of the German Bight. On his head he sports a top hat with a red feather in it, almost the only colour on stage, everything else is in monochrome as in a dream.

The production doesn’t quite work when the townsfolk invite the crew of the Dutchman’s ship to the homecoming party. This is done by telephone and when the Dutchman’s crew do come on shore, we simply see Daland’s servant change into a Zulu warrior and Daland’s men killed by flying arrows coming, not from ghostly spectres, but from invisible other Zulu warriors. The map of Africa burns to depict the end of colonialism.

Vocally Terfel was in top form throughout and his diction – as usual – crystal-clear, the role of the Dutchman (short by Wotan standards) suits him perfectly. The opera house in Zurich is small compared with many and his voice filled every crevice.

Anja Kampe, also in Zurich for the first time, sang Senta, as at Covent Garden some years ago. It was a fine all-round performance, and whilst not all the top notes were pleasing they were there and with force. Kampe matched Terfel for dramatic and vocal intensity; at the end, instead of throwing herself into the sea, she shoots herself with Erik’s hunting rifle. The Dutchman’s salvation has come at last.

Matti Salminen, a Wagner natural and Zurich opera stalwart (part of the ensemble since a remarkable 1984) looked and sounded a very comfortable and sonorous Daland and looked suitably avuncular. Marko Jentzsch as Erik was announced as having a cold but sang nevertheless; it did affect his voice from time to time but he put on a very brave show. I very much liked the sweet voice of the Steuermann, Fabio Trümpy, a new and very promising addition to the Zurich ensemble this year.

Alain Altinoglu, a young Frenchman who even at 35 has conducted at many of the world’s major opera houses, is clearly a man to watch. His overture was vigorous and he kept up a slick pace throughout the opera. There were timing difficulties at some of the passages for the chorus where the tempi suddenly changes, principally because the cast was too busy running about the stage than watching the conductor.

But the night belonged to Terfel and the cheers rang out into the snowy night.