Most music lovers would know the answer to “Where were you when you heard Beethoven’s Ninth for the first time?” If they don’t remember specifically where, I’m sure they would know when, and they would probably also know whose performance it was. It would not be uncommon for my generation to have first heard the symphony as performed by Toscanini and the NBC Symphony Orchestra on the RCA Victor label (1952); for those with access to a television set, it might have been its broadcast in 1948. For us there will always be a vinyl LP, scratches and all, playing somewhere  in our minds. 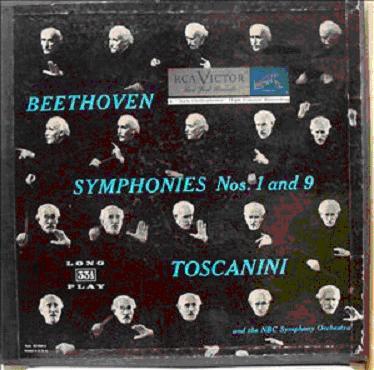 Every performance of the Ninth is a gala event in and of itself, and the New York Philharmonic Orchestra’s performance was no exception. For me it was the appropriate finish to a day devoted to this monumental work.

I began with Touch Press’s Beethoven’s 9th Symphony, an application software product designed for the iPad. It’s the latest attempt to integrate music, text and visuals and grew out of the Microsoft Home series of multimedia CDs from the mid-1990s. Earlier products like Microsoft Home’s Multimedia Strauss: Three Tone Poems tried to merge different media but lacked the availability of computer power and storage capacity to accomplish what their designers could only imagine.

This new application allows the user to listen to the Ninth while any number of choices are available for viewing concurrently. There are four full recordings to select from and a choice of two scores that scroll across the screen in synch with the music. At any time during the playback, these variables can be changed. Karajan’s performance can be switched immediately to Bernstein’s, Fricsay’s or Gardiner’s; the score can be changed at any point from the copyist’s manuscript to the most recently edited, near-urtext edition. The sometimes difficult notion of tuning becomes crystal clear when any of the other three performances are switched to Gardiner’s. His tuning of A=430 sounds discordant and substantially lower in its register when compared to the higher-pitched traditional performances. A visual map of the orchestra viewed during the playback highlights the soloists or sections of the orchestra as they join in or drop out of the score, while a colored “BeatMap” sends vectors up and down the screen. Excellent commentary by   Beethoven aficionados and by orchestra members and conductors while they listen to their own performances with headphones add to the cornucopia of material. If this isn’t enough, a video of  Bernstein’s 1979 Ninth with the Vienna State Opera Orchestra is available: all this and more for the price of one of the four orchestral recordings. 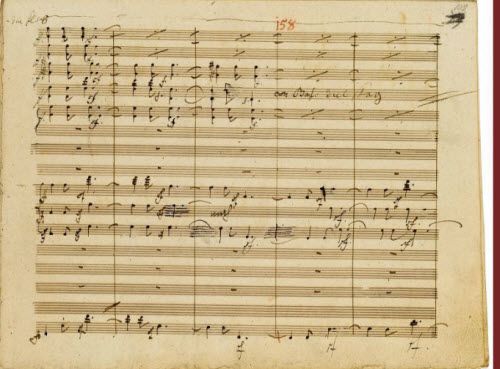 In the afternoon I joined my colleagues to view two copyists’ manuscripts of the Ninth, together for the first time at the Juilliard School’s Manuscript Collection. Curator Jane Gottlieb, explained that the Royal Philharmonic Society as a goodwill gesture for their 200th anniversary had funded and had made available to Juilliard and the Morgan Library the original commissioned copy of the score that Beethoven had prepared for the Society in 1825. It’s the conductor’s copy used by George Smart in the UK’s first performance of the Ninth. It is also the edition used in the iPad application discussed above. The Juilliard copy was the score used to prepare the first printed edition. Viewing these scores reinforces the hackneyed but seemingly true image of Beethoven as mad genius. One can only stand in awe before these stained, yellowing pages and their scribbles: documentation of perhaps the greatest musical work ever.

Filled with the sensation of being as close to the great man as one can ever expect to be, I had the coincidental good luck to attend that evening’s performance  of the Ninth by the NYPO under the direction of Alan Gilbert.

The concert opened with a work commissioned to celebrate the 200th anniversary of the Royal Philharmonic Orchestra, Mark-Anthony Turnage’s Frieze. Hopefully we’ve learned to be more accepting of new music so as not to be the target of future disdain for making the sort of derisive remarks about Frieze that Beethoven’s early critics made upon hearing the Ninth: “a concert made up of Indian War whoops and angry wildcats,” “the unspeakable cheapness of the chief tune, ‘Freude, Freude!'”, or “a morbid desire for novelty; by extravagance and by a disdain of rule.”

Frieze was pleasant enough but, as often happens with commissioned scores, hardly identifiable as a commemorative to either Beethoven or the Royal Philharmonic Society. The first movement’s opening notes and tempo and the second’s long fermatas, albeit without drums, could superficially be inspired by Beethoven’s first two movements. The third movement’s opening with just strings could vaguely be compared to Beethoven’s. As for the Ninth’s massive finale, Turnage honestly and admiringly admits that he “didn’t attempt to  be in the shadow of the epic last movement.” My real complaint would be that the work is not modern enough: with only a few degrees of separation, it might be considered a commemorative to the music of Leonard Bernstein.

The performance that evening of the Ninth was a not-wholly-successful synthesis of Gilbert and his orchestra. Here is a conductor sharp enough to realize that the Ninth is not a piece of music to be approached lightly: he waited four years into his tenure to add it to his repertory. The NYPO has played it almost 200 times over the years. Not that any one on stage has been there since its first performance in 1846, but if we are to believe that orchestras like the Berlin Philharmonic and the Philadelphia have a particular “sound” carried down from retiring musicians to newcomers, the same can be said of the NYPO. Like the Philadelphia Orchestra, the NYPO seems over the years to have developed suavity in sound from the string section, a less distinctive wind section and a brass section that at times reaches the outer circle of the Berlin Philharmonic’s brass.

The first movement was workmanlike, not particularly bright or as dramatic as it should be. The second movement could have had more angularity, and more attention and discrimination should have been given to the rapid, almost disrthymic, use of marcatos, fortes and sforzandos. The third movement was less problematic, helped by the lush sounds of the strings, but it did not quite achieve the potency needed when the trumpet and horn calls break in toward the movement’s end.

What can be said about the final movement, an all-out display of energy, some of which could have been used to fuel the previous movements. The four soloists and chorus, having waited 40 or so minutes to do their thing, did it with alacrity, vigor and dispatch. Was it moving? It can’t help but be. Was it a great performance? Not really. Will Gilbert’s next performance improve? You bet.