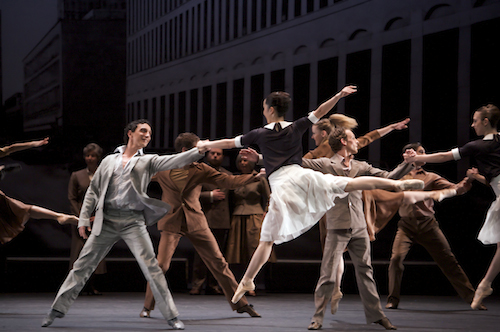 There were times during the recently premiered ‘The Winter’s Tale’ at the Royal Opera House, and during the ‘Tempest Replica’ at Sadler’s Wells, when I found myself wishing that someone would say even one (whole) line from the Shakespeare plays on which these choreographed works were based. I did not think this during Scottish Ballet’s Romeo and Juliet. Listening to Prokofiev’s music (as it was played live by the Scottish Ballet Orchestra), you do not feel the want of Shakespeare’s words. The story moves inexorably to its tragic conclusion. Choreographer Krzysztof Pastor and the dancers of Scottish Ballet develop chosen aspects of it through a mixture of classical and contemporary movement, and with mounting dramatic force. (Though the film of corpses in scenes of modern day war and terrorism, used during the ballet’s third act, is, I think, out of place.)

Created on the company in 2008, and now presented in London for the first time, Pastor’s version updates the action of the play to three different periods of the twentieth-century Italy (one for each of the ballet’s three acts). The first people to move, at the start, are those in the images of film from the 1920s or 1930s that are projected on to a backdrop. Also on the backdrop, where it remains throughout the ballet, is a large, monochrome painting from a photograph of a street lined with the blank façades of ‘fascist’ architecture. One of these, in the distance, forms an oppressive and ever present dead end.

If the stage is almost too crowded during the initial scene-setting of rivalry between the Montague and Capulet families, Pastor himself seems to acknowledge and effectively correct the fault. When Juliet (Claire Robertson) first appears everyone around her falls to the ground before slowly rolling to the semi-darkness at back of the stage, where they stand up and walk into the wings. Robertson’s Juliet is, from the start, intelligent and self-aware. Dancing for her black-suited, black-shirted father at the Capulet ball (where she will later meet Romeo), the angular poses she adopts seem consciously to parody the repressed Capulet woman he wants her to be (and for which her mother, movingly portrayed by Kara McLaughlin, is the blueprint). When she dances with Romeo (Christopher Harrison) her lines become increasingly fluid and soft.

Although rather difficult to make out in the crowd of the opening scene, Christopher Harrison emerges in the duets as a dancer whose upper body is attractively pliant and expressive, and who gives his attention to his partner. There are no great, Bolshoi-inspired lifts (the closest the ballet comes to one of those is when Juliet’s Capulet suitor raises her in the air like a trophy). For the most part, Romeo and Juliet dance side by side. There is also a moment in which Juliet herself finds pleasure in watching Romeo dance (his classical leaps and tours), from the bed in which they have just spent their one night together.

Pastor also focuses on the relationship between Romeo’s friend, Mercutio, and Juliet’s cousin, Tybalt. As in the play, this is given a homoerotic charge. Like a fly buzzing around him, the camp, sprightly Mercutio (Daniel Davidson) seems to taunt the stiff, jackbooted Tybalt (Owen Thorne) as much for being repressed as for being a Capulet. After one of their bristling duets, these dancers received the first spontaneous applause of the evening. The corpses of Mercutio and Tybalt are the first to appear on the stage. They are followed, not long afterwards, by those of Romeo and Juliet. Claire Robertson and Christopher Robertson make it look as if you are seeing for the first time the often represented false death of Juliet, then the real deaths of both she and Romeo. Robertson disbelievingly drags Juliet’s corpse about as Romeo does in Kenneth MacMillan’s 1965 version for The Royal Ballet, but in a kinder, more tender way. As he thrusts a dagger into his own stomach someone in the audience gave a loud hiss of surprise, or pain. The crowd from the opening scene returns (in modern-day dress), with Juliet’s family, to look on the bodies of the two lovers. From the expressions on their faces it is as if they knew, all along, that something like this would happen.