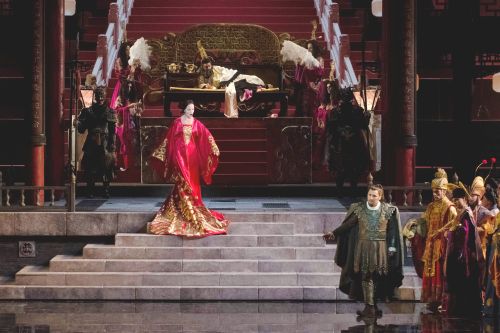 As I mentioned in my review of La Forza del Destino, it’s an emotional time at the  Festival del Mediterraneo. In particular, I referred to the reactions of the audience  whenever Zubin Mehta appeared in the pit. The emotions at Turandot seemed even stronger, but let me say first of all that the performance was a resounding success: a brilliant staging, great musical direction and a fine cast.

Let’s come back to those emotions. The atmosphere is very tense in Valencia, and there’s a good reason for this. Everyone realizes that an artistic project that has given us so much joy over the years is at serious risk of going broke. The first outbreak of emotion came at the announcement over the loudspeaker that the performance would be devoted to the memory of Rafael Frübeck de Burgos who had died a few hours earlier. The applause in memory of maestro Frübeck gave way to a very loud boo dedicated to Valencia’s Minister of Culture. The boos and cries of “Minister! Resignation!” were all over the house. The excitement continued to grow and, at the beginning of third act, somebody from the top tier shouted loudly: “Zubin, don’t leave!” The ovation was enormous, the audience stood up and Mr. Mehta had to turn around and acknowledge the cheers. At the final bows, he was greeted with a standing ovation, accompanied by a shower of papers, some of them with his picture and a text of gratitude, and others with texts saying “Maestro Mehta, don’t leave!” on one side and “Ignorant Politicians!” on the other. Zubin Meha took one of the papers and placed it over his heart.

In the midst of this charged atmosphere, we experienced a magnificent Turandot.  Palau de Les Arts had offered the opera twice before, the first time under Zubin Mehta and then with Lorin Maazel. That first time Mehta’s conducting was most brilliant, while Maazel shaped a true musical monument. Now, on his return to Turandot in Valencia, Mr. Mehta’s reading has again been outstanding. There is a special relationship between the conductor and Turandot. It was he who took the opera to the Forbidden City of Beijing; and then there is the superb version he gave us in that unforgettable 1972 studio recording. On this occasion, Mr. Mehta’s conducting was particularly vibrant and the orchestra was at their best under his baton. The same can be said of the excellent choir.

Leading the cast was soprano Lise Lindstrom as Turandot, and she was very convincing. She is just the opposite of those powerful Ice Princesses that we have seen so many times on stage. Her voice is not particularly strong or particularly beautiful, but it is well-suited to the role and projected very well: she has no problem in reaching every corner of the theater. Besides that, she sings with good expression, and the high notes are no problem for her.

Jorge de León was Calaf and he was also impressive. His singing seemed more nuanced than at other times. I thought in the first act that his middle range had lost some squillo, but things improved in the following acts. His interpretation of Nessun dorma was received with a thunderous ovation. He escaped from the high C in the second act.

Jessica Nuccio was somewhat weak as Liú. Following her success in this theater as Violeta, nothing seems more reasonable than having her sing Liú. However, I found her lighter than what the character requires. She is a good singer with nice piani, but Liu needs a lyric soprano which Ms. Nuccio is not.

Alexander Tsymbalyuk was a good complement as Timur. The three masks also did well as an ensemble, although the individual voices were not particularly attractive.

The stage production was premiered in this house six years ago. It is by Chen Kaige, who was then making his debut in opera, and the work continues to be as spectacular as the opera requires: beautiful sets with a giant pagoda as palace and an enormous staircase at the back of the stage. It is noteworthy that the scene of the masks is offered in a rich set and not at the front of the stage, as is usually done. The costumes are very attractive, particularly for Turandot, and the lighting is good. The stage direction has some debatable points (such as the fact that Emperor Altoum is presented as a kind of Herod in Salome), but the entrance of Turandot in the first act crossing the stage and climbing the huge staircase is glorious. All in all it is an outstanding stage production.

The Palau de Les Arts was fully sold out. There were no less than 13 minutes of ovations and cheers at the end.