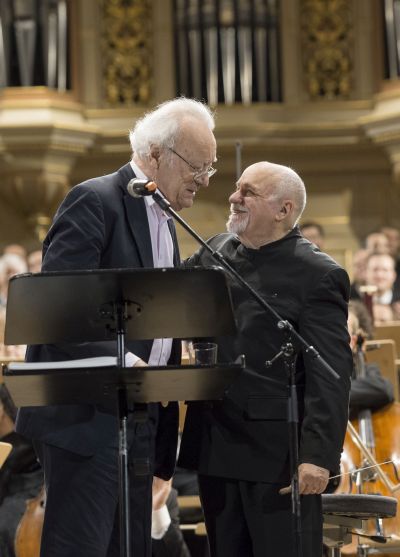 There was a palpable sense of occasion to this final Tonhalle concert of the season, the last with their Chief Conductor David Zinman at its helm. Swiss TV and Radio were present to capture the occasion. It was the end of a 19-year-long era which saw the orchestra start somewhat as a central European “also ran” to become a polished and respected orchestra within the higher echelons of orchestral rankings (though the critic of the Neue Zürcher Zeitung admits there is still a way to go). This can only be put down to Zinman’s work, dedication and affection for the orchestra. It was his friend Isaac Stern who had mentioned to him that the Tonhalle were, after a number of fairly short-term Chief Conductors, looking for someone who would stay longer: Zinman came, saw, heard and – thankfully -stayed.

Not every Chief Conductor is fortunate enough nowadays to be in a position to organise his final concert in such auspicious circumstances; sometimes the best-made plans are foiled by illness or financial adversity. Zinman chose to go out with a bang, with Mahler’s might “Resurrection Symphony”. The stage was jam-packed, with chorus members filling all the available space round the organ. The stalls had to lose some rows, those seats were added to the corridors outside the main hall and the doors thrown open so as many as possible could witness the occasion (many in the back row of the Gallery stood, and some members of the orchestra not fortunate enough to play watched from various vantage points in the hall). The President of the Tonhalle Gesellschaft quipped that, had they known how many people wanted tickets, they would have billed the entire season as the “Farewell Season” to boost Box Office takings. He also quipped, as the microphones failed intermittently, that renovation to the Tonhalle was desperately needed (and indeed the hall will close for a few seasons in 2017).

This was not a concert for any critic to nit-pick – it was wonderfully played. Zinman describes himself as the antithesis of Leonard Bernstein and true enough his reading was not showy, utterly coherent, but did not lack emotion. The brass blazed, the strings played as if their lives depended on it. It was as if each principal was adding their own personal “Auf Wiedersehen” (“Uf Widerluege” in Swiss German, even though many orchestra members are not Swiss) to their boss. There was delicacy, sweet simplicity and charm in the slow movement, precision in the Scherzo. Alice Coote shone in a sublime rendition of the “Urlicht”, perfect tone, diction and intonation (including that impossible first note of “O Röschen rot”). I was not so sure about her dressing gown, though.

And then inexorably, with a crash and a bang, on to the final movement, the movement that everyone waits for in this work. The chorus, the Zürcher Sing-Akademie, formed at David Zinman’s behest only a few years ago upon the demise of the Schweizer Kammerchor, were splendid (especially the men) although I did think that, in their dark suits and black ties, they resembled a bunch of undertakers. Juliane Banse (Zinman’s soprano in Zinman’s acclaimed 2007 RCA Red Seal recording of this work) merged mellifluously.

The work is however not perfectly suited to the relatively small shoe-box Tonhalle hall and would certainly benefit from more aural spaciousness (such as in Lucerne). Zinman’s reading tended to keep the volume down as a consequence so the work did not quite overwhelm as it sometimes can.

The work itself has several pointers to departure: the Urlicht is the story of meeting an angel on departure to the other world and the final “Aufersteh’n…unsterblich Leben” signifies some transition and journey to unending life. David Zinman’s departure from the Tonhalle is a major milestone in his and the orchestra’s life; he leaves behind a legacy of memories of first-rate concerts and international tours, and a bevy of highly regarded recordings (including a whole Mahler cycle).

As soon as the performance ended, after Zinman had hugged his front-desk principals, local dignitaries appeared on stage to sing Zinman’s praises; the Mayor, the President of the Orchestra, the President of the Tonhalle Gesellschaft and a surprise guest (to gasps from the audience) – his close friend Alfred Brendel who delivered his praise of Zinman as perfect musical partner in his lilting Viennese dialect. Zinman himself then chose not to say too much, just a pun on the word “goodbye”, admitting in the programme that he is a man of few words, preferring to let his performances and the music do the talking for him. His Mahler Two had said it all, very eloquently.

There were smiles and flowers all round but, very touchingly, the emotion of it all proved just too much for the principal flautist who could not stem her tears.

Zinman’s right-hand man, Dr. Elmar Weingarten, the Intendant of the Tonhalle Orchestra, retired at the same time though the focus fell fairly and squarely on David Zinman. Weingarten to his credit did not want to steal any limelight. It has to be said that the excellent and varied choices of programme, conductors and soloists, not to forget his erudite but straightforward foreword to each programme and fascinating after-concert talks with conductors and soloists, have always been of the highest quality and intellect. Dr. Weingarten has contributed substantially to Zinman’s success in Zurich. Dr. Weingarten remains, thankfully, to direct future Zurich Festivals.

Fortunately David Zinman will not disappear from the Zurich scene entirely. He returns, as Honorary Chief Conductor, to conduct an all Richard Strauss programme in early June next year, and to take charge of his annual conducting master-classes. He will also short bring his beloved orchestra to the Proms and to Edinburgh, giving British audiences a final chance to hear this affectionate and highly professional musical partnership. Members of the orchestra have not quite shed their final tears.