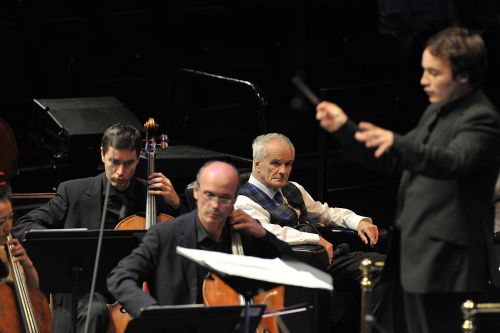 Unlike many such occasions, this concert actually did take place on the composer’s birthday, albeit banished to a ‘late-night’ slot. I wish I could feel greater enthusiasm for the more recent works of Sir Peter Maxwell Davies, at least taken as a whole. Too often, especially during the Fourth Strathclyde Concerto, I was left hankering for something of the violence of Eight Songs for a Mad King, of Taverner, or of Worldes Blis. (When, I wonder, shall we hear the latter again? Or, in my case, hear it for the first time in concert?) One would not, of course, expect any composer to stay the same throughout his career, and it is perfectly understandable that Davies should consider such works those of an ‘angry young man’ and feel the need to do something different. At any rate, it was good to have the opportunity to hear three works of his which I had never heard ‘live’ before.

Ebb of Winter was written last year – commissioned by the Scottish Chamber Orchestra for its fortieth anniversary. I found it the most compelling of the three pieces performed here, having the scale and ambition of a true tone poem.  The opening calls from horns are – and in performance were – arresting. Within a minute or so, one hears them, all almost jazzy syncopation, something more ‘involved’ in a Schoenbergian sense, and the ‘Scottish’ rhythms of the Scotch snap: material and moods aplenty, then, for development, and it is that which most impresses. Trumpets seemed to offer a reminiscence of the frenetic world of The Lighthouse. A stentorian chorale made its mark, both uncertain and certain; so did delicate woodwind solos. The depth of orchestral sound from the SCO under Ben Gurnon belied the relatively modest forces.

The fourth of Davies’s ten Strathclyde Concertos followed, Dmitri Ashkenazy joining the orchestra. Again, the performance seemed beyond reproach, and there could be no gainsaying the composer’s command of line. Ultimately, however, what one might call its ‘meditative’ quality proved a little monotonous – and grey – for me. That is not to say that there were not interesting moments. Following the brief introductory Lento, the second section, Allegro moderato, sounded almost like whimsical Brahms, the example – at least to my ears – of Schoenberg again apparent, if somewhat tamed. (It was the First Chamber Symphony that sprang to mind, albeit with thinned-out texture.) ‘Scottish’ rhythms again were to be heard. The following Adagio was gentle, unassuming, but a bit of an endurance test. That said, a discernible thread continued to be heard, so my disappointment may simply be a matter of taste and/or mood. (It was quite late in the evening by this stage!) The marimba, however, offered some sense of relief. Ashkenazy’s account of the cadenza clearly had its measure, preparing the way for a simple, folk-like melody to emerge, the final section proving numinous, even moving.

The frankly pictorial An Orkney Wedding, with Sunrise followed, the SCO players clearly enjoying themselves, some of them – and the composer, onstage, with Tom Service – being offered a drink of celebration during the performance. There was characterful, at times boisterous playing: just as it should be. The descent into the darkest hours of night was expertly handled, both by the orchestra and by Gurnon. Those more enthused than I by the sound of bagpipes will have loved what came next; the instrument made its point, even as I wondered whether Scottish independence might not be so bad a thing after all. An arrangement of Happy Birthday, apparently made by one of the SCO’s players, rounded off the evening.