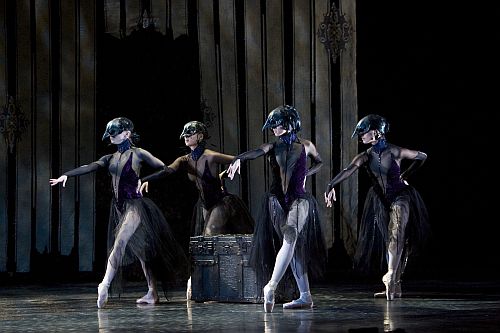 Birmingham Royal Ballet’s 2011/12 season got under way on Sept 28th at their Birmingham Hippodrome home with an old favourite, Beauty and the Beast. With the West Midlands enjoying something of an Indian Summer, the performances on stage and in the pit sizzled in line with the temperatures outside.

The Italian Giovanni Straparola was the first to document the fairy tale on which BRB Director David Bintley based his ballet. This was mid 16th century and since then the narrative has been adapted in every art form. To name but a few there has been: the 1946 Jean Cocteau film, the 1984 Shelley Duvall TV version, the 1994 Menken/Ashman-Rice musical based on Walt Disney’s animation, the 1994 Philip Glass opera and the 2007 Alex Flinn novel set in modern day Manhattan. These variations are testament to the enduring quality of its story, so in 2003 Bintley decided to add a ballet version to the list. Judging by the entertaining presentation at the Birmingham Hippodrome on 28th Oct, it was an inspired choice. In Bintley’s own words there was ‘the contrast between the inherent appeal of the natural world and the animals in it, and the awful things humans do to that natural world and themselves’. This theme plus the redemptive finale gives the ballet some appetising ingredients; together with Bintley’s recipe it produced a delicious feast.

Bintley covers the guts of the story with a prologue and six scenes. He made the action in every division clear and precise, each with its own delightful feature. In turn, I picked out: the flamboyant swish of the Woodsman’s cloak; the removal of the wardrobe by the Bailiff’s men; the focus given to the rose stolen by the Merchant; the disbelief when the trunk is opened to reveal its contents become worthless; the fantastic gathering of animals and their collective movement at the ball; the wedding breakfast prepared for Cuchon’s brides; the return of the rose that made for the happy ever after ending.

These incidents within the plot were helped enormously by the coordination of Philip Prowse’s faultless designs. The contrast between the destitution depicted by the bankrupt merchant’s house and the lavish style of the affluent beast’s castle were palpable. And the slick interchanges of stage crew and Hippodrome machinery between the brief scenes dividing Act I could only be admired. Credit must also go to the lighting of Mark Jonathan. He got the balance between light and dark just right: sufficient to see what was happening in the forest scenes whilst retaining a degree of menace. The Prowse/ Jonathan combination plus the costumes of the animals added to Bintley’s out-of-this-world experience.

Canadian composer Glenn Buhr provided the music; I found it somewhat mixed – a ballet of two halves. I thought the music for the first act was rather stunted and unappealing, failing to allow the dancers time to put more than a few steps together.  And whilst the storm scene produced the usual flashes and thunderclaps, I thought the orchestral contribution rather weak. Nevertheless I liked the emphasis Buhr gave at times to the xylophone and harp. However the music of Act II flowed and displayed many tuneful sections. The atmosphere generated in the final scene after the curse had been lifted was sonorous and poignant.

Welcoming his fans to this season’s opener in the programme, Bintley said that, he was ‘delighted to be back home after a summer break’; we felt the same. But there was no sign of rustiness from the BRB corps de ballet. They were on top of their form in the ensemble numbers. Their roles were diverse with some distinctive highlights: the birds who whisked Belle off to the castle were so buoyant, seeming to float around the stage. Likewise as the guests at the ball, they were both in step, yet individualistic according to their species. The quartet of ravens was as creepy as any of Hitchcock’s birds!

The principals of the BRB performed equally well. Nao Sakuma was Belle, the beauty of the piece. Her characterisation in Act I as the lovable, undemanding daughter of the merchant came across in her body language, particularly when she resolved to honour her father’s bargain of promising her to the Beast – reluctant yet obedient. But like all good fairy tales when it all came right in the end, her pas de deux with Iain Mackay as the Beast turned Prince, was ballet dancing at its finest. Mackay is one of BRB’s most valued leading men, his classical good looks and galant movement made him a perfect Prince. But as the Beast he displayed other attributes –villainous and fearsome. When the merchant picked a rose to take home to Belle, Mackay’s rage was unconfined. And his dance with Laura-Jane Gibson as the vixen in human form was another highlight. Indeed the grief of Gibson, mopping the fevered brow of the Beast near to death, was a moving sequence. As Belle’s two sisters, Victoria Marr and Samara Downs also caught the eye, particularly in the wedding scene, vying for the hand of Monsieur Cochon. The antics of Jonathan Payn as the dandy Cochon were camp but never over the top. Assistant BRB Director Marion Tait also raised a smile as a crone of a grandmother.

The next offering in BRB’s autumn season begins on Oct 6th. It is a triple bill of distinguished and contrasting ballets. Checkmate is 75 years old but retains its place in the repertory with music by Sir Arthur Bliss, designs of E McKnight Kauffer and choreography from Ninette de Valois; it prophetically anticipates the merciless savagery of World War II. The piano and orchestral score for Symphonic Variations is derived from the music of César Frank; it features six dancers and is one from the incomparable output of Frederick Ashton. The best of Gilbert and Sullivan is given a comic choreographic touch by John Cranko in Pineapple Poll – guaranteed to send the audience home with a smile on their face. Just like this Beauty and the Beast did, it was a beaut!