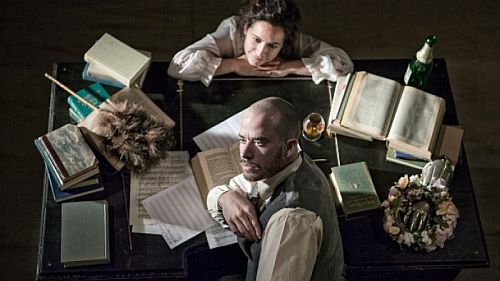 My trip to Germany began with a rarity, Meyerbeer’s Dinorah, and continued with another, this one by German composer Karl Amadeus Hartmann (1905-1963). He was one of the musicians who suffered the consequences of living in Nazi Germany, not for religious reasons as did many of his colleagues, but for political ones. In the 1920s he joined the Socialist Party, and his relations with the Nazis were always more than problematic. His music was banned, although previously he had refused to allow any performance of his works in Nazi Germany. In fact, in those years his premieres took place in Vienna and Prague, before both cities became part of the Third Reich.

Hartmann is generally considered to be one of the great symphonists of 20th century, with a stunning production of eight major symphonies. In the field of opera, prior to the rise of the Nazis he wrote five short works, three of them unfinished, but his most important opera is Simplicius Simplicissimus. Its original version, Des Simplicius Simplicissimus Jugend, was premiered in a concert version in Munich in 1948; the first staged performance took place in Cologne the following year. Hartmann wrote a second version of the opera – Simplicius Simplicissimus – that was premiered in Mannheim in 1957.  Since then there have been few opportunities to see the work until Berlin’s Staatoper decided to offer it this season in a small, intimate environment.

Simplicius Simplicissimus is the title of a 17th-century picaresque novel by von Grimmelshausen that narrates the horrors of the Thirty Years War. The protaganist, the simple and peaceful Simplicius, was greatly popular, and Hartmann appropriated the character to write an opera showing the parallels between the horrors of the Thirty Years War and the Nazi regime. He was really anticipating events, since the opera was composed between 1933 and 1934, several years before the coming war.

The first and third scenes show the excesses and violence of a totalitarian regime. In the second we witness the encounter between Simplicius and the Hermit, who seems to come straight out of the 17th century and leads the protagonist to his pacifist stance and simple life. The opera, offered here in the original version with a small orchestra, is not one to enter the main repertoire, but it is of interest for opera lovers.

The Staatsoper Berlin remains in exile at the Schiller Theatre while work continues at Unter den Linden. The opera was performed in the theater’s Werkstatt, a large room which I assume is used for rehearsals. There were a few seats placed close to the room’s walls, leaving a central space that served as a stage. The production is very simple and imaginatively solves the limited possibilities of the room. Scene I focuses on the famous night of book-burning in Germany, and the violence of the soldiers is very well done. The last scene, with the excesses of the Nazi regime, its deviations and abuses, is also successful, and the opera ends as it began with a narrator talking about the number of people dead in the Thirty Years War.

Adrian Heger, assistant to Daniel Barenboim, conducted carefully and assured that interest never faded. Under his baton were members of the Staatskapelle Berlin, while the chorus was formed by students at the Staatsoper Opernstudio.

The soloists were all rather unknown young singers. The most interesting was the interpreter of Simplicius, soprano Anna Alas i Jove. Tenor Magnus Hallur Jonsson was good as  the Hermit. Jonathan Winell was the Governor (here a Nazi leader), while Jakob Ahles was responsible for different characters, and their work was always fine. Thomas Schumacher as the Narrator was excellent.

The Werkstatt can accommodate something under 200 people, and it was sold out. The audience gave a warm reception to the artists. Nobody left the room during the performance.