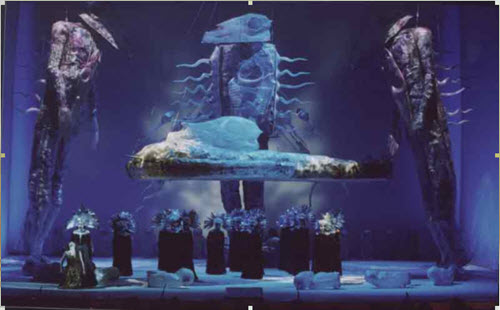 The production of the entire Ring cycle at the Mariinsky is by the artistic team of Valery Gergiev and George Tsypin (the latter also designed the sets). For Die Walküre there is a bare stage with some of the megalithic figures from Das Rheingold. Three of these huge figures, topped with a big block of stone, form the house of Hunding. In Act II we again have the three megaliths, but the big stone has moved to the floor of the stage. Finally, in the last act, a fourth figure is added as the place where Brünnhilde will remain asleep. Once again, the costumes are somewhat timeless: Wotan appears in a black robe, and the Valkyries wear attractive black gowns and strange headdresses. The lighting remains the most notable part of the production, but this time the Magic Fire was disappointing. The staging is not unpleasant, but I find the permanent presence of these large stones too boring.

Valery Gergiev’s musical direction was superb, far superior to that offered yesterday in Das Rheingold. Act I was spectacular, as was Act III. Perhaps the second act fell a little short, but it was still at a high level. Mr. Gergiev’s tempos were significantly slower than those of Kirill Petrenko in Munich: the performance ran some 22 minutes longer. This was an overwhelming musical version, splendidly served by the excellent Mariinsky Orchestra.

The performance was dedicated to the jubilee of Olga Sergeyeva who sang the part of Brünnhilde. She is one of the most important Russian dramatic sopranos of recent years, and has been a constant in the Mariinsky’s Rings. Obviously, she was duly celebrated by the audience, while the singers, and Valery Gergiev in particular, pushed her forward again and again for solo bows.

The impression I got is that she is not a true veteran singer, judging by her stage presence and the freshness of her timbre. However, her voice shows unmistakable signs of fatigue, with a very wide vibrato that is rather upsetting. To this one must add that the high notes are more than problematic. It’s a pity, since she is an important singer and interpreter who dominates the character and is very expressive in her singing.

Russian bass Vladimir Feliauer as Wotan left a favourable impression. His voice is attractive, powerful and very well handled. Given the current panorama of interpreters of Wotan, he should have an excellent future because there are not many voices like his. He also knows how to move the audience singing “Leb wohl.”

Soprano Mlada Khudoley made a remarkable Sieglinde. Her voice is nicely suited to the character, and she moves about the stage with ease. The top notes do not create any problem for her, and she seemed somewhat weaker only at the bottom of the range.

I cannot say the same of Dmitry Voropaev as Siegmund: his vocal quality is weak and he is not a heldentenor. A glance at the roles he usually sings makes it clear that Siegmund is not for him. He can be a good Tamino, but not Siegmund.

Once again, Ekaterina Gubanova in the part of Fricka gave a strong performance, one of her best that I can remember. Finally, Mikhail Petrenko was fine in the part of Hunding, with good volume and some whitish sounds at the top.

The Mariinsky was at about 95% of capacity. The audience was enthusiastic with the artists at the final bows, particularly with Olga Sergeyeva and Valery Gergiev.