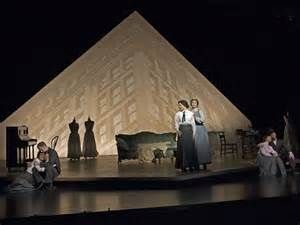 Composer Ricky Ian Gordon and playwright-librettist William M. Hoffman have crafted what could be one of the finest works for the American lyric theatre to come our way in many years, if only they could trim its running time of slightly less than three hours by a third. As it now stands, their Morning Star is shaped as a series of vignettes, some humorous, some dramatic, some inhabiting a kind of 1940’s American Realism (the theater of Sylvia Regan’s time and of the play of the same title, on which this opera is based), some overreaching for a Brechtian style more appropriate for sweeping social epics than for an intimate drama about a Jewish family in America.

Gordon’s musical language is tonal, eclectic in its use of Jewish-inflected, American-musical theatre melody, and vibrantly varied in its orchestration, and he knows how to write for the voice, as evidenced by his well-known cabaret and concert songs. His seamless interweaving of arioso passages and imaginative ensembles is impeccable and inspired. All he and his lyricist now need is a third pair of ears with a good pair of scissors and a keen eye for restructuring.

Morning Star tells the multi-layered story of Russian-born immigrant Becky Felderman, who has brought her three daughters and one boy to America in search of a better life. The tragic Triangle Shirtwaist Factory fire, domestic strife, familial vicissitudes, the Great War, and all kinds of life challenges play a part in the story of this Jewish family in search of an all-too-elusive American Dream.

In the fourteen-person cast, nobody does anything other than sing and act their hearts out, as members of one of the finest ensembles I have had the joy to watch and listen to in several seasons at the Cincinnati Opera. Jennifer Zetlan, Elizabeth Zharoff and Elizabeth Pojanowski play the three daughters, and Morgan Smith, Larry D. Hylton, Andrew Bidlack and Andrew Lovato are outstanding in multiple roles, from Jewish family members and lodgers, to suitors and street vendors. Bass-baritone Kenneth Shaw opens and closes the opera in a memorable turn as a Rabbi singing the Jewish Prayer for the Dead.

In the company of veterans, several talented singers make their professional debuts and hold their own, such as tenor Spencer Viator, vocally and dramatically convincing as 18-year-old Hymie Felderman. Trinidadian soprano Jeanine De Bique is memorable as Pearl, a girl from the rural South who has come to NYC in search of a better life. Mezzo-soprano Adria Caffaro is charming as a teenaged Irish immigrant who perishes in the factory fire, and the full-voiced mezzo-soprano Leah de Gruyl is vocally impressive as her grieving mother. Thirteen-year-old Owen Gunderman is a promising young actor,  in the speaking roles of the young Hymie Felderman, and Hymie Tashman, Becky’s grandson.

Conductor Christopher Allen paces the performance flawlessly, accompanying the cast with a chamber orchestra, and has an acute ear for the difficulties inherent in singing English intelligibly. He is always aware of the singers’ needs.