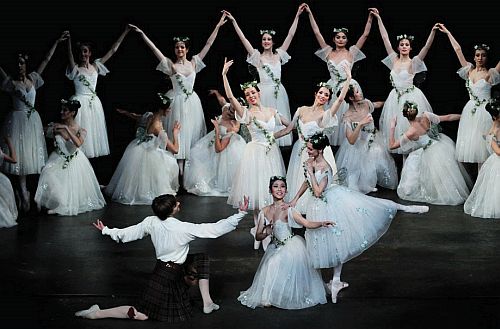 The ‘Bournonville La Sylphide,’ say dance writers Mary Clarke and Clement Crisp in Ballerina: The Art of Women in Classical Ballet, ‘provides us with one of the most precious insights into the dance of the Romantic age’. First performed at the Royal Theatre in Copenhagen in 1836, but set in Scotland, it is more cautionary tale than love story. The sylphide of the title lures a discontented crofter away from his betrothed, only to die in the second act when he unwittingly places a poisoned scarf (the gift of a malevolent witch) around her shoulders. The crofter himself then dies of a broken heart.

The Queensland Ballet’s staging of the work was choreographed by Peter Schaufuss, ‘after Bournonville’, in 1979. ‘The Bournonville style runs through the veins of our Schaufuss family,’ the choreographer claims in the introduction to the programme. His parents, who were both principal dancers with the Royal Danish Ballet, first appeared in La Sylphide nearly a century ago. His son and daughter both take parts in the current production.

On a night that was not the press night, with a cast that must not have been the first cast, with three male dancers as accomplice witches who come close to being too reminiscent of The Rocky Horror Picture Show for the ballet’s own good, there is still a strong sense of a past unwrapped as if from tissue paper about most of what happens on the stage. Also about what doesn’t happen. Unlike the heroines of later classical ballet, the elusive sylphide (Yanela Pinera) is never lifted off the ground by her partner.

Pinera, the only dancer in the first act to be on pointe, looks tanned and healthy but conveys otherworldliness through trembling bourrées, fluttering fingers, and outstretched arms. Most of all she conveys it through eyes that gaze at her unattainable object of desire (guest dancer Qi Huan). His earthly betrothed (Sarah Thompson) performs folk-like dance in character shoes, and is an altogether more upright, frontally presented figure on the stage.

The upright, frontally presented figures of both male and female dancers predominate. Their jetés, entrechats and frequent jumps are gentle, but to perform them in the Bournonville style requires a particular skill. ‘Don’t use the muscles in your arm to swing you off the ground,’ the Danish dancer Johan Kobborg told Royal Ballet colleague Marcelino Sambé when coaching him in this style during an Insights talk on the male dancer at the Royal Opera House in 2013. ‘It’s got to come from your abs.’ ‘Don’t turn your head. It’s épaulement.’

Kobborg showed respect and affection for the style in which he had been trained. Judging from the women and the men of the Queensland Ballet, Peter Schaufuss feels the same. La Sylphide does not provide an evening of searing emotion. For that, perhaps, a pas de deux (with lifts) is necessary. The drama is in the dancers’ ability to lift themselves into the air  something that the witch, old and lame, can not do. The shock, at the end, is not that the sylph dies but that doing so she comes down from her pointes.