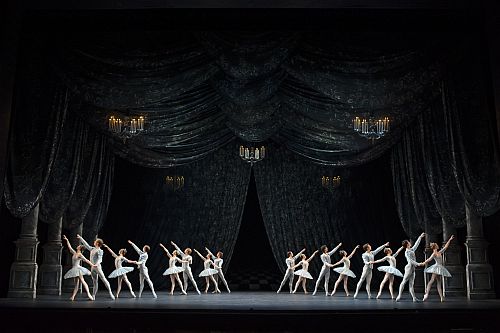 From chandeliers, to autumnal sunlight, to flickering flambeaux; if there is one thing that links the works in this triple bill, it is an increasing darkness of appearance and tone. David Bintley’s The King Dances, the longest and the last performed, premiered this year. With a score by Stephen Montague that does more than simply create atmosphere like a film soundtrack, it is the powerful depiction of a vulnerable and abused Louis XIV and of Cardinal Mazarin, the man who controls him. Like his earlier Carmina Burana, Tombeaux, Flowers of the Forest and ‘Still Life’ at the Penguin Café, it suggests that as an artist David Bintley shares Henry James’s ‘imagination of disaster’.

The chandeliers belong to Balanchine’s Theme and Variations. Their light reflects in the tiaras that adorn the heads of the high-kicking women in this ‘tutu ballet’ from 1947. As the ‘ballerina’ among them, Mimoko Hirata may not have the long legs of the choreographer’s ideal female dancer, but she does have the speed, in legs and arms, he required. She is also confident enough to play with the movement.

When The Royal Ballet performed Balanchine’s The Four Temperaments (also from 1947) at the beginning of the year, the greatest applause was for its male dancers. Here, Mimoko, Delia Mathews, Yvette Knight, Céline Gittens and Samara Downs are the dancers you notice. The ballet itself sparkles rather coldly. There is not the wistful quality of the choreographer’s earlier Serenade, or later Jewels. The Tchaikovsky music, the chandeliers, the tiaras and the echo of the grande défilé serve most of all to illustrate the dance critic Edwin Denby’s point, referred to in Peter Stoneley’s A Queer History of the Ballet: ‘There is an interesting intellectual torque in Balanchine’s work, with a sense that “like a classic” is more interesting than “classic”.’

The autumnal sunlight falls on Frederick Ashton’s Enigma Variations (1968). A series of choreographic portraits, this shows Edward Elgar, the ageing composer of its score, with his wife and friends in an Edwardian country house and garden. Where the Balanchine merely sketches in the detail of its setting, the Ashton provides elaborate scenery, period costume and props. Yet space is left for the delicate footwork, the épaulement and the skimming lifts that make Ashton’s work so different from Balanchine’s. This chance to see the two, contemporaneous choreographers side by side brings to mind the words of the dancer Daniel Pratt in the October 2013 issue of Dancing Times: ‘In Ashton’s ballets, you feel circular from the solar plexus outward; with Balanchine, you feel skewed from your hamstrings upward.’

Episodic, perhaps dated, Ashton’s piece develops a plot with a happy ending at the last minute: a telegram arrives to tell the composer that his Enigma Variations has been accepted for performance. Among the portraits presented, Yijing Zhang as The Lady resembles an Isadora Duncan (one of Ashton’s muses) on pointe. She seems to express, momentarily at least, the very particular, very deep feeling released, in the also ageing choreographer, by the figure of the single, female dancer.

Angela Paul, Elisha Willis, Tzu-Chao Chou (his fouetté) show the supple waists, feet, hands, upper backs and lower legs one imagines Ashton would have wanted. Alternatively, they could be dancing the ‘something that looks like Ashton’ about which Lynn Seymour, in Barbara Newman’s recently published Never Far From Dancing, complained. It depends which critic you read.

The King Dances is so different from the two preceding works that it rather cancels out the effects of both. Taking its inspiration from Le Ballet de la Nuit, performed over the hours of one night at the Louvre Palace in 1653, it is divided into four ‘watches’ representing a timespan from six o’clock in the evening to six o’clock the following morning. This explains the flambeaux and the surrounding blackness, one that is intensified by a reflective, black floor.

Watching a piece by David Bintley you can always feel danced at, instead of to, or for, or even in front of. You can feel it watching the flambeaux-bearing Messieurs here. But when the person dancing at you is Tyrone Singleton, in the role of Cardinal Mazarin as La Nuit, this hardly seems to matter. There is a demonic force in the way the dancer stamps his feet, clicks his fingers and stares out at the audience. As an androgynous Louis XIV, William Bracewell performs the arabesque in a way that explains why Debussy thought it the most beautiful shape in nature.

Yijing Zhang works hard in The Second Watch as Selene, la Lune, but her extended duet with Bracewell seems less relevant to the piece than the much briefer duet between Bracewell and Singleton in The Third Watch. Theirs is not a duet about love, or even attraction; it is about the manipulation of a weaker person by a stronger one.

This watch is the darkest. After the duet, Tyrone Singleton appears in red and black as Le Diable. In his nightshirt, Louis is held aloft by demons and carried about like MacMillan’s Manon Lescaut. He is then gang-raped swiftly, twice (in case you missed it the first time). In The Fourth Watch, from three in the morning until six, he is revealed, centre stage, wearing a gold suit and a gold sun that forms a halo at the back of his head. ‘Honour, Grace, Renown and Valour pay homage’; Cardinal Mazarin proclaims ‘Regardéz le roi!’. The audience knows what lies behind his words; the audience is still getting over the shock of it. As I said: ‘the imagination of disaster’.