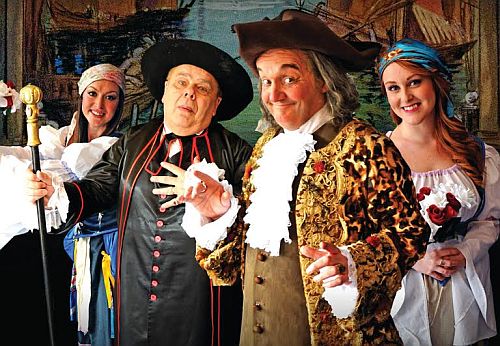 It was good to return to the magnificent surroundings of the Grand Theatre, Blackpool,a theatre designed by Victorian architect Frank Matcham, for Gilbert & Sullivan’s The Gondoliers. Although probably ranked behind The Pirates of Penzance, The Mikado and H.M.S. Pinafore in audience popularity The Gondoliers is still one of the most admired of the G&S Savoy Operas. Premièred at the Savoy Theatre in 1889 it ran for very successful 550 or so performances on its London run and is still a favourite of amateur light opera and G&S societies today. The story concerns the Palmieri brothers Marco and Guiseppe, both Gondoliers, who marry two local girls Gianetta and Tessa. They become embroiled in a royal dilemma when it is revealed that owing to a mix-up of babies one of them is now the King of Barataria.

Director John Savournin’s new production of The Gondoliers with the National Gilbert & Sullivan Opera Company is infused with warmth, colour, wit and considerable charm. Set traditionally in mid 18th century Venice, Stephen Holroyd’s sets were relatively simple yet effective setting off Tony Brett’s stunning detailed and vividly colourful costumes with each character having a costume change. Stealing the show with his slick comedy acting and impressive patter was Richard Gauntlett as The Duke of Plaza-Toro, a Grandee of Spain; while the Duchess, played by Sylvia Clarke, made a convincing foil. To suit his elevated social status Gauntlett was most splendidly attired, as were his wife and daughter. The Duchess’s song On the day when I was wedded was agreeably performed by the mezzo-soprano and their daughter Casilda, played by Elinor Jane Moran, revealed a satisfying, bright soprano with a strong projection. I enjoyed Casilda’s duet O Rapture, When Alone Together with drummer boy Luiz the Duke’s attendant played by Oliver Wright who coped well pitted against such an excellent soprano voice. I look forward to hearing Moran in a more substantial role. The Palmieri bothers Giuseppe and Marco, both Gondoliers, played by Kevin Greenlaw and Robin Bailey were a well contrasted pair. Bailey a tenor has a bright, well focused voice and smooth delivery even when forced, and a highlight was his appealing singing of Marco’s Take a pair of sparkling eyes. In the role of Giuseppe, the bearded Greenlaw gave an acceptable performance with a good stage presence, displayed a somewhat restricted projection when both speaking and singing, but coped well.

Red haired, local girls Gianetta and Tessa, played by Claire Lees and Una McMahon, excelled in their roles. Soprano Lees has a light, bright very attractive voice that she strongly projects. Extremely comfortable in her high register Lees sang Kind sir, you cannot have the heart to the Grand Inquisitor and increasingly gained in confidence and acted well. McMahon a mezzo-soprano has a well rounded, cheerful voice and she provided a most appealing solo with When a merry maiden marries. Although one is a soprano and the other a mezzo their voices were not as strongly differentiated as I would have ideally wanted. A striking performance as the Grand Inquisitor was given by Bruce Graham a singing actor who certainly looked the part in his bright red, floor length cassock and zucchetto. A seasoned G&S performer Graham was in his element displaying his strong, clear baritone and extremely comfortable with his acting, moving easily from seriousness to comedy. Clearly well coached it was hard to fault the unity of the chorus and the dancing was slickly managed. After one or two early intonation issues the eighteen strong National Festival Orchestra soon settled down to provide first class accompaniment under the baton of conductor James Hendry who drove the music along with real enthusiasm.

The Gondoliers is one of three G&S productions that the National Gilbert & Sullivan Opera Company are currently touring with, including The Mikado and H.M.S. Pinafore. Directed by John Savournin this was a sparklingly colourful and thoroughly entertaining production of The Gondoliers set off by the splendour of The Grand Theatre, Blackpool.