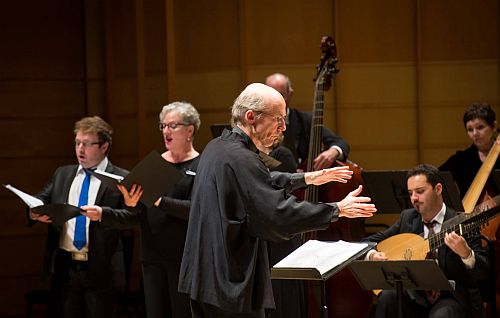 Vancouver has had its usual bevy of Christmas concerts this year, but the last of these which explored the rather unusual and refreshing terrain of Michael Praetorius’ Christmas Vespers, really stood out.  This performance was guided with strong commitment and scholarly awareness by Canadian conductor David Fallis, currently director of the Toronto Consort and Opera Atelier, who has had great success in performing this setting in the East and now presents it in a number of Pacific Northwest cities.  Fallis brought out a splendid response from the thirteen hand-picked ‘soloists’, the Laudate Singers, and a distinguished ‘authentic’ band including cornetti and sackbut ensemble La Rose des Vents, while imparting great strength and resilience to this naturally attractive and sometimes innovative music.

The conductor has obviously done considerable thinking into how to recreate a Christmas ‘vespers’ service in a way that is faithful to north German practice of the 17th century.  While Praetorius’ four parts of the Magnificat are the musical core, the selective insertion of popular ‘carols’ of the period and the participation of a congregation – here the local Laudate Singers — are conjectured to be firmly in line with historical tradition.  While attempting to cultivate participation by the audience too might seem to be stretching things, having a chorus of an extra 1300 singers in a few stanzas of the opening and closing numbers actually seemed to increase engagement and the sense of occasion, rather than dilute it.

Aside from the sheer quality of the singing, there was an extra sonic-visual component at hand.  The opening antiphonal and echo effects, indeed executed very alertly by the soloists, were just a prelude to a host of spatial effects that would come into play as the concert proceeded: a group singing as they walked down the theatre aisle, sopranos singing from different spots in the upper balcony, then set apart in corners on the auditorium floor, and so on.  These could have come off as somewhat contrived, but I found they worked very well, perhaps imparting an appropriate feeling of wonder and space.  It was the sopranos, anchored by Jolle Greenleaf, who did most of the travelling, and all cultivated beautiful clean lines and an admirable sense of style.  I probably thought the women were slightly more beguiling than the men — perhaps they should be — but the variety and individuality offered by the male soloists was sheer pleasure too.  There was no shortage of virtuosity anywhere.

For all the transparent textures and strong characterization that David Fallis achieved, what impressed me most is that there was a real fire and sinew underneath it all.  At selected moments one could really feel ‘the heavens opening up’ as the orchestra and choir exploded forth with brilliance, splendor and decisive power.  Of course, some of this derives from the Monteverdian ingredients that the music has, but there was no doubt Fallis’ ability to tighten the grip at key points made things dramatically special and allowed the music to always progress forward with the right sort of anticipation.  The first taste of this was in his magnetic command of the Credo, though the same was amply present throughout the Magnificat too, especially in Magnificat I and III, which were outstanding.  I also found that I was made aware of the subtle harmonic innovations that Praetorius introduces in these big sections.

The carols and the two purely instrumental sections made for an effective contrast, bringing a degree of contemplation and repose.  Most important, they managed to suggest pastoral feelings, and the right sort of heartfelt innocence was often present in the singing.  Fallis got a nice ‘bite’ and sharply-etched phrasing from all of us in the closing ‘In dulci jubilo’, though I admit that I was somewhat caught up in trying to figure out whether I should sing as a tenor or as a baritone.  It turned out that I sang as neither, probably the only scar on this inspired re-creation.  With impeccable instrumental address and style, I think this concert was as good as it gets, and fully worthy to rank alongside the other big co-productions that Early Music Vancouver has given us this year.