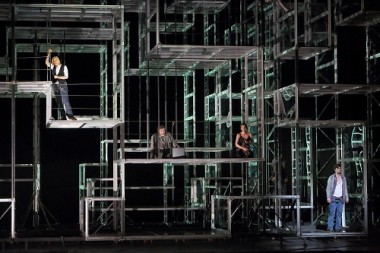 This stage production by Calixto Bieito had its premiere in the Nationaltheater in December 2010. It was poorly received at the time, and the same thing happened two years later in London. Mr. Bieito shows no respect for the original Fidelio libretto, eliminating dialogue and replacing it with texts by Jorge Luis Borges and Cormac McCarthy. He has decided to start with the Leonore Overture No.3; and, at the end of the dungeon scene, he inserted the adagio from Beethoven’s String Quartet, Op. 132.

It seems to me that Bieito is perfectly within his rights to dislike the Sonnleithner libretto, but then it would just make sense not to accept the commission of a new Fidelio production. It’s unacceptable for a régisseur to stick his hand into the libretto and score. For less than this, Poulenc’s heirs have sued Dmitri Tcherniakov because of liberties he took with Dialogues de Carmelites in Munich. Of course, there are no Beethoven heirs, apart from the fact that international copyright protection doesn’t cover such a long period of time. But I do believe Bieito and the theatre should not announce this opera under the title of Fidelio; at best, it’s based on Fidelio. It  makes a difference.

The staging is basically pretentious. There is a kind of labyrinthine scaffold of plastic and neon where the characters and extras move continuously without finding the exit. On simply gets bored with so much movement by people wearing harnesses to avoid accidents. Bieito’s “originality” means that you need to know the opera well in order to understand what’s happening. The costumes are modern, and the so-called prisoners wear suits and ties, as if they were employees. For Bieito, jail and office appear to be the same thing. The eccentricities reach their peak in the final scene when Don Fernando, a sort of clown with a painted face, has nothing better to do during his monologue than to shoot Florestan, who falls to the ground. But later, as the final chorus requires Florestan’s presence, we witness his resurrection.

Zubin Mehta was the conductor, in one of his few appearances in Munich since leaving the musical direction of the theatre in 2006. Clearly the Munich audience retains a magnificent memory of his years here, given the cheering when he entered the pit, but I found him less than convincing. I’ve had numerous opportunities over the years to attend his performances of Fidelio, in both Munich and Valencia, and this was not among the best. I understand that it must be very difficult to conduct the opera with the production aberrations in full sight, but I always expect the best from Zubin Mehta, and this time I didn’t get it. There’s no objection to be made about the performance of Bayerische Staatsoper’s orchestra  and chorus. I have the feeling that this music is in their genes.

The protagonist was Anja Kampe, who was a convincing Leonore, with an attractive voice and a very intense and nuanced interpretation. However, she was pushed to her limit in the top notes, bordering on a yelp on more than one occasion.

Veteran Peter Seiffert was Florestan and his performance in vocal terms was more convincing than in the past. His aria in the dungeon was brilliant, and with less vibrato than expected.

Franz-Josef Selig was Rocco, whom this production presents as alcoholic and unscrupulous. His performance was correct though not particularly bright.

Tomasz Konieczny did really well in the part of Pizarro, both singing and acting. It’s not his fault that the confrontation with Leonore in the dungeon scene caused the audience to laugh when she hit him on the head with a bottle.

There was an excellent performance from soprano Hanna-Elisabeth Müller as Marzelline. Her voice is appealing and beautifully projected, and she sings with gusto. She also showed great aptitude for climbing, with and without a harness.

Tenor Dean Power left a good impression as Jaquino, and Steven Humes was well-suited to the role of Don Fernando.