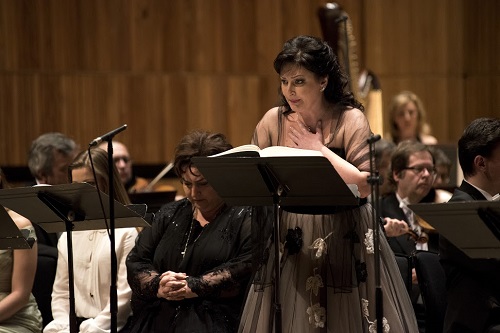 Some people, it seems, are never satisfied. (Is that a tu quoque which I hear before me? Surely not.) I heard a few people during one of the two intervals during this wonderful Jenůfa lament that this was not a staged performance and therefore could not do the work justice. Well, if you felt that strongly about it, you might perhaps have considered not going… I actually very much enjoy many concert performances: not as a substitute, nor indeed as the ‘same thing’. They have their own virtues, not least the greater ability to hear the orchestra – no negligible thing, when the orchestra in question is the Czech Philharmonic. At the risk of sounding unduly reactionary, I also like on occasion not to be distracted by an inadequate production; that, of course, is an argument against inadequate productions, rather than staging as such, but let us leave that now for another day.

For me, perhaps the greatest single virtue of this particular performance was the playing of the Czech Philharmonic. I think this might actually be the first time I have had opportunity to hear this great orchestra ‘in the flesh’; it is difficult to imagine that I could readily have forgotten a previous encounter. What surprised me somewhat was that it did not sound quite so much as I had expected from (largely old) recordings. Its golden sound actually sounded to me in many respects more Viennese than Czech (or at least Moravian, for this is of course a Bohemian band). The beauty of the strings had to be heard to be believed; this was not unlike the Vienna Philharmonic on a good day (perhaps in the celebrated Janáček recordings under Charles Mackerras), or even the nearby Staatskapelle Dresden. Horns, likewise, seemingly straight out of Tannhäuser, perhaps via Bamberg. And the delectable woodwind solos would have graced any orchestra in the world, whilst retaining a sense of that most contentious of ‘national’ or ‘regional’ claims: rootedness in place.

None of that, however, was ‘mere’ beauty. What struck me about what I heard from all sections and all instruments of the orchestra, as well as the ensemble as a whole, was how, under Jiří Bělohlávek’s wise, intelligent, loving direction, what little I know (mostly from Janáček’s music!) of Czech speech rhythms truly seemed to ‘speak’ in the orchestra as well as in the vocal line. Just as much as Mussorgsky, this was instrumental recitative and arioso brought to lyrical life. Bělohlávek’s tempi were varied, with plenty of time for relaxation as well as for pressing on; above all they sounded ‘natural’.

That bringing to lyrical life to which I referred was also much to be heard from a fine cast. The sheer goodness of Jenůfa’s soul – a Czech Hardy, I often think, in this work – was to be heard in Adriana Kohútková’s performance. The compassion this Jenůfa had in abundance was ultimately to be repaid. Jaroslav Březina’s initially swaggering Steva had its subtleties too. His was an admirably balanced portrayal, in which this listener at least felt no need of a staging. Likewise Aleš Briscein’s Laca, whose initial petulance was but the start of a development of character with which we could truly sympathise. What singing, ‘purely’ as singing too! The Puccinian element of the relationship between Laca and Jenůfa was apparent, but so was the difference of Janáček: no sadism here. Karita Mattila’s Kostelnička was earth-shattering, an extraordinary move from the title-role (she was my first Jenůfa, in Bernard Haitink’s magnificent Royal Opera performances). There is no denying Mattila’s ‘star quality’: when she stands, let alone when she sings, everyone in the hall will sit up. This, however, was a deeply felt performance, too, the richness of her voice again the quintessence of compassionate humanity. Yvona Škvárová’s Stařenka seemed less a portrayal than an inhabition. Indeed, all of the roles, however ‘small’ or large, were very well taken: a lesson to opera houses of the incalculable blessings of a real sense of ‘company’. To round things off, the choral singing, from the Czech Philharmonic Choir of Brno, was outstanding: here, perhaps was something a little rougher than what we had heard in the orchestra, even, dare I say it, more Moravian.