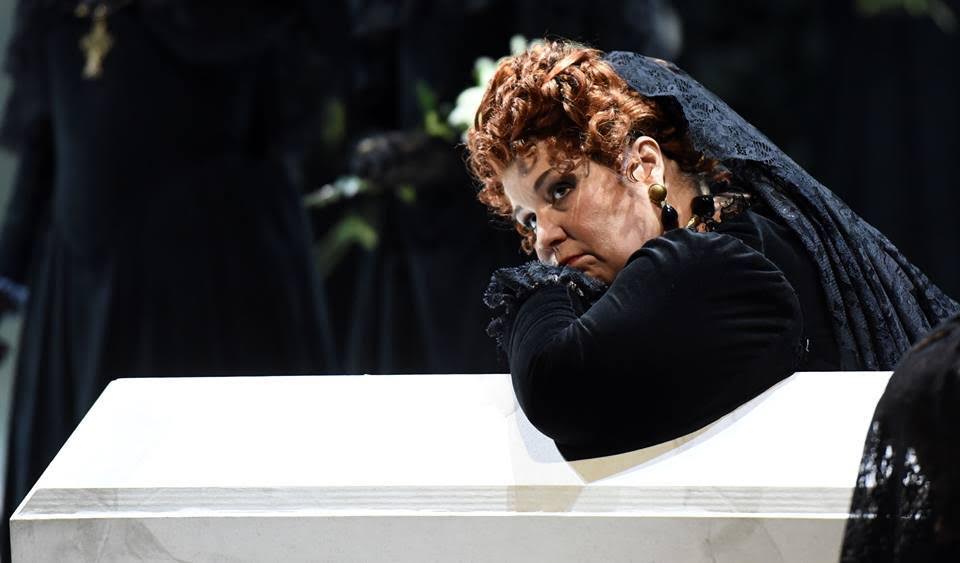 The 2016 Verdi Festival opened with a new production of Don Carlo on 1 October in the Teatro Regio di Parma. Il trovatore will play in the same theater, along with Giovanna d’Arco at the nearby Teatro Farnese and I masnadieri at the Teatro Verdi in Busseto, as the main offerings in the month-long festival. This is Verdi country, and festival goers routinely visit other nearby towns linked to the composer. The little theater in Busseto is directly across the street from the house of Antonio Barezzi, the wealthy grocer who spotted the young Verdi’s talent and sponsored him. His daughter, Margherita, was the composer’s first wife, and died at the age of 36 after only four years of marriage. Verdi disapproved of a theater in Busseto, and neither attended its opening nor ever stepped foot inside it. The small town is midway between Roncole, where the composer was born, and Villa Verdi in Sant’ Agata, where he lived with Giussepina Strepponi, the soprano who created the role of Abigaille in Nabucco and became his second wife.

Conductor Daniel Oren put his personal stamp on Don Carlo. Although there were the expected moments of high drama, what was most impressive was the sense of musical line, the transparency of the orchestral playing, and the atmosphere of quiet and repose that he achieved throughout. Perhaps this approach was driven in part by necessity as, with one notable exception, none of the voices were of the size called for in one of Verdi’s grandest operas. Oren’s approach, however, yielded unexpected delights throughout the performance. Seldom is Princess Eboli’s Veil Song (sung by Marianne Cornetti) so subtle and sensual, due to the clarity and delicacy of both singer and orchestra. The chorus likewise responded to Oren’s baton, especially in the auto-da-fé scene where it sounded magnificent.

Director Cesare Lievi took a staid, literal approach to this complex and confusing tale of romantic and political intrigue. He played by the book, sticking to what the composer intended, but did little to illuminate the characters’ motivations and stitch together the disjointed plot. The auto-da-fé began with a brief but duly impressive procession of red-garbed clerics, followed by a parade of carts containing and pulled by the bloodied sacrificial victims, who had clearly been subjected to gruesome tortures. The Celestial Voice (sung by Marina Bucciarelli) was barely audible, as the assembly looked off into the distance, the sky red with flames and swirling clouds of smoke. Unfortunately, the Grand Inquisitor (sung by Ievgen Orlov) was more a bumbling simpleton than the personification of the corrosive power of religious zealotry.

Maurizio Balò’s sets were stark and monumental, consisting mainly of large white marble walls or other stage elements, which at times parted to reveal menacing skies. The curtain rose at the beginning of the opera to reveal a large memorial wreath in front of Carlos V’s massive tomb. The tomb would open in the final moments of the opera to swallow up Don Carlo and save him from the clutches of Philip and the Grand Inquisitor. The Moorish Garden where Princess Eboli sings her Veil Song was rows of green hedges. The richly detailed costumes were of the period, and were all black except for the vestments of priest and bishops. Color was sparse and whatever bursts of it there were came as a relief to the eyes, with the gory exceptions of the blood of the heretics, and the self-inflicted scratches on Eboli’s face as she curses the beauty that has led to her downfall in ‘O don fatale’.

It took a while for the cast to warm up. The three-plus days between the first and this, the second, performance, did them no favors: there was an obvious lack of energy and concentration, evidenced by lapses in pitch and sagging phrases. Bass-baritone Michele Pertusi’s voice is on the light side for King Philip, lacking the cavernous low notes that one associates with the role. He cut an imposing figure however, and his Act IV soliloquy was effective. If the final low note did not reverberate with richness, it was nonetheless well placed and tapered off effectively. Singing in his hometown, he was clearly the audience’s favorite.

José Bros likewise does not have the dramatic heft to his voice that one associates with Don Carlo, but it is clear and resonant and carried easily through the house. The same holds true for baritone Vladimir Stoyanov. Their great duet, ‘Dio, che nell’alma infondere’, was stirring, with their voices blending perfectly. Whenever the melody was sung or heard in the orchestra, it seemed to invigorate them before your eyes.

Serena Farnocchia is a lovely singer whose artistry I have enjoyed on prior occasions, but again her voice is on the light side for the role of Elisabetta di Valois. As always, she gave a polished, carefully sculpted performance but appeared to tire by the final act, nonetheless singing a moving ‘Tu che le vanità’. Which leads us to the Princess Eboli of Marianne Cornetti, a true Verdi mezzo soprano with rich low notes and a blazing top. Her dramatic intensity was on display throughout, but especially as a spurned lover in the trio with Don Carlo and Rodrigo, and full of remorse over her betrayal of Elisabetta later in the opera. In Eboli’s great aria, ‘O don fatale’, Cornetti just poured out the sound. When she was singing alone on stage, Oren was free to turn up the volume and dramatic intensity a notch or two.