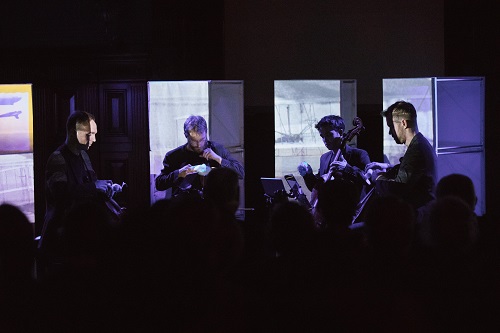 The 30 October matinee in the wood-paneled confines of Park Avenue Armory’s Board of Officers Room wasn’t just the world premiere of an ambitious new work by composer Roger Reynolds. It was the first New York appearance by the new-by-half JACK Quartet, which over the summer had announced the departure of violinist Ari Streisfeld and cellist Kevin McFarland.

The 80-minute FLiGHT began in darkness, with the players behind a barricade of large, boxlike cubes with some sides open. As the group played flower pots and battery-powered fans, five prerecorded actors described the natural function of the wing, and flying upward to the gods, quoting Socrates, Virgil, Ovid and others. At the same time, the texts were projected onto a large screen behind them, while images of birds and trees were shown on the boxes.

Over time, the musicians began moving the boxes to the back of the stage, stacking them carefully and revealing their instruments, which were waiting patiently. The prerecorded sounds dissipated, replaced by carefully measured fragments, with new violinist Austin Wulliman demonstrating an exquisite tone. (Cellist Jay Campbell would later reveal his chops during a solo passage.) The lines slowly filled the space—as if slowly inflating a whole—and with theatricality curtailed for the moment, they invoked lush abstractions.

The quartet repeated this cycle again and again, moving boxes and sitting down again to play. When they were at their instruments, dissonances dripped like butter, like the sometimes chaotic-but-purposeful design of the tree branches depicted in some of the opening images, only to slip into voicings as rich as a Brahms quartet. But with all the layers of imagery, video and text (Shelley, Franklin, Ralph Ellison, the Wright brothers, Freud, and Amelia Earheart), the music at times seemed incidental.

Rather than integrating his conceptual framework, Reynolds dropped background information in like clips from a PBS documentary. And while in this hyperlinked world, some in the audience were likely engaged by the back-and-forth, others (at least this reporter) might have appreciated a performance half the length, coupled with an advance reading assignment. Many in the audience, attending one of the warmest string quartets in town, were no doubt relieved, even elated, by this new JACK swing, even if the change came with distractions. Violinist Christopher Otto, violist John Pickford Richards and their new cohorts took their job seriously and succeeded in creating an atmosphere of expectation. But being led to wonder what will happen next is never as satisfying as wondering what is happening now.