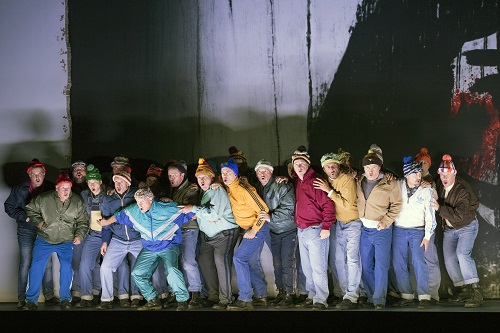 Sung in Italian, with English and Welsh titles.

A theme for each season was a concept brought to WNO by supremo David Pountney as one of his earliest policy decisions The theme for this 2016 Autumn season, the seventieth year of the company’s existence, was intended to take in reference to the four hundredth anniversary of the death of William Shakespeare, Britain’s non-pareil play wright. There are plenty of operas to choose from in the repertoire, particularly from the nineteenth century including the three by Verdi, the earliest of which, Macbeth, was included. Apart from that Macbeth WNO ignored the Shakespeare inspired masterpieces of Bellini and Donizetti, perhaps feeling they had recently done justice to the belcantist composers, and ended up with two works from the twenty first century of utterly contrasting musical style. The two works, one originating in the music theatre and premiered in 1946 the other, whilst being written in the second half of the twentieth century did not receive its stage premiere until 2013.

In 1846, Verdi was engaged to compose a new opera for Antonio Lanari, the impresario at Mantua. However, the contract was reassigned, by mutual agreement, to Antonio’s father, Alessandro, himself an important impresario and manager and director of Florence’s Pergola Theatre. The birthplace of the Renaissance, Florence deemed itself the intellectual capital of Italy, hence this was a prestigious commission for the 33-year-old Verdi, who had already proved himself in Milan, Venice, Rome, and Naples. Florence had recently seen the Italian premieres of two foreign operas, Weber’s Der Freischütz and Meyerbeer’s Robert le Diable, both of which featured plots involving diabolical forces. Verdi had two possible subjects in mind: the drama Die Ahnfrau by the Austrian poet and playwright Franz Grillparzer, which demanded a very strong tenor, and Shakespeare’s Macbeth, which demanded a very strong baritone. Since Lanari’s company could provide only the latter, in the considerable presence of Varesi who would later create Rigoletto, Verdi chose Macbeth and the work was premiered on March 14th 1847, it was the composer’s tenth opera.

The subject of Macbeth was a bold choice for Verdi. Shakespeare’s play had not yet been staged in Italy, though it had been translated. With Florence also the centre of liberal thought Verdi was able to treat scenes of the supernatural, interference in political events, even regicide and political tyranny, which the censors elsewhere in Italy would never have permitted. When Macbeth was staged in Rome, the supernatural elements were excised and the witches became fortune-telling gypsies. In Naples and Palermo, it was not King Duncan who was murdered, but merely his head-of-staff; and in Austrian-occupied Milan, the chorus patria oppressa (oppressed fatherland), of the exiles’ chorus became patria amata, beloved fatherland, and the phrase vil corona, (despicable crown), was removed. I preface my review with these comments, as my colleague in his review of this WNO staging was somewhat critical of Verdi (see review), feeling, as a Shakespeare scholar, that the opera did not do the play justice. I would argue that Verdi, with his use of a wide variety of musical means, creates appropriate mood and setting that does justice to the plot as exemplified by the diversity of his musical moods for the witches, Lady Macbeth’s sleepwalking scene and Macbeth’s own solo’s of self doubt. Add the supreme chorus of Act 4 and one can claim this to be an early masterpiece of the man who came to be called The Glory of Italy, whilst also accepting that his last two operas, Otello and Falstaff, composed over forty years later, really do unequalled justice to Shakespeare.

The original composition and staging of Macbeth in Florence was not the end of the story of the work’s composition. In the winter of 1863-1864, eighteen years after the Florence premiere, Verdi’s Paris representative, Léon Escudier, informed the composer that Paris’s Théâtre Lyrique had enquired if he would write ballet music for insertion into his score of Macbeth for performance at the theatre. Verdi’s response was more than Escudier could have hoped for, indicating that the composer wished to undertake a radical revision of the opera he had written eighteen years before. Verdi’s proposals for the revised Macbeth included new arias for Lady Macbeth in Act 2 with the conventional two verse Triofonai securo being replaced by the extraordinary monologue-aria La Luce langue, its chromatics in his later style. He made substantial alterations to the Act 3 with a duet for Macbeth and Lady Macbeth as well as an adding the ballet. In act four, Verdi rewrote the opening chorus Patria oppressa, a wonderful study in advanced choral sonorities, added the thrilling battle scene and replaced Macbeth’s death scene with the finale inno de Victoria where Macduff reports killing Macbeth to great rejoicing. In several other places, the original music was significantly tightened or retouched. A conflation of the two versions, albeit mainly the second, are presented in this performance including Macbeth’s death scene as he is killed by the man who was not born of woman, as predicted by the witches, but torn from his mother’s womb as he tells Macbeth as the two fight.

This production was seen in Ireland two years ago. The set is a basic shoebox shape with doors for occasional use. Costumes are a mishmash of historical periods and dress style, yes there are kilts being worn albeit rarely, but then there are the totally inappropriate costumes for the witches, some looking like they are dressed for bed in short pink nighties whilst Banquo’s assassins with their woolly bobble hats look like football louts There is a complete failure of the costumes to complement the atmosphere of the various scenes. An example is the procession of kings which is banal at best. I fondly remember the eerie atmosphere for the scene in the 1972 Glyndebourne production caught on DVD (see review) and which is completely lacking here as young boys process in what look like bandsman uniforms across the stage.

Much could be forgiven if the singing had been good. New was Miriam Murphy, replacing the admired Mary Elizabeth Williams as Lady Macbeth, over promoted from Lady-in-waiting in earlier performances I felt! She sang the notes without much characterization and did not aid her overall interpretation by her poorly acted assumption, merely seeming to float around the stage in a voluminous costume covering her more than ample figure. In the eponymous role, Spaniard Luis Cansino sang with some beauty of tone without convincing me he is a genuine Verdi baritone capable of bringing incisive characterization to any of the great roles the composer wrote for his voice type. The two featured tenors, Bruce Sledge as Macduff and Simon Crosby Buttle as Malcolm were adequate vocally. As Banquo, Miklós Sebestyén sang his aria with some degree of sonority. Thankfully the renowned WNO chorus was in good form for the scene in Act 4 chorus in particular.

On the rostrum Andriy Yurkevych did not seem to have a natural feel for the Verdi idiom; however he modulated the climaxes well and gave the chorus their head in the famous Act 4 chorus of exiles.