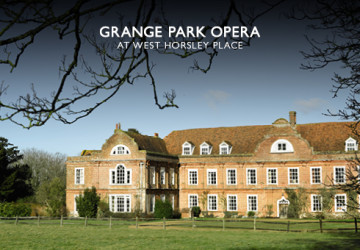 On 8 June 2017, the curtain will rise  on a  brand  new  horseshoe  shaped  opera  house  –  the first in the UK in decades. Grange Park Opera, one of Europe’s leading opera festivals, will open The Theatre in the Woods – and the 2017 season – at West Horsley Place, a 350-acre estate in Surrey, inherited in 2014 by author Bamber Gascoigne from his aunt, the Duchess of Roxburghe.

The opening night will be Puccini’s Tosca, with Joseph Calleja, the superstar tenor from Malta, in the lead role of Cavaradossi. The festival – which runs from 8 June to 15 July – also presents an evening with Sir Bryn Terfel and performances of Die Walküre (Wagner) and Jenufa (Janáček).

Wasfi Kani, the founder and CEO of Grange Park Opera said, “The opportunities offered by West Horsley Place are exceptional: its beauty and glamour, its location just 23 miles from London. Most exceptional, however, is Bamber and Christina Gascoigne’s generous act of philanthropy: giving away their inheritance for the wider public good.”

Bamber Gascoigne, the owner of West Horsley Place, said, “I have had two very great surprises in the past 18 months. The first was the unexpected news that I had been left, by a 99 –year-old aunt, Mary Roxburghe, a beautiful house in the country.

The other great surprise was provided by Grange Park Opera, they described their proposal and asked Christina and me if this might be acceptable. It didn’t take us long to say ‘Yes, indeed’. It isn’t every day that you are invited to have an opera house in your garden”.

“Singing with Grange Park Opera is life-affirming. These are people who want to bring a new generation to opera on and off the stage. I will be joining them on their journey.” Sir Bryn Terfel

In less than two decades, Grange Park Opera has established itself as one of Europe’s leading opera festivals. The 2015 festival saw world superstar Bryn Terfel take the lead role in Fiddler on the Roof, which was seen at the festival by 5,000+, critics heaped praise on the 2016 productions. Not without reason has it become known in the opera world as ‘a small jewel with big performances’.