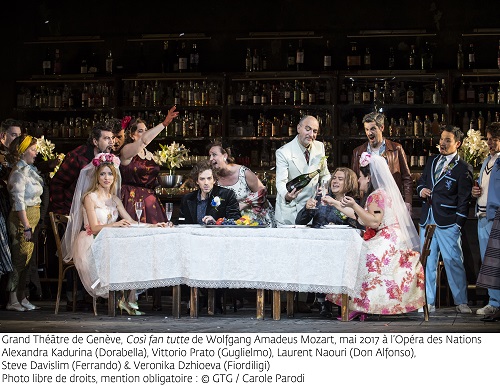 One of the challenges when reviewing operatic productions deciding where to start: with the musical components or the dramatic ones. Mozart’s works are theatrical by nature. His music, be it instrumental or for the stage, is essentially theatrical. According to this principle, one should consider the work of the producer first and begin with his contribution.

This is David Bösch’s second production in Geneva. As was the case last year with the successful staging of Handel’s Alcina, the sets were modern. We are in 1950’s Italy. Don Alfonso runs a bar where nearly all of the action takes place. Throughout the entire opera, Bösch finds many fresh touches to enlighten the work. I do not want to spoil things by giving too much away, but cannot resist saying how genuinely funny it was to see the ‘Bella vita militar’ chorus sung to the frightened Fiordiligi and Dorabella by pregnant women and crippled men in army uniforms, or that Guglielmo’s proof of victory over Dorabella was not limited to heart-shaped jewelry and involved something more personal…

Bösch did full justice to the comic side of the opera and was very careful to constantly illustrate both the music and the text. There was a sense of energy on stage and the singers were enjoying themselves, which was entertaining for the audience. It is actually a good sign when some of the singers cannot resist laughing, which is what happened at the end of Act I. The relatively small Théâtre des Nations enabled us to admire the director’s skills in Personenregie.

There is however a little ‘but’. Così is an ambiguous work, at best pessimistic and at worst misogynist. Bösch realizes it and there is no magic reconciliation of the couples at the end. Having Guglielmo on stage to witness the betrayal of Fiordiligi after bragging to Ferrando was also a nice touch… but on the whole, the production treated the work as a comic opera only and lacked depth.

Bösch struck a better balance with his Munich production of Die Meistersinger under Petrenko. The same gifts of characterization and content were present, but Bösch is so at ease with comedy that while he knew he also had to illustrate the darker parts of the work, perhaps he could not find material to highlight it. Make no mistake, even if a little something is missing, this is still a lively imaginative production, masterfully executed.

Even if the cast were still getting their bearings on opening night, the performance was a promising one. The director of the opera house, Tobias Richter, came on stage at the beginning to let us know that Steve Davislim was suffering from an allergy. The young tenor has nice colours in his voice but unfortunately his high notes were affected. Monica Bacelli and Laurent Naouri were very good with words and made their experience tell. Alexandra Kadurina was uneven, perhaps best when singing alone but somewhat hardened in tone during the ensembles. Veronika Dzhioeva’s range and colour as Fiordiligi were impressive. The Ossetian soprano sings Aida and Elisabeth at the Mariinsky. Here we had her singing Mozart in a small theater. No need for her to force, and she nailed the dramatic -but devilishly difficult – arias Mozart wrote for Fiordiligi.

In the pit, Hartmut Haenchen asked his strings for a certain restraint in vibrato, which was sometimes hard and lacking a certain silkiness. The woodwinds were much stronger and satisfying. Haenchen’s reading was classical and balanced. The ensemble was strong and secure and there were actually very few of the usual little glitches that take place during a premiere. Xavier Dami at the harpsichord, and Jakob Clasen’s cello made much of the recitatives.

With this production, the Grand Théâtre has a winner. Audience and musicians alike left the theatre happy and full of energy. We now look forward to next year, when David Bösch will be back to stage Don Giovanni.