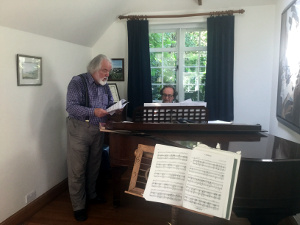 Counterpoise is an ensemble of some of the most sought-after instrumentalists in the UK, founded with the aim of crossing genres, exploring the relationship between music, text and visuals, and seeking to develop aspects of narrative and other extra-musical influences.

Our latest project, Kokoschka’s Doll, featuring Sir John Tomlinson, Rozanna Madylus and Counterpoise, will be performed at a number of venues in 2017 and 2018.

For Alma Mahler, the painter Oskar Kokoschka (1886–1980) was just one of a string of eminent lovers, but for Kokoschka his brief affair with the widow of Mahler was to haunt the rest of his life. Shortly after the liaison ended, in 1914, Kokoschka commissioned a life-size doll of Alma, which he took to concerts and other public events, finally destroying it at a party to which all his friends were invited. Alma is featured in many of his paintings, not least the famous double portrait of the couple known as The Bride of the Wind.

The text of this new work, commissioned by Counterpoise, for singer/narrator and ensemble, is by John Casken and Barry Millington, based on poetic and epistolary texts of Kokoschka. It describes the affair as seen through the eyes of Kokoschka as a older man, evoking the passions unleashed by the affair, against the background of the physical and psychological traumas suffered by Kokoschka in the First World War. The score weaves the texts into a musical fabric that references fin-de-siècle Vienna (including the music of Wagner and Alma Mahler) while being of our own time.

Text by John Casken and Barry Millington, based on letters and writings of Oskar Kokoschka

The Art of Love: Alma Mahler’s Life and Music

Kokoschka’s Doll, which lasts just over half an hour, will be complemented by a sequence of music and text, featuring the work of Gustav and Alma Mahler, Wagner and Zemlinsky, under the title The Art of Love: Alma Mahler’s Life and Music. The latter includes songs by both Mahlers arranged for Counterpoise by David Matthews, as well as a Webern Trio movement (unpublished and as yet unperformed in the UK) for Counterpoise forces, with continuation by Matthews. The singer will adopt the persona of Alma and deliver a text (by Barry Millington) telling the story of her affairs with Zemlinsky, Mahler and Kokoschka. 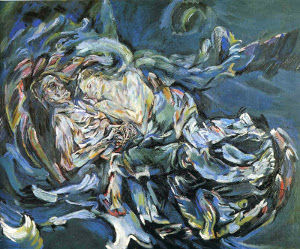 Kokoschka’s painting The Bride of the Wind (also known as The Tempest), an allegorical picture in which the artist is depicted lying beside Alma Mahler.