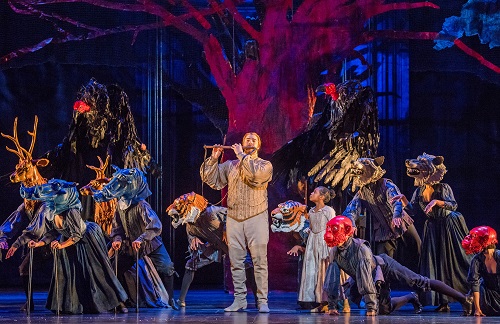 United Kingdom Mozart, Die Zauberflöte: Soloists; Chorus and Orchestra of the Royal Opera House, Covent Garden / Julia Jones (conductor). Royal Opera House, Covent Garden, 12.9.2017. (CC)
Cast:
Tamino – Mauro Peter
Pamina – Siobhan Stagg
Papageno – Roderick Williams
Papagena – Christina Gansch
Queen of the Night – Sabine Devieilhe
Monostatos – Peter Bronder
Sarastro – Mika Kares
First Lady – Rebecca Evans
Second Lady – Angela Simkin
Third Lady – Susan Platts
Speaker – Darren Jeffery
First Priest – Harry Nicoll
Second Priest – Donald Maxwell
First Armoured Man – Thomas Atkins
Second Armoured Man – Simon Shibambu
First Boy – James Fernandes
Second Boy – Oliver Simpson
Third Boy – Jayden Tejuoso
Production:
Sir David McVicar – Director
Thomas Guthrie – Revival Director
John Macfarlane – Designs
Paule Constable – Lighting
Angelo Smimmo – Revival Movement Director
I reviewed this production, actually under the baton of the same conductor, Julia Jones, in 2013 (review); there, I spent quite some time considering David McVicar’s production and, in the final event, finding it rather lacklustre. Not much has changed in revival director Thomas Guthrie’s 2017 presentation, and so the production remains somewhat underwhelming. The serpent surely borrowed from Chinatown remains a nice idea that does not quite live up to its promise; the magic flying bicycle of the Three Boys works rather well; but a rather wobbly, unsmooth opening of a door stood out in a staging characterised by its slickness. The trials, in comparison with the visual feast of Simon McBurney’s ENO Flute recently, were something of a let down.
This is the sixth outing for McVicar’s production since it opened in 2003. McVicar’s assistant in that first year was one Lee Blakeley, who died recently (and young: his dates are 1971-2017), and it was to Blakeley that this first performance of the 2017 run was dedicated.
First night-itis affected ensemble on several occasions with orchestra and soloists diverging. Jones’ conducting still lacks that final finesse and even involvement that I found problematical in 2013; neither did occasional felicities of detail compensate for the lack of an overarching conception of this masterpiece. Much of the delight of the performance was in fact down to several of the soloists.
This production seems to have been blessed with notable Papaganos of late: Simon Keenlyside was remarkably athletic in 2013; Roderick Williams almost as much so in 2017 but adding his own sauce to the role. Williams’ Papageno had real depth and a dramatic trajectory of his own, a counterbalance to Tamino rather than mere comedic relief yet still with bags of character (“Der Vogelfänger bin ich ja” being a case in point). His Papagena was the wonderful Christina Gansch – interestingly, she has taken the role of Pamina in her home base of the Hamburg State Opera, of which she is a member of the ensemble. She had a ball, costumed up to the hilt.
Of the primary pair, Tamino and Pamina, this was a splendid match. Mauro Peter, making his Royal Opera debut, is a member of Zürich Opera, where he has taken his fair share of Mozart roles (Don Ottavio, Ferrando, Tamino and Alessandro Il re pastore) – he has also recently taken on Belmonte Entführung for La Scala. Fresh-voiced and nicely lyrical, this was a lovely assumption, topped however by his Pamina, the astonishing young and beautiful Australian soprano Siobhan Stagg (a member of the Deutsche Oper Berlin). She made her French debut as Pamina with Les Talens lyriques under Christophe Rousset, and her familiarity with the part shines through in the care she takes on shading every phrase; and yet Stagg’s whole performance was shot through with the freshness of youth. Eminently believable dramatically, she has all the style and grace that Mozart demands, her “Ach, ich fühls” a real highpoint of the evening.
Stagg was nearly, but not quite, outshone by the Queen of the Night, Sabine Devieilhe, herself every inch the equal of her predecessor in the role in 2013, Albina Shagimuratova. In Devieilhe’s case, it was the variety of colour and dynamic she brought to her role as well as the sheer virtuosity that was so impressive. Another Royal Opera debutante, one hopes we will see and hear her again sooner rather than later.
Peter Bronder brought a delicious sense of malevolence to Monostatos. Mika Kares was a superbly present Sarastro, his voice authoritative; Darren Jeffery, who replaced the originally advertised Sebastian Holecek as the Speaker of the Temple, was imposing. Some familiar and welcome names among the smaller parts (Rebecca Evans, Donald Maxwell) warmed the heart while the splendid trio of boys excelled, impeccably rehearsed and beautifully blended.
This remains a broadly satisfying, if not extraordinary, musical experience. Mozart’s Die Zauberflöte remains an elusive masterwork, its demands of balancing depth and frivolity pretty much guaranteeing that any one production will not please everyone. Worth going, though, for the very special Pamina of Siobhan Stagg and the stunning Queen of the Night of Sabine Devieilhe.
Colin Clarke
The Royal Opera’s Die Zauberflöte (with this cast) will be relayed live to cinemas in the UK and throughout the world on Wednesday 20 September. For more information click here.