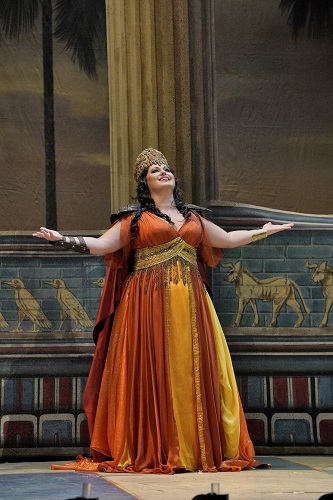 Last night’s opening performance of Verdi’s Nabucco at LA Opera was a firestorm of brilliant music making and penetrating theatrics. The stage was alive with the political turmoil of ancient Jerusalem, while simultaneously incorporating the political climate of Verdi’s nineteenth-century Italy and, at the end of the performance, after the curtain calls and ecstatic applause, referring to present-day struggles in a surprise finale.

When Nabucco premiered at La Scala in 1842, northern Italy was again dominated by a foreign power – Austria in this case. A collection of city-states, Italy had yet to be unified by the Risorgimento and proved easy prey to foreign intervention. The opera, Verdi’s third, revolves around the oppression of the ancient Hebrews by King Nabucco (Nebuchadnezzar) of Assyria. It was relevant to the contemporary political climate and became a rallying cry for Verdi’s compatriots – so much so that to this day his famous chorus, ‘Va, pensiero’, has the near status of a national anthem in Italy.

Here Thaddeus Strassberger has created a play within a play which reveals the Austrian intruders in attendance at a nineteenth-century production of Nabucco. Three tiers of opera boxes lined one side of the stage’s proscenium, where the Austrian aristocracy and soldiers gathered to watch a performance. Though their parade-like entrance to the overture was somewhat overstated and distracting, their inclusion, once they settled into their boxes, added a political context to the opera that proved both intelligently conceived and emotionally compelling.

Within this ‘opera house’, Strassberger created sets reminiscent of classic opera posters of the period – extravagantly painted two-dimensional columns, gates, statues and vegetation that created the illusion of three-dimensional perspective and placed the set firmly in the world of grand opera. The costumes had the romantic feel of nineteenth-century biblical illustration, and the superb lighting gave it all a sultry glow.

Fictional characters caught in a love triangle are added to the historical events: Ismaele, an Israelite military leader; his love, Fenena, Nabucco’s younger daughter, who is now a hostage of the Israelites; and Nabucco’s elder daughter, Abigaille, who is also in love with Ismaele. The spurned Abigaille is bent on seizing power and destroying everyone in her path, including her own father.

Liudmyla Monastyrska in the punishing role of Abigaille created a perfect storm of jealousy, rage and narcissism. She has the kind of full-throttle dramatic soprano that thrills the listener, but also the ability to softly modulate her voice, as in her closing aria of penance.

Matching her in power was bass Morris Robinson, charismatic as Zaccaria, chief priest of the Hebrews. With a voice equivalent to his immense stature, his sumptuous tone and physical presence lent gravitas to his pivotal role as the leader of his people.

That marvel of ageless dynamism, Plácido Domingo, singing the baritone role of Nabucco, elicited sympathy as the warrior king who descends into madness. He is still an incomparable musician and sings with vibrant lyricism. In his heartbreaking aria, ‘Dio di Giuda’, he reminded us, as with every performance, what a consummate actor he is.

Mezzo Nancy Fabiola Herrera and tenor Mario Chang were a well-matched pair of lovers, singing with passionate intensity in their duets, trios and ensembles. In their supporting roles, Liv Redpath, Joshua Wheeker and Gabriel Vamvulescu were strong.

While the soloists and orchestra were dazzling, the performance was a perfect example of how the chorus itself can become a principal in voice and action. As Israelites and Assyrians, the LA Opera Chorus under Grant Gershon did a remarkable job, whether commanding the stage en masse or joining in the ensemble singing of the principals. Conductor James Conlon’s contribution cannot be overstated, and the chorus, orchestra and soloists together created an emotional charge that ignited the audience.

The ‘surprise’ (spoiler alert) came, as I mentioned, after the curtain call. With Conlon and the creative team onstage, the audience became participants in the production. Liv Redpath began singing ‘Va, pensiero’ as the Italian was projected in supertitles to the audience. The singers on stage joined her, both those in biblical costumes and in the nineteenth-century garb of opera audience, soldiers and stage crew. In turn, we in the audience added our voices, and there was no mistaking the reference to present day American politics with the country turned inside out. With most of us united in a patriotic call to liberty, this was a night at the opera to remember.