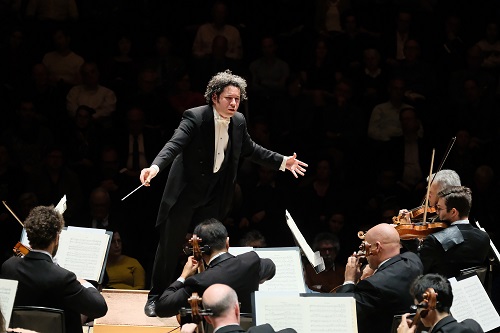 With playing as slick as Brylcreem, the Los Angeles Philharmonic exudes professionalism and excellence. This concert was the start of a three-day residency that reflects ever-deepening links between the LAPO and the Barbican. On May 3, a concert of contemporary music from the ‘Los Angeles Philharmonic Green Umbrella series’ is scheduled, while on May 4 an open rehearsal precedes a performance of Bernstein’s Chichester Psalms and Beethoven’s Ninth Symphony.

Esa-Pekka Salonen’s Pollux for a very large orchestra is a co-commission between the Barbican and the LAPO, receiving its European premiere here; the linked piece Castor will follow on in due course. Of course, Salonen himself has played a major part in the orchestra’s history. He injects a deliberately ritualistic undertone to his piece (inspired in part, he tells us, by a rhythm of a post-grunge band overheard by chance in a Parisian restaurant). In musico-pictorial terms, the music conjures up cloud-like elements (the realm of the demi-gods) while chorale-like passages invoke Orpheus. This is the slow part of the pair; Castor will be more outgoing. The opening could almost be described as post-Sibelian-frozen; a subsequent woodwind entry brings great beauty, while other passages seem like Debussy stretched forwards in time. A long, super-high oboe solo was perfectly delivered. It is a fascinating score, revealing much about Salonen’s expert ear. Antiphonal violins allowed for extra textural definition.

It was worth bearing in mind that Salonen’s piece is for large orchestra, as even more players came on for Varèse’s huge exploration of dissonance, Amériques. This was the composer’s first major work since leaving Europe; it is as if the feeling of infinite possibility exuded from the new terrain was reflected in his music. The score calls for a minimum of nine percussionists, one of whom plays the siren – here a remarkably smooth-sounding specimen. Everything about the playing here, and in the Salonen, spoke of ultra-careful preparation. We were promised in the pre-concert reception that the concert would be loud, and the Varèse certainly was, if not uncomfortably so. The work is hyper-gestural, and Dudamel gave an unapologetically uncompromising reading; the orchestra was, technically speaking, spectacular. How wonderful to see a (nearly) full hall for this music, too.

Shostakovich’s Fifth Symphony is far more familiar terrain. Dudamel conducted from memory, and it was again the discipline of the delivery that shone through. If the long-breathed first violin melody in the opening Moderato was not quite blanched, there was much beauty to the ongoing tread of the soft accompaniment. It was interesting that the notorious low horn statement with staccato low piano in the Allegro non troppo had the horns and piano on opposite sides of the stage, presenting real ensemble challenges; they were together – just.

The keyword here, as throughout, was clarity. One could hear Shostakovich’s layering in the climaxes of the first movement perfectly; it was only later that one realised that there had not been one true pianissimo all evening so far. The dance of death that is the second movement held both bold brass and superb violin solos from Principal Concertmaster Martin Chalifour.

Orchestra placement was again noteworthy in the Largo, as the antiphonally-placed second violins were in counterpoint with the left-placed double-basses. It worked brilliantly; as did the flute and harp duet. The finale was in complete contrast, a blaze of bright light. And relentlessly so: Shostakovich does give the odd opportunity for mystery to enter the equation, an invitation eschewed in the present instance.

The encore was Wagner’s Isoldes Verklärung (more commonly called the “Liebestod”) from Tristan und Isolde, obviously but sadly missing the voice. It was a generous addition to the programme, anyway, and certainly full of lush beauty.