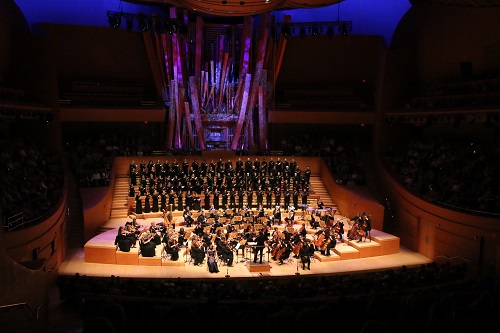 Johannes Brahms’ cathedral-sized Lutheran ‘Mass’, Ein Deutsches Requiem, was the first hugely proportioned composition to bring him major fame and prestige beyond the confines of Vienna and remains one of the artistic peaks in his prodigious oeuvre. It’s a large work in all senses and, most likely because of that, it is seldom performed.

Yet Ein Deutsches Requiem occupies a place in the liturgical repertoire at the highest level. Any performance of this masterpiece is a notable event, and one with The Los Angeles Master Chorale should turn heads and ears. Director Grant Gershon also led the Master Chorale Orchestra, with Jeanine De Bique and Justin Hopkins performing the vocal solos.

There are seven separate movements of the German Requiem and Brahms, after a few years of reworking it, eventually formulated a balanced ideal for its pure musical expression. For example, the opening passage, with its expression of comfort, is followed by the deathly serious second movement and a relentless march toward ‘withering grass’ and ‘decaying flowers’.

Grant Gershon has proven to be a sensitive and nuanced conductor, not to mention his grand gestures, and the Master Chorale repeatedly demonstrates its pliability –  whispering pianissimos and terrifying fortes – all in the service of the score at hand. There were no flaws in the Master Chorale’s accounting of this work: the sweetness and tentativeness of the first section, ‘Selig sind, die da Leid tragen’ (‘Blessed are they that mourn’), stood in sharp contrast to the musical and dramatic forward motion of ‘Denn alles Fleisch es ist wie Gras’ (‘Behold, all flesh is as the grass’). Gershon’s ability to calibrate emotions to words is only one of his many qualities. When the dead are lifted up in the sixth section, and the famous question posed, ‘Tod, wo is dein Stachel?’ (‘O Death, where is thy sting?’), the vocal power of the chorus was unleashed in the way that only a 100-voice group can let loose.

This is dense, centered music from first to last note. Brahms worked and reworked its final version for three years, lengthening this and cutting that. The end product is as ardent and muscular as any choral piece in the repertory. A friend once called it ‘buff’, and I’m hard-pressed to find a better word.

The two soloists were professional in the best way: palpably responding to the music while maintaining poise and dignity. They possessed a strong dramatic presence, while letting the music largely speak for itself. Jeanine De Bique brought sweetness and empathy to ‘Ihr habt nun Traurigkeit’, and Justin Hopkins’ emotional range alternated between dramatic and coolly restrained.

If there were any problems in this moving, cathartic experience, it was in the equipoise between the Chorale and orchestra. The instrumentalists seemed under-rehearsed. At times the balance was, well, imbalanced, and the Master Chorale was often overpowering. I did a quick count: there were exactly 100 singers on risers above the orchestra, about 61 assorted orchestral instrumentalists, two vocal soloists and one conductor. It doesn’t require a Fibonacci to do the numbers or balance the ledger.

The concert opened with two brief pieces: Caroline Shaw’s ‘Fly Away I’ and David Lang’s ‘where you go’. The New York-based Shaw, youngest winner of a Pulitzer Prize for Music, offered a telling sample of her bright and absorbing style, one rooted in diatonic harmony but not stuck in its tropes. The result was an open, accessible and imaginative five or six minutes of ingenious surprises. On the other hand, David Lang’s ‘where you go’ focused on the play of sound and silence. It was immediately identifiable as the style of Lang, which I’ve termed ‘enigmatism’, and it left me enthralled. How wonderful to begin a concert that is centered on a major Brahms score with related but highly differing accounts of many of the themes illuminated by the Deutsche Requiem: solace and bonding, contemplation and contact. If I had any objection to the performances of these two pieces, it was the deployment of that massive chorus in the performance of the most intimate music. Still, they pulled it off with style and panache.

Before the concert began, Grant Gershon, speaking to the audience from the podium, suggested that they regard this concert as a ‘singular’ event, and withhold applause until its conclusion. (He also suggested that there was no reason to suspend applause at the concert’s end; indeed, pour it on!). While it was difficult not to applaud specific sections of the Requiem, the conductor’s request was 99% respected by the audience, and the final release of genuine appreciation was wholly satisfying. I say ‘Hurrah’ for the director’s gentle and appropriate request, and ‘Hurrah’ for the audience’s compliance. By withholding the applause, it became a rewarding experience for all involved. I hope that this edict becomes the law of the land, or at least the expected behavior of concertgoers from coast to coast.