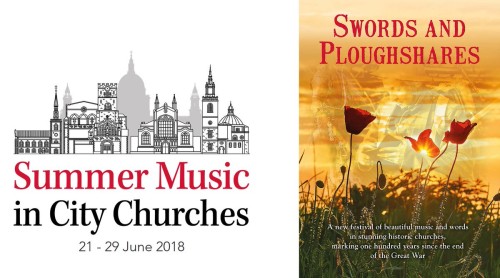 The City of London Festival has been missed since its demise was announced in 2016, One concert in particular will remain with me forever: the last time I heard Sir Colin Davis conduct: Berlioz’s Grande messe des morts in St Paul’s Cathedral. There were many smaller events, though, many of them free, most of them dotted around various of the City’s churches. Let us welcome, then, a new festival, Summer Music in City Churches, which seeks to recapture some of that essence and opportunity. In its opening year, a hundred years since the end of the Great War, it has decided to focus on ‘different aspects of … [that] era, and some later responses to war and peace’. This, the opening concert, was entitled ‘Storm and Refuge’; it offered in its first half works by English composers, followed by a later French requiem.

Far be it from me to speak in nationalist terms, but Elgar’s was certainly the finest of the music on offer here. (‘For balance’: the worst would also be English.) The City of London Choir under Hilary Davan Wetton seemed very much at home in two of his psalm settings for chorus and organ, as did organist Mark Williams. The first, Give unto the Lord, benefited from a performance both vigorous and variegated, its tricky corners unfailingly well navigated – occasional early issues of synchronisation notwithstanding. One could hear echoes of the composer’s great oratorios here, yet there was no doubting the singularity of his response to this particular text. Williams’s organ registration choices were apt, indeed telling, perhaps especially his use of reeds. Written in 1914 for St Paul’s, it was succeeded at the end of the first half by Great is the Lord, from two years earlier (Westminster Abbey). Again emphatically through-composed, Elgar’s response to the words proved clear, vivid, even joyous – both in work and performance. These settings are not easy to perform; they are very much worth the effort.

In between came two lesser works. Holst’s 1915 Nunc dimittis (Westminster Cathedral) is a curious piece. It opens intriguingly, in a very different – arguably more ‘modern’, even modernist – tonal language, before lapsing into something a little too close to English Renaissance pastiche. There are worse models than Byrd, of course, but it is difficult to understand how the whole might cohere. It received a full, rich-toned a cappella performance, though, very much in the tradition of Richard Terry’s celebrated Westminster Cathedral choir. As for Sir George Thalben-Ball’s Elegy, the less said the better. It doubtless worked in its plodding way as an organ improvisation; those wireless listeners reported to have called the BBC to ask him to write it down probably needed to get out more. The piece was played very well, though.

Maurice Duruflé’s Requiem probably works best in its version for organ and choir. The composer’s orchestral writing lacks interest and tends to distract rather than elucidate. From the opening of the Introit, what struck me here was how plainchant came more strongly still to the fore. There was a strong sense of building towards the light that will shine upon the souls of the dead, not unlike Fauré (an obvious comparison, yet surely not irrelevant). Climaxes in the ‘Domine Jesu Christe’ were especially well handled: ‘beautiful’ in a conventional sense, but this is hardly a work of avant-gardism. Quiet unease was nevertheless present too. Marta Fonatanals-Simmons’s solo in the ‘Pie Jesu’ (joined by solo cello) was, especially at the opening, sometimes painfully out of tune and weirdly ‘operatic’ in the vulgar sense: a pity. Chorister John Lee did a better, more self-effacing job with his solos, here and in Elgar. Cross-rhythms really told in the ‘Agnus Dei’, preparing the way for quiet consolation and certainty in the return of the ‘Requiem’ music in the following ‘Lux aeterna’. It was good to hear a ‘Libera me’ that did not drag, as it can, leading to an equally well shaped final ‘In paradisum’. If the setting is always more likely to appeal to conservative choral scholars than to a wider musical public, it will doubtless retain a place on the fringes of the repertoire for that reason – and not unreasonably so, when well performed as here.

For more about Summer Music in City Churches click here.