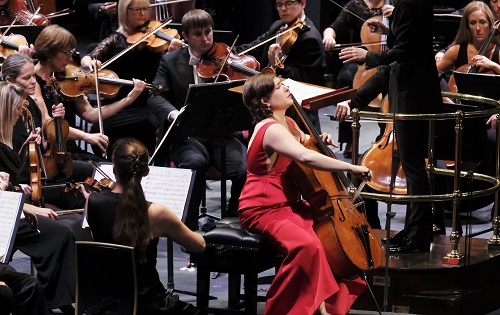 This was in many ways a brisk, even business-like, Prom, but that’s not to suggest it was without passion.  Conductor Karina Canellakis has a distinctly no-nonsense approach: she’s clear, crisp, and uses her left arm and hand judiciously.  It was evident that the BBC Symphony Orchestra knew what Cannellakis wanted and enjoyed delivering the goods.

The fortissimo whip-cracks which trigger Beethoven’s Coriolan Overture were veritable bullets – hard, steely, tense and electric.  The tempo was fast – perhaps a little too precipitous, for the momentousness of the silences in between the fortissimo jolts did not quite register – and the atmosphere was shifty and anxious.  And, after the agitated opening, the second subject was just as twitchy as Canellakis created a sense of moving onwards into ever more tumultuous waters.  The clarity of the orchestral textures was admirable – there was some terrific playing by the violas and cellos, who often seemed to be racing along on tip-toe – and there was contrast, too, in the occasional hints of warmth from the reedy woodwind.  Canellakis sustained the strong sense of intense purposefulness to the close, which was taut and sombre.

There was no hanging about, either, in Shostakovich’s First Cello Concerto, which soloist Alisa Weilerstein launched with fire and vigour.  The Allegretto was tense and fraught, energised by rhythmic frissons and occasional snarling rasps, with the pizzicatos of the orchestral cellos and double basses injecting a propulsive force.  There was a prevailing air of bitterness, despite the first horn’s beautifully mellow contribution, as Weilerstein’s cello seemed almost to attack the music, engaging fiercely in Shostakovich’s sardonic arguments.  Though when the solo line sank low, there was some relaxation in the intensity of the sound, any relief was short-lived, and the troubling restlessness dominated.

I felt that Weilerstein didn’t quite convey the espressivo quality of the second movement, Moderato, but if the sentiment was quite restrained, then there was an air of vulnerability, though the intensity of the soloist’s tone remained compelling.  And, the cellist brought forth small murmurs and nuances, that caught the ear.  The third movement cadenza was a soulful retreat: dry pizzicatos formed a percussive self-accompaniment, but Weilerstein drew a lovely grainy C-string tone from her instrument.  The technical challenges of the cadenza were made to seem effortless and propelled Weilerstein into a concluding Allegro con moto which was frenetic and sometimes seemed to push to the borders of human fore-bearing.  After such anxieties and extremes, the Sarabande from J.S. Bach’s Fourth Cello Suite in Eb offered some cleansing of the palette, Weilerstein emphasising the poise rather than the dance, and using Bach’s grace to gradually release the tension that Shostakovich’s concerto had wound up to near breaking-point.

After the interval, there were more apocalyptic energies in Andrew Normal’s Spiral.  Commissioned by the Berlin Philharmonic and Sir Simon Rattle, who had premiered the work six weeks earlier, this six-minute composition, in Norman’s words, ‘traces the transformation of a small number of instrumental gestures as they orbit each other in ever-contracting circles’.  Scored for large orchestra and requiring three percussionists to play an assortment of antique cymbals, temple blocks, cowbells, gongs and drums, Spiral plays with colours, sounds and pitches (six strings of the harp are tuned a quarter-tone flat).  There were bangs and clangs, slides and scrapes, as harmonies shifted enigmatically, the string players – divided into multiple parts – dragged their bows sul ponticello and uttered rasps of noise and air, and intermittent true tones emerged momentarily amid the vacillations.  But, as the spiral ‘unwound’ itself towards silence, I have to confess that I found it difficult to gain a sense of where we were heading or any feeling of conclusiveness when the work ‘arrived’ at its destination – the latter being described in Paul Griffiths’ programme note as an ‘inevitable implosion’ after the music has been ‘drawn ever round and inward by its own gravity’.

The ground was surer in Rachmaninov’s Symphonic Dances which concluded the programme.  Perhaps a little too ‘sure’, for Canellakis emphasised the alternate rhythmic bite and elegance of Rachmaninov’s dances – and cut a graceful figure on the podium – but neglected the symphonic darkness of the score.  There was much to admire: the warm full sound of the strings in the first dance, a superb solo from the alto saxophonist (strangely the musician was not named in the programme), some lucid woodwind hues, a terrifically polished and light-footed waltz, flashes of flair from the brass.  But, Canellakis didn’t make all the parts cohere and there were some episodes which lost momentum and shape.  Most importantly, I missed that note of pained wistfulness that should linger even after the heroic flourishes of the closing bars.