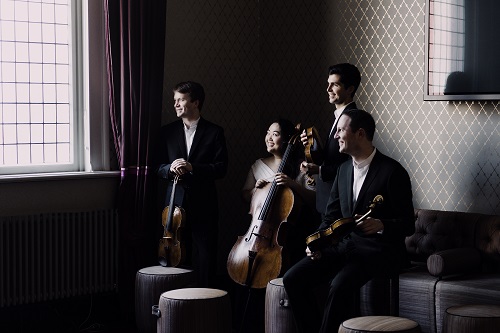 Now another ensemble has to be considered among this tightly squeezed field. Based in New York, the Calidore String Quartet are violinists Jeffrey Myers and Ryan Meehan, violist Jeremy Berry, and cellist Estelle Choi. After its founding in 2010, six years later the group won the inaugural $100,000 grand prize in the M-Prize International Chamber Music Competition (based in Ann Arbor, MI), the largest prize for chamber music in the world. And this past summer they made their debut at the BBC Proms.

This week the group released its fourth recording, Resilience (on Signum), and in scarcely an hour at SubCulture, they gave a taste of the new project to an enthusiastic audience. The title refers to the group’s thoughts on what it means to be resilient and ‘our purpose as musicians during this time of social upheaval.’ They began with a teaser, two movements of Prokofiev’s Second String Quartet, which showed the group’s assurance with striking contrasts. Alternately jaunty and savage, the effects included some perfectly executed squeaks.

From 2000, Osvaldo Golijov’s Tenebrae made a reverent interlude. The composer wrote it after two incidents close together: a visit to Israel (observing strife) and to New York’s Hayden Planetarium (observing the fragile size of the Earth). As in the Prokofiev, the foursome showed keen timbral variety, finding some opportunities for grinding textures among the passionate legatos.

To conclude came Mendelssohn’s sixth and final quartet, composed in sorrow after the death of his beloved sister, Fanny. But the result is anything but sad; ‘rage’ might be the overwhelming emotion — at least, in the Calidore’s hands. The first movement was notable for its fury and sheer speed, with no loss of precision, and the second was still rhythmically pointed but more graceful, with expert pizzicatos. The Adagio had the red-blooded sweep of a movie score, with somber echoes of the Golijov earlier. And the finale — at times vengeful — boasted some strategically placed trills among the storm.

The new album includes everything here (including the Prokofiev middle Adagio), plus Janáček’s first quartet, the ‘Kreutzer Sonata’. If the recording is comparable to what this admirable group displayed last week, the loud ovations after the concert were completely justified.