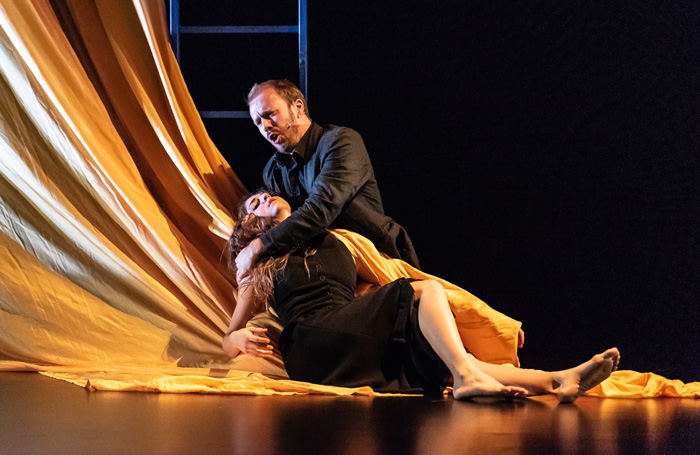 Pascal Dusapin’s hypnotic, elusive ‘dance-opera’ was premiered in Aix a decade ago. While the title is apt (there is dance and singing) there is perhaps also an implication that ‘dance-opera’ implies a softening of the drama of opera, and if so then it is entirely correct. This is soft-edged drama, often hyper-beautiful. Originally in Italian (the language of Monteverdi’s epoch-making opera), this was heard in a translation (no surtitles) by Amanda Holden.

The concept is fascinating. Composers have long been fascinated by the Orpheus myth, from Jacopo Peri’s pioneering Euridice, through Stefano Landi (La Morte d’Orfeo: see my review of the March 2018 performance in Amsterdam here) to the likes of Birtwistle (The Mask of Orpheus) via Rossi, Gluck, Offenbach, Krenek and on to Philip Glass. The present offering continues this line, leaving in its own wake more than a hint of greatness.

Pascal Dusapin is an uncompromising, powerful composer whose name is sadly better known on the Continent than it is here: a two-disc multimedia release on Naïve featuring his Sept Etudes for piano and his à quia (concerto for piano and orchestra) with Pierre-Laurent Aimard as soloist offers a fine introduction to his world.

Passion is one of ten staged works by Dusapin (none of the others have been staged in the UK). Two singers, Him and Her, provide the prime vocal aspect (the soprano part is particularly taxing). The Others (the dancers) provide abstracted movement and comment. The remaining ‘character’ is one that is never really explicitly part of the narrative, although hinted at by dancers’ bodies slithering on the stage: a snake. From Adam and Eve to the sacred status of snakes (‘nagas’) in Hindu mythology, the snake has threaded its way through our collective consciousness; in the Orpheus tale it takes the life of Eurydice. The story, as such, is told non-linearly and redresses the balance in the male-oriented versions of this myths many tellings; it is Eurydice who is the focus, as she comes to terms with her condition post-mortemly, a suggestion perhaps that there are stages of bereavement for those who pass to the Spirit world as well as for those who are left behind. Of course, there are two deaths of Eurydice (the physical one and finally the one when Orpheus looks behind him); she is, as Dusapin put it in the pre-concert event, ‘proactive in her own death’.

The experience is intense. There is no interval (it lasts about one hour 20 minutes) and no performers leave the performance space during that time. The dancers and music conspire to provide what Dusapin in his pre-concert interview effectively described as an interior dialogue around Eurydice. The stage setting is simple: a ladder, a curtain tied to look something like a sail and, later, a mobile light panel. The exploration is all done through sound, through dance and through stage setting. Dusapin does reference earlier times in the inclusion of a harpsichord (heard via the speakers), whose very sound takes us back to older worlds, but is basic language is effectively atemporal: out of time itself. The sound of an oud is another fascinating added ingredient to the mix.

One never felt regret at the absence of subtitles. Jennifer France negotiated the sometimes stratospherically high lines with seeming ease, Johnny Herford a strong-voiced Him. Vocal lines could be extremely long-breathed and lyrical, often at the very top end of the soprano range, and in France’s performance these took on the highest beauty. The dancers, too, were completely immersed in their parts, particularly perhaps the mesmeric movements of Nikita Goile, whose fluidity seemed to mirror Dusapin’s music perfectly. There is, of course, the London Sinfonietta rejoice in, and the performance standard under Geoffrey Paterson was impeccable. Interesting that Paterson did not enter the performance area with a round of applause, preferring instead to creep on, something very much in keeping with foregrounding the piece itself.

Co-Directors Michael McCarthy and Caroline Flynn (the latter with a history in dance) use the stage space perfectly, their ideas perfectly realised by designer Simon Banham; lighting (created and overseen by Joe Fletcher) creates an immersive experience in which time seems to cease to exist. One fervently hopes for a Dusapin awakening in the UK, although, as it was noted in the pre-concert event, there seems to be something of a chasm between the UK and mainland Europe when it comes to contemporary music; one that, one fears, may only get more entrenched in 2019. Dusapin’s piece reminds us that myth and music are central to the human experience, irrespective of locale.