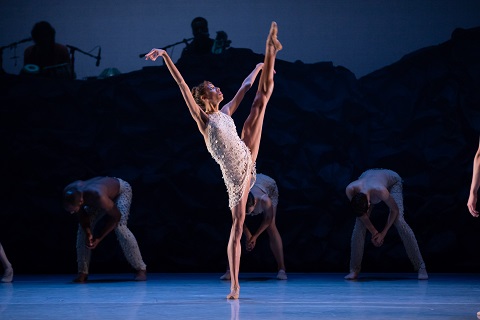 Alonzo King’s dancers can turn a pirouette into an ecstatic dervish spin, a plié into a prayer or a grand jeté into bird flight. They are remarkable for their ability to morph from Western classicism to Eastern dance traditions, and they often do both in one movement.

King has assembled a remarkable troupe of dancers – strong, graceful, expressive – to do battle with his particular brand of choreography.

Influences from Balanchine to Martha Graham were evident in Sutra, King’s most recent work, which melded splendid music by Indian composers Zakir Hussain and Sabir Khan with choreography that refused to settle into one particular form. Its elusiveness was its strength, creating an intriguing personal vision.

Strongest when keeping both traditions in precarious balance, the movements deflated in power when Western classicism was completely abandoned in favor of contemporary dance’s more predictable tropes – undulating torsos, jerking shoulders and bent elbows, for example.

But King understands how music and movement need to feel integral to one another. In Sutra, the steps sprang forth from the music achieving a mythic quality, a sense that music necessitates movement. At times there was a ritualistic atmosphere of tribal rites being performed, at other times inner thoughts and desires seemed projected outward. Human movement – an elegant extension, an arabesque – in a flash morphed into an animal-like deep knee bend. A développé turned into the pose of a water bird alighting on one leg.

The first half of the performance had a spellbinding effect. There was a narrative drive (hard to achieve in non-narrative dance performance) that propelled the choreography forward from one sequence to the next; but later it grew repetitive and lost its dynamism, petering out in the final dance. The women, left alone as the men around them collapsed to the floor, loosened their hair and danced in a tragic mode before walking off stage – an anticlimactic finale to a mostly absorbing evening.

There was much here to intrigue the mind and stir the senses. The dance was set before a beautifully conceived backdrop of a mountain range. Lighting was exquisite for its ability to set mood and selectively illuminate foreground or background. Blush-colored costumes by Robert Rosenwasser created a feathery effect, contributing to the birdlike feel of the choreography and catching the light in a play of light and shadow.

King’s inventiveness was on display as his dancers, in two groups of three, their bodies entwined, slowly rolled across the stage. They appeared to be a new life form, merging into a group of six and sprouting legs to become a caterpillar-like creature. In another sequence, a dancer with filmy strips of fabric attached to his feet and wrists, which stretched with every body movement, became a kinetic sculpture. In perhaps the most dramatic section, dancers flung gauzy rags into the air, which curled and unfurled in an aerial ballet of their own, finally coming to rest in a heap on the floor. Suddenly animated, the heap whipped into a tornado of movement, magically attaching to a dancer completely encased in rags. Moments like these were King at his very best with music and movement creating an aural and visual poetry.