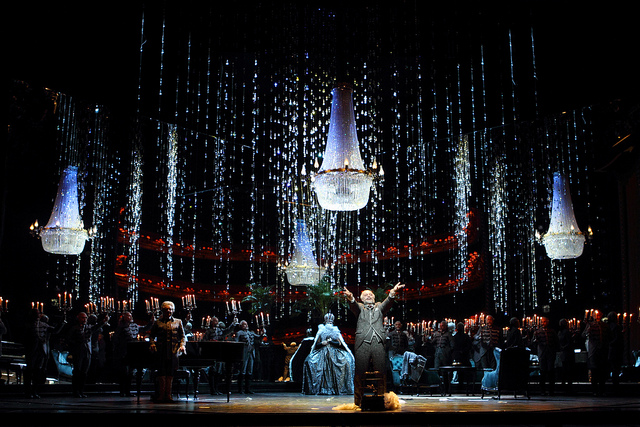 Tchaikovsky’s 1890 The Queen of Spades has a simple ghostly plot with a libretto – based on Pushkin’s story with the same name – by his brother, Modest, spread thinly over nearly three hours of eclectic music. Gherman is a rather dissolute army officer in late 18th century St Petersburg torn between his infatuation for Liza, the granddaughter of a domineering Countess, even though she is engaged to his friend Prince Yeletsky. Gherman becomes obsessed with ‘winning’ Liza from Yeletsky when he learns how the Countess has a closely-guarded secret about three cards that, legend has it, will guarantee his success at gambling. This become all-consuming for Gherman with fatal consequences for the Countess, Liza and ultimately himself.

The Norwegian Stefan Herheim was seen and heard during a pre-recorded interview and with his flowing locks has clearly put himself into the character of Gherman as he appears on stage. That is another story and more important is how uppermost for him can be the act of creation of many of the works he stages. At Bayreuth Richard Wagner was centre stage in Herheim’s 2008 Parsifal (review click here); the French-Sicilian conflicts of Verdi’s Les Vêpres siciliennes now involved the backstage machinations (review click here) at Paris’s Salle Le Peletier, the predecessor of today’s Palais Garnier, and where it was premiered. Now The Queen of Spades becomes a treatise on its composition and Herheim attempts to elucidate its biographical nature. Did Tchaikovsky want his central trio (Gherman, Countess, Liza) to represent himself, Nadezhda von Meck (his patron he never met), and Antonina Miliukova, the woman he married but – in his own words – was ‘not the least in love’ with.

Tchaikovsky had a constant struggle with his sexuality and this possible subtext to The Queen of Spades is something that Herheim makes clear for all to see in his production that was first put on in Amsterdam in 2016. Here the rather minor character Yeletsky become Tchaikovsky himself: he does not exist in Pushkin’s original and is an invention of the composer who wrote the verses for his aria. For Herheim this character’s rejection of Liza could be yet another mask Tchaikovsky could hide behind. (For some in the audience at Cineworld Basildon this was all something of a surprise as the very first thing I heard someone say – after reading the synopsis in the cast list – was: ‘Did you realise Tchaikovsky was homosexual?’) The director also fixates himself on a glass of cholera-infected water Tchaikovsky supposedly drank to cause his premature death. Although this has apparently subsequently been disproved, we frequently see one glass or more on stage.

Philipp Fürhofer’s single set is an oppressive Russian drawing room with a piano stage right. Tchaikovsky/Yeletsky has had a sexual encounter with Gherman. A caged bird automaton plays Papageno’s ‘Ein Mädchen oder Weibchen’ from The Magic Flute emphasizing Tchaikovsky’s admiration for Mozart. The guilt-ridden composer begins to compose and from then on Tchaikovsky/Yeletsky is virtually ever-present with the principal characters reacting more to him than each other. He is constantly playing the piano or conducting with his quill and later in the opera he is shown self-harming himself with it before being surrounded by three semi-naked Tchaikovsky/Saint Sebastian lookalikes. Throughout the men of the chorus are clones of Tchaikovsky, holding their glasses of iced water, whilst the women represent either Liza or the Countess.

Act I Scene II opens with Liza and her friend Paulina given a few moments of sapphic intimacy and the latter is now a trouser role, possibly a youthful Tchaikovsky contrasting with Gherman as an older version. The old Countess later appears wandering around in a dress shirt and loosened bow tie, while Liza – who has been formally dressed throughout – strips to reveal that she has on a similar shirt before she ‘drowns’ in icy water seemingly poured over her by all the Tchaikovskys, making this was a chilling scene in more ways than one! So this is autobiographical too as the composer once tried to commit suicide in the freezing cold Moscow river.

Intriguingly just as in Strauss’s later Ariadne auf Naxos a master of ceremonies announces fireworks and later a divertissement. Here the shepherdesses of the original Mozartian pastiche become Papageno (Milovzor) and Papagena (Prilepa). Further Herheim tropes abound as a giant mirror makes the audience ‘reflect’ on a public shaming of Tchaikovsky/Yeletsky by the chorus in the stalls as he kisses the hand of Catherine the Great only to discover ‘she’ is in fact Gherman in drag. The mirror was also in his Bayreuth Parsifal, as too, were characters in wings and here Liza has a black pair when she appears as a guardian angel firstly to Tchaikovsky right at the start, before returning at the end after Gherman is compelled to shoot himself. He had seen the Countess’s ghost after winning big with the first two cards she revealed to him before being tricked by the third one, not an ace but the ‘Queen of Spades’ of the title.

Herheim’s approach was intriguing and had several visually striking moments (notably the Act III ghost scene with the chandelier as a swinging censer) but having Tchaikovsky as the star of his own opera would have been a little less tiresome if the opera was a shorter and tighter work. Gherman is clearly unhinged from the get-go and his desire for Liza will obviously not have a happy ending for either of them.

Dramatically the cast did not let Herheim down but – as heard through the cinema loudspeakers – it was a vocally uneven performance. Vladimir Stoyanov was indefatigable as Tchaikovsky/Yeletsky mostly in his twirling arm mock-conducting, as well as, the ardent declaration of love that is the single extended aria his character gets. Sergey Polyakov returned to replace an ailing Aleksandrs Antonenko although he was also recovering from illness. Whilst not 100% he has a voice I would be keen to hear again in the future. This Gherman was full of angst and the force of will Polyakov obviously brought to his refined and astute singing – as he strove to get the best out of his afflicted resources – drew me into his performance.

Eva-Maria Westbroek sang Liza and does not now have all her vocal bloom of yesteryear and was troubled by constricted top notes. If not at her best, Westbroek’s voice still has plenty of allure and she remains a convincing actress. Though the Countess is at the centre of the opera, she does not have much to sing. How wonderful it was to see Dame Felicity Palmer singing at Covent Garden one last time. Staying true to the character and the music she reined in her voice and acted with aching venerability and vulnerability. Her standout moment was the poignant scene when the Countess sings herself to sleep with the filigree strains of a romantic song from her youth (‘Je crains de lui parler la nuit’ from André Grétry’s opera Richard Cœur-de-Lion).

Apart from Dame Felicity some of the very best singing came from the minor characters. The wonderful mezzo-soprano Anna Goryachova was luxury casting as Paulina and doubled as Milovzor for the Act II pastoral tableau with its eye-catching vignette from Jacquelyn Stucker as Prilepa. Character-wise John Lundgren was unrecognisable as a charismatic Count Tomsky (doubling as Milovzor) compared with his dour Wotan from earlier this season (review click here). His was a vocally resplendent performance and it was a shame he was not more involved in the opera.

Pappano and his fine sounding orchestra seemed attuned to every impulse of Tchaikovsky’s rich score and brought strong pacing, breadth, expressive character and subdued tension to his music. His conducting was particular gripping in the Act II bedroom confrontation between the crazed Gherman and the old Countess who dies of fright at the sight of his pistol.

Although not a staging I would care to revisit, I have not seen The Queen of Spades since the 1980s at English National Opera and despite its longueurs Herheim’s Konzept involved me more in the story than a traditional production might have done.

For more about what is on at the Royal Opera House or at your local cinema click here.