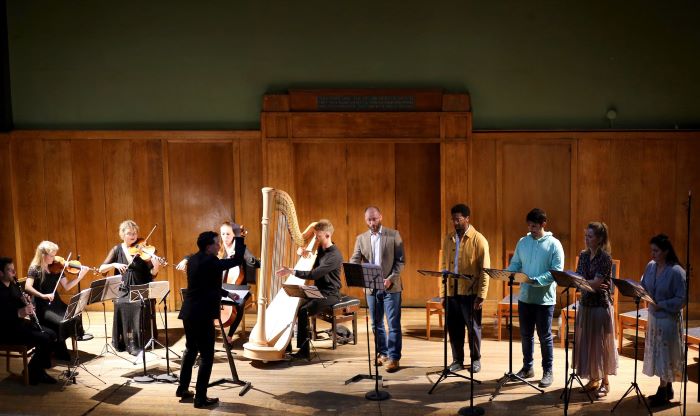 High on a balcony at London’s Conway Hall, the dead sing, audible only to one character on stage, The Old Gardener, and to us, the audience, in Robert Hugill’s The Gardeners. Echoes perhaps of Britten’s The Turn of the Screw in the use of the supernatural; but also echoes of Britten in the mellifluous vocal writing in this new chamber opera. I have enjoyed the beauty of Hugill’s vocal writing before, on a disc called Quickening (review). A similar sense of compositional control, a fine ear for beauty and a real understanding that less is more informed The Gardeners, too.

The inspiration for this piece came from an article about the families of gardeners tending war graves in the Middle East. Hugill brings into focus three generations from the same family; the action is set in a politically unstable region. The bodies in the cemetery are those of invaders of the land who communicate with The Old Gardener. The Gardener works with the Old Gardener and is a peace-maker; The Gardener’s son, The Angry Young Man, resents the dead. Also trying to heal the divides are the Mother and the Grandmother. The graves are vandalised and The Gardener suspects his son. As tensions rise, the Old Gardener collapses and dies; the Angry Young Man is filled with remorse, and at that point he, too, can hear the voices that previously had spoken only to his grandfather. These voices of the dead became The Old Gardener’s confidantes, to whom he could speak his frustration about ‘invaders’ that ‘desecrate’ his garden (that moment being one of the emotional highpoints of the entire work).

The libretto is by Joanna Wyld, with selected phrases adapted from A. E. Housman and Rabindranath Tagore. It is beautifully, artfully judged., and clearly set Hugill’s imagination alight: his setting is gentle yet powerful. Those reflections of Britten were there right at the start, and not just in the vocal lines, as there was a Brittenish tinge to the setting of the harp against the rest of the instrumentalists. Hugill’s part-writing is expert, an aspect particularly clear in the passages for The Dead. How poignantly the small group performed the lines ‘Misjudged for eternity! That is our plight,’ their insistent yet enigmatic voice was perhaps underlined by a repeated anacrusic viola rhythm at the Old Gardener’s ‘For the Glory of God! I listen, but I do not understand’. Hugill knows how to use tonal warmth at arrival points for maximal emotive weight (The Old Gardener’s ‘A righteous cause’) but he also knows how thinning a texture down can throw the attention on the words (voice and cello alone later in the same section). There are a number of instrumental interludes, and it is in these that we realise that the viola is given a hugely magnified role in Hugill’s writing (brilliantly, poignantly played by Joanna Patrick), part of Hugill’s sonic armoury to create a melancholic, elegiac atmosphere. On first pass, the flavour of these Interlude seemed to get progressively more intense as the piece progressed.

Flowers are an important part of the symbolism: later The Grandmother sings of two blooms: ‘Different colours, both have strong stems, both have beauty’; extending the analogy but taking it into thornier territory, The Angry Young Man compares villains to weeds.

Vocal diversity is finely calibrated, a touching trio (Gardener and Old Gardener singing a hymn against The Angry Young Man meditating on his own dissatisfaction with his lot) being a particular high point.

This performance was a concert performance, only the spatial separation of chorus and stage adding a concrete dramatic element. The rest was up to the singers and the small instrumental group of harp, violin, viola, cello and clarinet. Bedford-born conductor William Vann, who specialises in neglected British works and contemporary music, led the forces with sensitivity and eloquent gesture.

As the Old Gardener, Peter Braithwaite was wonderfully strong of voice and of conviction. If the countertenor of Magid El-Bushra was initially less characterful, he seemed to warm into the role and possesses a voice of much beauty. Towards the end, his outburst of existential angst (‘I have had enough. What is this life I’m living?’) was his finest moment.

The ladies, both mezzos (Flora McIntosh and Georgia Mae Bishop) worked beautifully together, the Mother’s line ‘It’s simpler for flowers’ bringing our attention back to a simplicity, that perhaps humans over-complicate and the result is war and conflict. Their scene (the third) ends with a beautiful verbal pun between ‘Amen’ and ‘ah-men’ before the music seems, to my ears at least, to bring in some Arabic references into its vocabulary.

The final interlude, between the ninth and tenth scenes, is preceded by the only moment in which all singers sing together. The final scene is given over to The Angry Young Man in dialogue with The Dead, who he can now hear. This was the finest moment for El-Bushra, and arguably Hugill’s, too. A sort of culminating coda that passes on the story on to the next generation (much like the end of Wozzeck, perhaps, with Wozzeck’s son cast into the same world), this was haunting, in every sense, indeed.