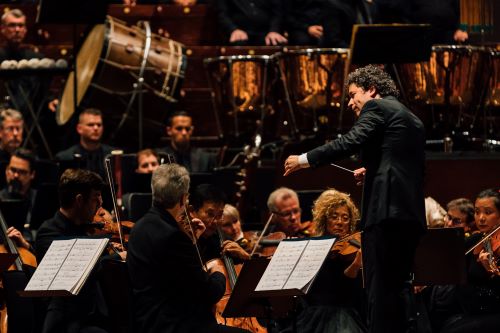 Adams – Must the Devil Have All the Good Tunes? (European premiere)

This evening brought the three-concert residency in Edinburgh of the Los Angeles Philharmonic Orchestra to a close. The LAPO – in their centenary year – are marking it by embarking on an extensive world tour. Their opening concert was at Tynecastle football stadium in the capital where they entertained what was a large family audience with music from Hollywood movies, and this opened this year’s Edinburgh International Festival.

One has to question the placing of the Barber piece here, it hardly fitted the rest of the programme – one could have chosen a more festive, upbeat work rather than this albeit beautifully written, yet overwhelmingly sorrowful work. Most certainly, Barber’s little masterpiece was stunningly performed showing off all the mastery and virtuosity of the strings – almost 100 players employed for a piece originally scored for two violins, viola, two cellos, and one double bass. Copland’s expression that ‘it’s not phoney…It comes straight from the heart’ epitomised this marvellously well played and iconic piece from the American orchestra. A more celebratory piece in harmony with the orchestra’s centenary would have been more appropriate.

The appearance of the glamorous Yuja Wang for the European premiere of John Adams’s third piano concerto was a major highlight of this year’s orchestral series, and she lived up to the moment by her eye-catching silver sequined full-length dress. The opening piano chords were jazz inflected, and when joined by the orchestra, there were hints of Prokofiev’s most avant-garde piano writing, a toccata in the wildest style; later invocations of Bernstein, Stravinsky, Bartók and again Stravinsky. The three movements follow each other without a break. Yuja Wang introduced a sudden change opening up a pastoral dream-like world in an extended piano passage, an idea seemed to come from a Prokofiev ballet Cinderella, in which she entered dialogue with woodwind, and brass, then slowly a build-up of tension by Wang, which was set against a shadowy theme on the basses. Once more syncopated rhythms invoked 20th-century modernists, and then suddenly this inter-swaying exchange of ideas all came to a sudden, and unexpectedly quiet ending. This was a remarkable performance of a piece written for Yuja Wang’s magnificent musical gifts, and surely, she will prove a fine ambassador for it during this orchestra’s worldwide tour.

In Tchaikovsky’s Fourth Symphony, the great brass chorale opened up immensely powerful and homogenous music-making from the orchestra – sometimes there is nothing finer than hearing world-class musicians playing flawlessly. However, in the great opening movement, the passion of the composer’s writing was swept aside by colourful orchestral glitter and it lacked the emotional power and desperate melancholia of Tchaikovsky’s score. For the most part, we heard virtuosic playing but little symphonic narrative – as was the case in the previous evening in Mahler’s ‘Resurrection’ Symphony. In the second movement, Dudamel shortened the phrasing trying to emphasise the passion, but instead, ideas were not allowed to develop and often the strings and brass were deafening the woodwind. In the Scherzo, the effect of the pizzicato section was often amusing with the conductor trying to conduct with his eyes and dropping his baton. Tchaikovsky wanted here the effect of balalaika music, but the Venezuelan maestro treats this symphony like an orchestral showpiece. In the Finale, we heard tremendously exciting, earth-shattering chords, and immensely powerful playing; the ideas played at an exhilarating pace. Mravinsky would have loved his players to play at this tempo but he would have been aghast by the lack of true feeling. The Russian folk song ‘In the field stood a birch-tree’ was swept aside in the swiftly moving rushing scales. The emotional strife of the composer was absent here – instead Dudamel offered in its place showmanship, glorious brilliance and glamour, typical of Hollywood and not Tchaikovsky’s symphony about Fate.