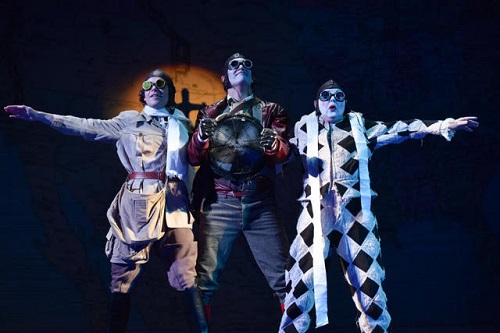 After four evenings of operatic death and despair, Sunday afternoon brought Opera Philadelphia’s delightful Love for Three Oranges. Although Prokofiev was Russian and the libretto that he crafted was based on a play by the eighteenth-century Venetian playwright Carlo Gozzi, whose Turandot Puccini mined for his last opera, The Love for Three Oranges’ roots are American. Commissioned by the Chicago Opera Association in 1918 after the composer’s first visit to the US, it premiered there three years later. Inexplicably, the opera is rarely staged in America.

For its local premiere, Opera Philadelphia mounted Alessandro Talevi’s production for Florence’s Maggio Musicale. It was a hit there in 2014 and a triumph at Festival O19. The plot is absurd, the music fresh and exciting, and Talevi’s production full of wit, humor and visual delights. Each sight gag was funnier than the last, creating the momentum that made this production bubble like champagne.

At the outset, four groups of twitchy theatre fans argue over the kind of show they want to see – tragedy, comedy, romance or farce. A fifth group of spectators, the Eccentrics, interrupts them to announce the performance of the main event: The Love for Three Oranges. Their collective wishes are met in this zany tale of a hypochondriac prince bewitched by Fata Morgana for laughing at her backside, who sets out in search of three oranges, each of which contains a princess. The prince ignores the advice that he should only open the oranges near water, and two of the princesses die instantly from thirst. The third survives, prince and princess fall in love and virtue triumphs over evil.

The set was a stage within a stage. A map of Europe before the Great War spanned the proscenium. Crowds appeared waving flags of empires that would disappear in the wake of the conflict, as well as the Hammer and Sickle, the banner of the Communists during the Russian Revolution. I am not quite sure why, but the flags of Great Britain and France together on stage prompted laughter. The King’s feathered helmet and decrepitude symbolized old, tired Europe, while his son, once out of bed, was full of vigor as he flew off to the New World in search of oranges.

In one of the production’s funniest scenes, the Prince, Truffaldino and Farfarello in goggles and leather caps fly across the Atlantic Ocean. The aviators puttered away, still earthbound, while the clouds flew by them – actually cutouts carried by people racing across the stage. The sight of those scampering legs brought a roar of laughter every time, and it was just as funny on their trip home.

This is an opera where the acting is as important as the singing, and Opera Philadelphia gathered an outstanding cast to give life to these fantastic characters. The Prince was the exciting young tenor Jonathan Johnson, who rose from his self-imposed lethargy (the result of an over indulgence in tragic poetry) to become a dashing man of action. His nemesis was Fata Morgana, the deliciously wicked Wendy Bryn Harmer, whose exposed bum encircled by a ring of bananas à la Josephine Baker prompted his guffaw.

Zachary James was hilarious as the Cook, the guardian of the three oranges. Dressed as a gigantic hen, he literally laid an egg on stage. The schemers for the throne, Princess Clarissa and Leandro, were given a droll, sinister touch by Alissa Anderson and Zachary Altman. Another particularly fine characterization was Will Liverman as Pantaloon. Ninetta was the lush-voiced Tiffany Townsend, whose soprano soared effortlessly through the Academy of Music. Prokofiev saved all of his melodic impulses and grand phrases for that one magical moment, and she seized it.

Most wonderful of all was Barry Banks as Truffaldino, equal parts Man Friday and clown. As agile physically as he was vocally, Banks was marvelous as the quick-witted, light-hearted, nimble and astute servant. His Truffaldino overcame all of the obstacles placed in his path with cunning and zeal. His deadpan stares into the audience were priceless.

Under Corrado Rovaris’s baton, the sounds from the pit were as effervescent as the action on stage. His pacing was excellent, always giving the players adequate support, but with enough leeway to make their magic. The chorus also gave their all, sounding great and acting up a storm.

Spirits were high as people exited the theater and most were smiling broadly. There was a buzz in the air for all four of the performances over three days in my deep dive into Opera Philadelphia’s Festival 019. The festival has found its local audience and drawn critics from across the country who, like me, rave about the quality, imagination and daring of its offerings.

Apart from attending four operas that I had never seen before, this year’s discovery was FringeArts, located in a 1903 building that was the first high-pressure fire pump station in the US. Tucked beneath the Benjamin Franklin Bridge on the Delaware River, its colored lights and laidback, beer garden ambiance was as cool as any performance space that I have seen anywhere. I had to pinch myself to realize that I wasn’t back in Switzerland.