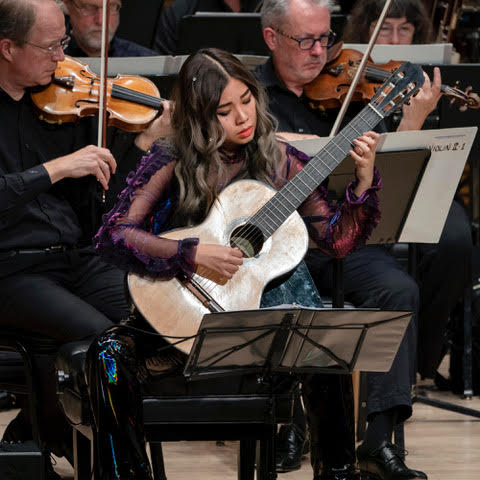 Purrington – Harp of Nerves for Guitar and Orchestra (world premiere)

The American Composers Orchestra (ACO) is dedicated to the creation, celebration, performance and promotion of American orchestral music: a place that composers of today can call home. Musically, the performances may be uneven at times, but the passion of all involved trumps such considerations. The ACO’s autumn concert, New England Echoes, led by Music Director George Manahan, featured works by composers with ties to the region.

Matthew Aucoin, currently artist-in-residence at the LA Opera and co-artistic director of the American Modern Opera Company, is a rising star in the current generation of young American composers. His new opera, Eurydice, will premiere in February 2020 at LA Opera, and is a co-production with the Metropolitan Opera. That’s about as prestigious as commissions come for an opera composer. The first piece in this ACO concert was his 2016 Evidence; the vision of a journey, perhaps an ocean voyage, or even one through space, was a reoccurring image that ran through his mind as composed it.

Evidence is classic sea-faring music, with the churning of the second violins, violas, clarinet and harp instantly providing forward propulsion. The score is full of orchestral color – glockenspiel, marimba, xylophone and suspended cymbals provide atmosphere as well as momentum – and excitement is generated by the shrill squawk of the clarinet, trumpet solos and the crack of a whip. The spaciousness of Aaron Copland’s music and the influence of John Adams is clearly heard, but Aucoin’s personal style prevails in this mesmerizing musical journey.

In 1922, Charles Ives self-published a volume of 114 songs that spanned the breadth of his work. The ACO commissioned three composers, Jonathan Bailey Holland, Hannah Lash and Hilary Purrington, to orchestrate five of the songs, which were sung here by the magnificent mezzo-soprano Jamie Barton.

’Memories’, orchestrated by Purrington, was composed by Ives when he was a student at Yale University. The two-part song, with its contrasting depictions of the happy anticipation of waiting for the curtain to rise at the opera house and a bittersweet recollection of an uncle’s favorite tune, illustrates Ives’ penchant for the nostalgic and common place that was the bedrock of his eclectic, highly personalized compositional style. Purrington’s arrangement of ‘Memories’ captured the excitement and simplicity of the song perfectly. It was also the best of the five songs in which to enjoy Barton’s plummy voice.

She sang ‘Immortality’ with a classic stateliness, so rarely encountered these days, and revealed the velvety richness in ‘The Housatonic at Stockbridge’, but the settings by Jonathan Bailey Holland and Hannah Lash of these two songs, as well as ’The Cage’ and ‘Autumn’, required something more than sumptuous sound.

One encounters a far more complex Ives in these four songs. Holland and Lash captured the details and emotional depths of Ives’ original piano accompaniments in their evocative orchestrations, but substituting orchestra for piano shifted the focus away from the singer. This was perhaps inevitable: hearing these familiar piano accompaniments reimagined was a novel experience. Holland and Lash remained true to Ives, but more incisive singing and penetrating interpretations than those provided by Barton were needed to compete with the orchestra.

Purrington is a multifaceted musician and performer whose upcoming projects include a commission from the Philadelphia Orchestra. This was the world premiere of Harp of Nerves, a guitar concerto commissioned by the ACO that she wrote for the sensational guitarist JIJI, her former housemate at Yale. To gain a better understanding of the guitar, Purrington took lessons and became proficient on the instrument. In Harp of Nerves, she envisioned the orchestra as an extension of the guitar, which functions as a sort of ‘control center’ tethered to each instrumentalist.

It opened with the sliding sounds of the contrabasses, and the guitar entered playing fragments of sound. As the orchestra textures thickened into something more cohesive and homogenous, the solo guitar took control. Purrington explored the full range of guitar effects from percussive strokes and steel guitar slides to Spanish-style melodic flourishes. The orchestral writing explored a far greater range of color and style. A march coursed its way through the score, which was laced with delicate, bell-like percussion effects, shimmering passages for the violins and piercing jabs from the flute.

JIJI is an artist who takes control both musically and visually. For this concert, she channeled Elton John at his Glam Rock best through her shiny pants and death-defying platform shoes. The shots of deep magenta that flashed from her blouse as she played were wonderful. JIJI’s acoustic guitar was amplified to put it on an equal footing with the orchestra, but her playing on its own might have sufficed.