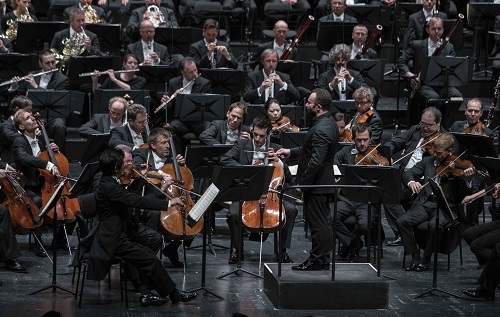 Mahler – Symphony No.6 in A minor

‘Keine Pause’ (‘no interval’), announced the programme booklet for this Berlin Philharmonic performance of Mahler’s Sixth Symphony. Uncontroversial performance practice, one might have thought. Far more controversial, of course, is the ordering of the internal movements. I shall admit my heart initially sank on noting that Kirill Petrenko intended to follow the common recent practice of Andante–Scherzo rather than vice versa, yet told myself that this would be an opportunity once again to revisit my judgement on the matter, a judgement that is in any case entirely pragmatic. Were I to hear a performance ordered Andante–Scherzo that convinced me, I should be delighted, for it would be perversely dogmatic to reject any performance on textual grounds alone. If it works, it works.

So, did it work? There could be no doubting the musical, not merely technical, excellence on display from Petrenko and his orchestra. (Does one ever hear from the Berlin Philharmonic the kind of Schlamperei in which its Viennese counterpart might occasionally indulge?) This was, by any standards, an impressive performance. However, it was only truly in the finale that I felt everything came together, both intellectually and emotionally. That was not simply a matter of the movement order, although I am sure that played a part. Ultimately, I think, Petrenko hears much of this music differently from the way I do. There is nothing wrong with that: certainly not for him, at the helm of the Berlin Philharmonic; nor, I hope, for me either. Mahler is big enough to take a variety or, to use a more Mahlerian word, a world of approaches. I ask that any reservations noted here should be taken in that spirit, as trying to explain why I felt – or did not feel – the way I did (not), and not as mere carping.

It began as a quick march, monstrously metronomic: by design, of course. Timbre was hard-edged too, harder than one can imagine it ever sounding in Vienna, closer to Shostakovich than to Berg, though certainly not to be heard reductively in any respect. The chorale proved as inscrutable as I have heard. Only with the ‘Alma’ theme did the music finally yield, its echoes yielding further still. On the exposition repeat, I was struck by how the strings seemed to dig in deeper still: no ‘mere’ repeat, then, in this unusually ‘Classical’ practice for Mahler. The wandering strangeness of Mahler’s voice-leading likewise registered all the more strongly this second time around. The development scored highly on percussion-led mystery: not only cowbells, but celesta and glockenspiel too. Was that Shostakovich’s Fifteenth we heard before us in the distant – or not so distant – future? Even when not playing, those instruments’ shadow and that of the chorale too loomed ominous: in, for instance, the duet between horn and violin or the collision between second violin pizzicato and celesta. How eerie in this light did the sped-up chorale sound in the recapitulation, like forlorn running on the spot. And how desolate, how emotionally spent was the coda’s announcement.

Next came the Andante, its contours drawn lovingly, yet never too lovingly. Schoenberg’s celebrated analysis suggests he would have thought well of Petrenko’s way with this movement (if not, necessarily, with its placement). It was meaningfully shaped, above all in its climaxes, with none of the overt interventionism that can so disfigure much contemporary Mahler performance. Mahler’s music truly developed, as one realised upon looking back. The return to A minor for the Scherzo, however, unsettled – and not, for me at least, in a good way. This has yet to sound right for me, for all manner of reasons, analytical and hermeneutical. Perhaps one day it will; for now, I remain in the camp of Mahlerians such as Pierre Boulez and Bernard Haitink. That said, Petrenko proved more yielding than the first movement had led me to expect. This certainly was ‘good unsettling’. The Scherzo emerged more sardonic than brutal, especially in its liminal passages. Tutti passages again had more of a Shostakovich than a Central European sonority to my ears. The way, however, it petered out, exhausted, was quite something: not only different from what we had heard before, but also clearly a prelude to the ultimate tragedy of the finale.

Its opening cry instilled fear of God, followed by some of the most extraordinary, now unabashedly Bergian sonorities I have heard here. Malice and fear sounded on both side of the subject/object divide. There was defiance too, though, in necessary reaction: just as frightening in its way, when a motif passed from violas to second violins to firsts; or when the wind attempted to take us where the material demanded, yet could not. There was also relief of an almost Mendelssohnian variety, rendering what was to come all the more cruel. Once the first hammer blow had fallen, its trauma could never be escaped. The sweetness of strings in its wake was almost too much to take. After that, let alone the second, there could be no doubt of where we were heading. The recapitulation could hardly have opened in greater despair: musically earned, not hysterically whipped up, as a lesser conductor might have done. Mahler – and we – tried to hope, and how, yet it was in vain. So much so, indeed, that I found myself wanting the third hammer blow, its denial perhaps as cruel as its fall would have been. The blackness of the close spoke for itself. Aftershock, rather than the Scherzo’s nihilism.