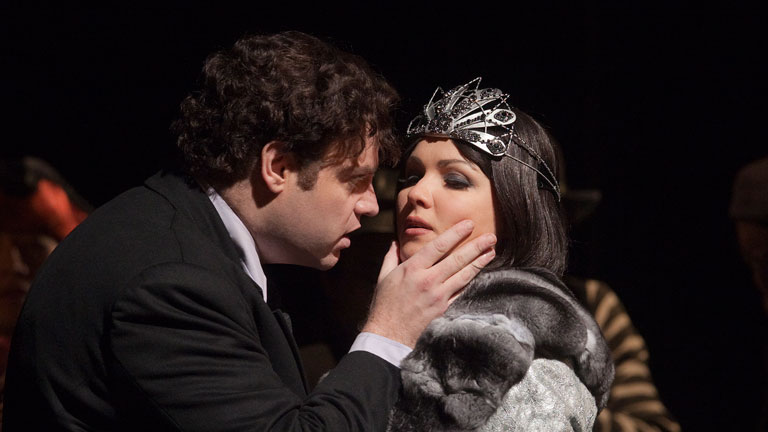 Because there is no real need in these sad times to always be original, I will refer to my 2015 review about a revival of this Bartlett Sher production that was new in 2009 when it also was Live in HD worldwide to cinemas. I wrote in those happier days:  ‘I have rarely enjoyed opera at the cinema more than this Les contes d’Hoffmann – and realisation also dawned while I was watching it (if we ignore my penchant for Wagner) that this work must be one of my favourites.’

I went on to explain how ‘Offenbach creates a number of issues for a director and conductor as he never lived to see his opera performed. The composer had a premonition that like one of Hoffmann’s three loves, Antonia, he would die prior to its completion and indeed he did so about four months before its première, with the piano score completed but only the Prologue and Act I orchestrated. As a result, different editions of the opera soon emerged, some bearing little resemblance to the authentic work. The version performed at the opera’s première was by Ernest Guiraud, who completed Offenbach’s scoring and wrote recitatives for the spoken dialogue in the original score. Over the years new editions have continued to appear trying to push the work towards “authenticity”. Often there is some extra music by Offenbach not intended for this opera in the Giulietta act: this includes ‘Scintille, diamant’ whose tune derives from the overture to his operetta A Journey to the Moon and a Sextet (sometimes called a Septet, involving the chorus as a character). In a version apparently cobbled together by James Levine from existing sources for the first run of this production in 2009 both of these were retained.’

Further mentioning how ‘Also something that creates much debate is the sequence of the acts: apart from a Prologue and Epilogue there are three acts, telling different stories from Hoffmann’s life. They are basically independent (though Olympia is mentioned in the Antonia act) and can easily be swapped without affecting the overall story. Offenbach’s order – as presented here – was Prologue–Olympia–Antonia–Giulietta–Epilogue, but often in the last century, Giulietta came before Antonia and only recently has this original order of the acts been restored. In my humble opinion, I always feel that that the musically and dramatically more accomplished Antonia act should come third, but this staging made a strong case in defence of Offenbach’s original order.’

In 2015 director Bartlett Sher was interviewed during one of the intervals by Live in HD host Deborah Voigt (who also introduced the 2009 broadcast) and revealed some of his ideas for his Hoffmann: ‘Strangely, I was a little less attracted to Hoffmann than to Offenbach. I based it a little bit on Franz Kafka. It has a lot to do with Offenbach’s sort of Jewishness. So, there is this guy who is secretly inside the culture who never thought that he belonged – so he tries to gain access to the culture by sleeping with all the different women he can find. It’s an assimilation problem which never works out in his favour and Nicklausse follows him along and sort of pushes him out of the problem and more into being an artist.’ To be truthful it is clear from what we see that Hoffmann is indeed something of an outsider but in no way seems alienated from the society around him; he is a romantic idealist whose goals exceed his reach.

As I wrote before: ‘The stage imagery is complex: Kafka is there and so is Magritte with the bowler hats and giant eyes, there is a Felliniesque orgy in decadent Venice and much more. This includes references to French and German Expressionist cinema and there is what looks like the female robot from Fritz Lang’s Metropolis in the background of the Olympia act. Most of the costumes – Hoffmann just wears a simple suit for example – suggest we are somewhere in Europe between the two world wars but Paris features heavily with ballerinas in rose-pink tutus representing Olympia, all the pasty-faced clowns with red noses and some mime artists, as well as, the long-legged chorus girls in black Victoria’s Secret-like lingerie straight from the Crazy Horse Saloon.’

My thoughts remain how ‘Sher – together with set designer, Michael Yeargan, and the costume designer, Catherine Zuber – finds the emotional core of a complex opera with tremendous imagination, style and wit. Hoffmann spend most of his time at a small writing table with its old typewriter and a desk lamp. The Muse of Poetry – who transforms herself into his devoted friend, Nicklausse – believes that this is where he should stay because love can only help to distract him from his poetry. Nicklausse will be central to all the tales Hoffmann recounts. The poet is currently infatuated with Stella who is starring in Don Giovanni at the opera house and Luther’s tavern next to the theatre is the only place where Hoffmann seems at home. During the Prologue, encouraged by the inebriated students who wile away their time in the tavern listening to his stories, Hoffmann sings his ballad about the dwarf Kleinzach which is a slightly disquieting one for anyone with twenty-first century PC sensibilities – as is all the references to the bankrupt Jew Elias in Act I. After the Prologue, through flashbacks, Hoffmann broods about his three previous romantic obsessions that all ended badly. Is what we see supposed to be truth or fiction? Possibly the latter, because characters and images are jumbled right from the moment the curtain opens at the start of the opera with certain characters often reappearing during the remaining acts, especially the attractive girls in their underwear and the Olympia-like ballerinas.’

Ideally any production of Les contes d’Hoffmann would adhere to Offenbach’s instruction for one soprano to sing all three previous love interests plus his current innamorata, Stella; with one bass-baritone as all four villains who are Hoffmann’s nemeses. We get the latter but not the former after Anna Netrebko declined to do them all as was initially planned.

Earlier in 2009 Joseph Calleja replaced Rolando Villazón in this new production and he was singing the lovelorn – and unlucky in love – Hoffmann for the first time. It is not clear whether he has ever sung it since (if anyone knows when or where please let me know) and Calleja did well without seeming ideally suited for the role. (It had been Villazón who was the best Hoffmann I have ever seen when he sang at Covent Garden in 2008 and his portrayal of the über-romantic protagonist verged on credible erotomania.) Regardless Calleja was totally convincing and suffered all the slings and (Cupid’s) arrows of unrequited passion with impressive stoicism. From the Prologue’s drinking song (‘Il ètait une fois à la cour d’Eisenach‘) onwards his voice – as heard though my headphones – sounded just slightly too fragile for Hoffmann, yet, his phrasing was so exquisite and the general timbre so appealing that the more he relaxed into the role the more persuasive his ‘take’ on Hoffmann became. When Hoffmann brutally despatched Schlemil (Michael Todd Simpson) in the third act all his character’s previously-repressed anger at the vicissitudes of his (love)life was brought to the fore very convincingly.

Bass-baritone Alan Held brought a commanding and chilling stage presence to his villainous roles (Lindorf/Coppélius/Dr Miracle/Dappertutto) however, for me, there was too little vocal variety between the four and especially when Held fondles a huge diamond in Act III and sang ‘Scintille, diamante’ he could not summon up the oleaginously satanic tones that are ideal.

However, Kathleen Kim (in another role debut) was the perfect ‘living doll’ with all her jerky mechanical movement and some formidable note-perfect coloratura for ‘Les oiseaux dans la charmille’ with all the high E-flats. Anna Netrebko was a haughty divaish Stella and commanded Act II as Antonia; melancholic and housebound yes, but was she frail enough, definitely not. Antonia is sickly and will die if she sings too much and Netrebko – who sang with her signature dark soprano sound, warmth, and passionate zeal – looked far too healthy and at times she overpowered Calleja during their duet. Ekaterina Gubanova lacked the sensuous voluptuousness in personality and voice demanded of Giulietta, a courtesan so irresistible that she can steal Hoffmann’s reflection (soul).

In 2020 we can use the term ‘gender fluid’ to describe Kate Lindsey’s androgynous portrayal of Hoffmann’s protective Muse, Nicklausse, whose highlight was her second act ‘C’est l’amour vainqueur’ when she cautions Hoffmann to appreciate that artistic love exceeds romantic love. Nicklausse is pivotal to all five parts of Hoffmann (three acts plus a Prologue and Epilogue); she is, at times, a companion, confidant, defender, someone who pre-empts certain events, and – possibly throughout – Stella’s romantic rival for Hoffmann’s heart.

Elsewhere, Alan Oke provided comic relief as the servant, Frantz, of Antonia’s father, Crespel (Dean Peterson). Oke also had three other minor roles: Andrès, Stella’s servant; Cochenille, Spalanzani’s servant; and Pitichinaccio, one of Giulietta many admirers. Dean Peterson was excellent as Crespel who profoundly expressed fatherly love for Antonia and his deep despair at her death.

The Met’s chorus of waiters and eager students revelled in the Prologue’s drinking song and Dou Dou Huang’s crotch-stretching choreography for some scantily clad ‘showgirls’ enhanced the Venice Carnival-like atmosphere of Act III. Just as good, was his enchanting choreography for the Act I mechanical dolls.

I’ll end this review much as I did in 2015 and conclude ‘When everyone sings at the end “Love lends man greatness. Tears make him greater still” it brought great poignancy to these concluding moments’. However, ‘complicit in the success’ in 2009 was the Met’s former music director James Levine for whom life – in many ways – was to take a downturn in the following years. His account of the score – from the always reliable Met orchestra – was redolent of the sparkling effervescent lightness so typical of French opéra comique.

For more about the Nightly Met Opera Streams click here.