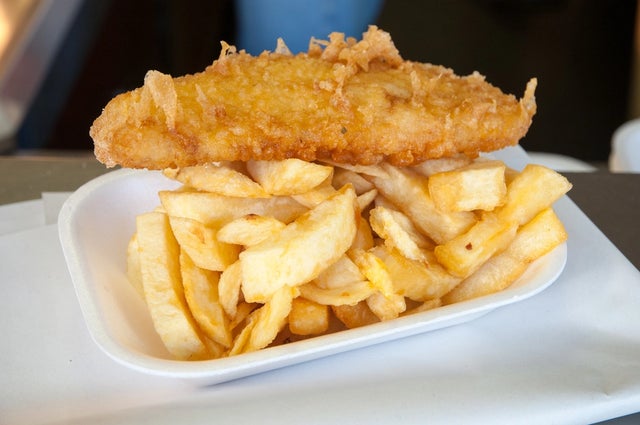 Greater London has an ever-increasing number of excellent takeaway fish and chips shops. Takeaway was always part of their tradition. A teacher at Whitgift School – my immediate neighbour- said of me, you can take your Lancashire lad away from Lancashire, but you can’t take him away from his fish and chips. Fair enough. Three bus stops to my right or half an hour walk, is an outstanding Cypriot-managed chip shop. One bus stop to the left or a fifteen-minute walk is a chip shop run by people from Avelino (south of Naples) overjoyed to find a client who can chatter in their home dialect. Chippies chatter like barbers. It’s their lifeblood. And they want their clients to be happy. What’s not to be happy about this delectable food combination? To add to your pleasure – indeed, to define the pleasure – both these shops cook with rapeseed oil. Costs more says Avelino with a shrug, but clients like it and it’s fresh every day, but the increased trade means I haven’t had to pass the cost onto our buyers. So no nasty smell of overused cheap oil as you near these shops.

Avelino has closed for restructuring which they reckon will take two weeks: think five to be sure. So I am left with Cyprus, who are in a stronger position than ever, because of the temporary closure. In both shops I rarely have to wait beyond the ten minutes of getting my order ready – haddock and chips with a pickled gherkin. Last week as I paid my £7.50, Mr Cyprus dropped his voice and said I know you like gherkins, so you’ll find a little surprise from us when you get home. In fact, there were THREE gherkins. But I’d rather have no gherkins than three. And small is not in their vocabulary. I always ask for a small chips  and am regularly dismayed to find more than I can get onto the large plate when I get home. But I’m greedy and eat them all with a second serving! I haven’t worked out a solution to this.

My ritual is quasi-religious: I set the table with the biggest plate, knife, and fork. And salt and vinegars (more below about vinegars) as these shops either give me too much or too little, so I want to add my own. Mercifully, they always ask, salt and vinegar? No thank you to that.

On my walk toward Cyprus, music invariably wells up in my mind and soon becomes aired to the winds. The first one is obvious and may have its origin in the Lancastrian Music Halls:

Chips and fish, chips and fish:
Ee by gum what a champion dish.
Oh, what a smell when you fry ’em,
Just take a penn’orth and try ’em.
Put some salt and vinegar on,
As much as ever you wish.
You can do, do, do without supper if you’ve
Got a bob’sworth of chips and fish

(a bob was a shilling [12 pennies] in old money, which allowing for inflation would be about 3 pence today. Ritornello means back to the beginning. And repeat ad infinitum.)

The other song which arises during the walk is less obvious. It was my dad’s showstopping party piece with an all-together-now chorus. His nieces never made a visit without requesting it. It’s what is known as an accumulative song with ad lib ritornello:

The Cypriots sell their wares in sturdy, closed boxes, then in plastic bags for ease of delivery. Yesteryears were always wrapped in newspaper which was always the best for insulation. No easy replacement under today’s regulations. When I have cleaned the boxes of fish smell I put them in recycling. I hope that is right.

Salt is a catalyst: it brings out the flavour of whatever it comes into contact with. The moment your meal tastes of salt, you have used too much of it. And you can’t take it out. So go gingerly. I always use sea salt. The Salt of the Popes, collected by the Vatican and others, from the shores of northeast Italy, is available in some upmarket stores. Try Waitrose (though other supermarkets are available).

Vinegar is more complex. Many people prefer lemon juice. I can see why: it’s less harsh than vinegar and like salt, lemon juice brings out flavour of whatever it contacts, even where there was no flavour before. But not for me. (I do go for Jane Grigson’s tip of using lemon juice when I’ve been unlucky enough to buy an avocado that’s tasteless, and I want to make guacamole. Warning: Mrs Grigson’s tip doesn’t work when the avocado has gone BAD, which is to say, dark brown at the core.)

My fish and chips table is ready to deal with whatever my taste buds want in that moment. Traditional malt vinegar is much prized and Sarson’s have been brewing this from barley they tell us on the bottle, since 1794: you will find it the least expensive in every supermarket. Harsh? Well yes, but perhaps you would like to taste the grape with your vinegar. I cook with white wine and red wine vinegars, though since I have been in the UK, I have been unable to find champagne vinegar, widely imported in Italy and surprisingly inexpensive there. There is also balsamic vinegar – not strictly a vinegar at all, but a ‘grape must’, made by the families of Modena, brewed and stored in smaller and smaller wooden casks each year until it is rich and syrupy, ready to be bottled, until almost, it won’t come out of the bottle. The longest-stored ones will cost you a patrimony, but cheaper ones are in supermarkets too. Just check that they are from Modena: the minimum requirement.

Enjoy your own lockdown fish and chips if you get the chance!

1 thought on “Lockdown Fish and Chips”