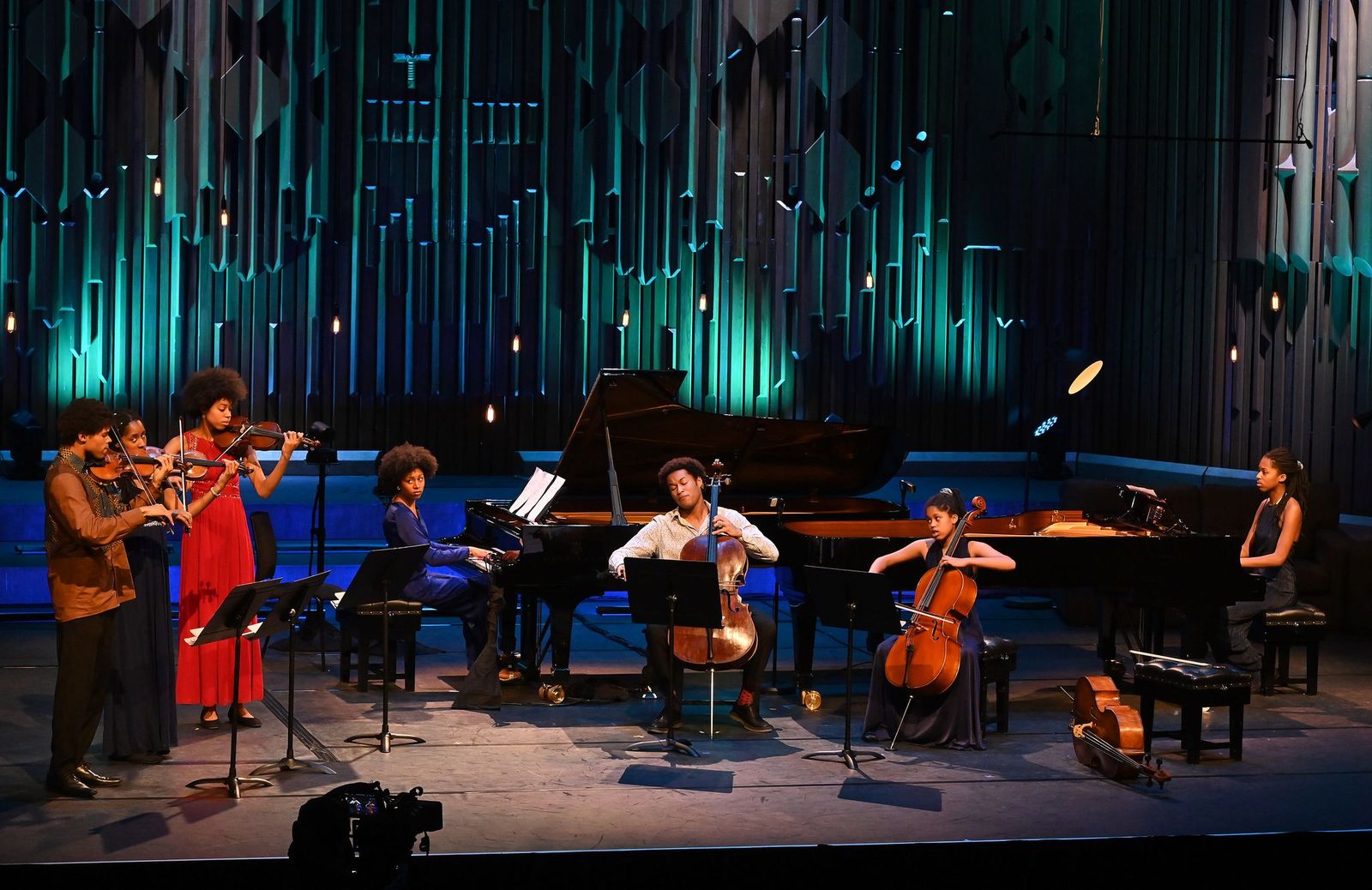 I began a recent recital by siblings Sheku and Isata Kanneh-Mason at the BBC Proms (review click here) as follows: ‘The remarkable Sheku Kanneh-Mason and his equally remarkable nuclear family have become like personal friends to those with an interest in classical music or, alternatively, the happiest of success stories. We have become so familiar with their family home in Nottingham that I can almost believe I had actually been there myself. On BBC iPlayer you can still see … Alan Yentob’s 2020 This House Is Full of Music in his Imagine series. And you can even read about them all in House of Music: Raising the Kanneh-Masons written by Kadiatu – their justifiably proud mother – which has recently been published (Oneworld Publications). Now there was much to celebrate in this BBC Prom showcasing Sheku’s cello and Isata accompanying him on piano (with younger sister Konya turning the pages). These are just three of seven amazingly talented Kanneh-Mason siblings.’

Now for a small socially distanced Barbican Hall audience and a global one online, there was this showcase for the prodigiously gifted family and an opportunity to promote the book in an interview available to those watching the live stream. Of course, their influence on the ongoing debate about diversity in classical music must not be ignored and I will let those who want to hear more from the Kanneh-Mason clan watch them talking to Josie D’Arby. However, the crux of the issue is – as Sheku – explained ‘People often use this word talent, unless that meets opportunity then nothing special can happen.’

Born to Stuart and Kadiatu – musical, of course, but non-musicians – all seven were state school educated at The Trinity Catholic School, Nottingham, which encouraged their interest in music. By order of age, Isata (24), Braimah (22), Sheku (21), Konya (20), Jeneba (18), Aminata (15) and Mariatu (11) are multi-talented as this evening showed when we saw and heard, three violinists, three cellists, and three pianists playing – what presenter D’Arby called – a ‘special programme of some of their favourite pieces, spanning three centuries of music-making.’ It was a completely critic-proof programme as the Kanneh-Masons are all at different stages of their musical journey. The only negative (sorry!) was Josie D’Arby’s increasingly gushing presentation which ended up making me feel we were watching an end-of-term school concert hosted by a proud – but over-enthusiastic – music teacher.

The most substantial work we heard was Shostakovich’s First Piano Trio which was some of the earliest music he composed. In its innate lyricism it seems a homage to Shostakovich’s compatriot of a previous generation, Rachmaninoff. Though in the passages of greater angst it sounds echt-Shostakovich. A trio of Isata, Braimah, and Sheku brought out all the music’s lyricality and drama in an exceptionally fine performance. I am loath to single someone out though I am increasingly impressed by Isata’s virtuosic pianism.

Following was more keyboard elan – in equal parts animated and characterful – from Konya and Jeneba playing two Schubert Impromptus. There was a consummate rendition of Tchaikovsky’s popular Mélodie from Braimah’s eloquent violin and Isata’s calm and understated accompaniment, aptly described by D’Arby as ‘three minutes of bliss’. The three youngest Jeneba, Aminata, and Mariatu showed rich promise in their unaffected, alert, and lucid performance of Mozart’s sunny Allegretto from his B-flat major Piano Trio. The emotional intensity of Samuel Barber’s Cello Sonata (again an early work) suggests Brahms, though this music for cello and piano is more angular and I think Sheku and Isata may have overdramatised it rather more than necessary, though who am I to second-guess them? Next Isata relished the genius of George Gershwin’s Three Preludes and particularly excelled in their energetic syncopations.

To bring the concert to a close all seven siblings performed together and included some eye-catching instrument swops for pianists Konya and Jeneba to, respectively, violin and cello! Eric Whitacre’s ‘The Seal Lullaby’ is originally a choral work but was played in an arrangement by Simon Parkin and it was lilting and slightly mournful, with my thoughts turning to Richard Strauss’s Metamorphosen. Familiar from Alan Yentob’s This House Is Full of Music was the Kanneh-Masons’s own mash-up of tunes from their favourite musical Fiddler on the Roof. Klezmer is born out of the hardship of an otherwise resilient people who retain a devil-may-care attitude. As compelling as it sounded, perhaps the occasion got the better of them as they were not entirely successful in replicating the sheer joie de vivre of the music and the musical. However, the ensemble poured their hearts and souls into the encore the thunderous applause from those in the Barbican Hall demanded. This was their arrangement of Bob Marley’s anthemic ‘Redemption Song’ which proved to be a suitably fitting, thought-provoking, and inspirational conclusion to a wonderful Live from the Barbican evening.

The series continues until 13 December and is available for both live attendance and live stream. For a list of the upcoming concerts please see click here. (Update on 19 November: the Barbican announced that its autumn concert series Live from the Barbican will be made available On Demand until England’s lockdown is lifted [click here]).