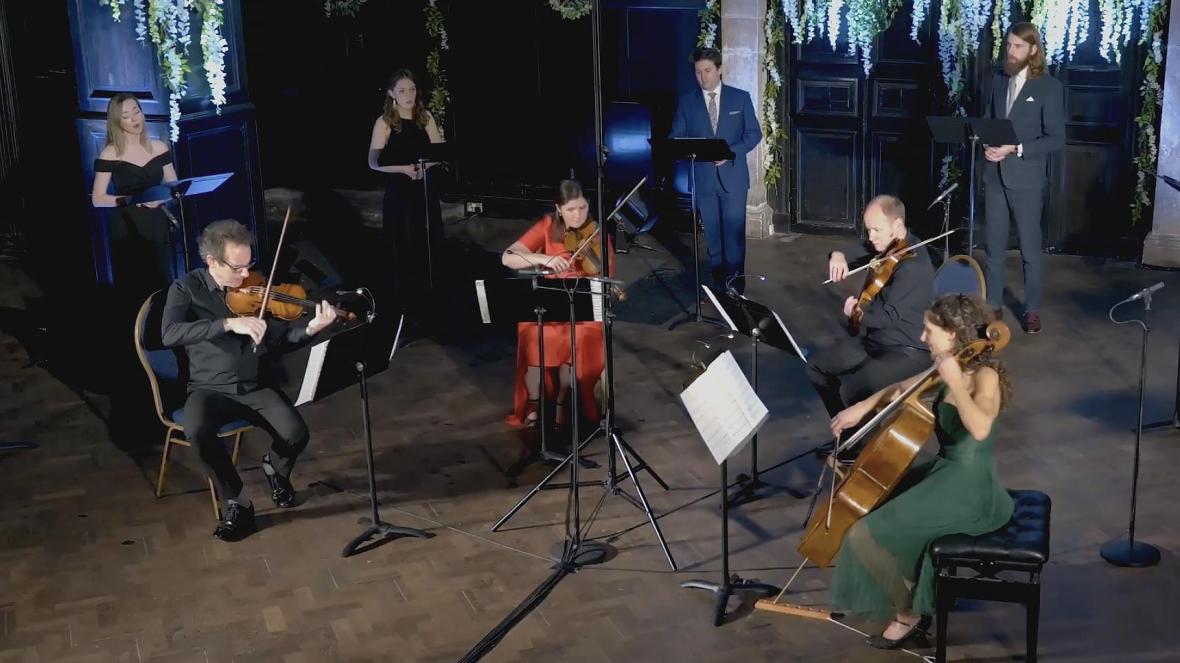 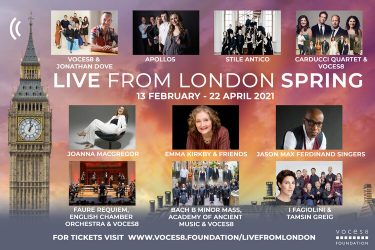 A departure for the LIVE from London format (click here) today: placing an instrumental ensemble, the award-winning Carducci String Quartet, as the central focus of attention, then uniting strings with first solo voice and then choir. And we get various trips to America …

Wonderful to see some Philip Glass here. The Third Quartet’s music was originally found in Paul Schrader’s film on the writer and philosopher Yuko Mishima, Mishima: A Life in Four Chapters. The quartet scenes were shot in monochrome and represent flashbacks to childhood (Glass also writes for full orchestra and string orchestra in the movie). Each of the six movements has a title (sadly not given in the accompanying programme): ‘1857: Award Montage’; ‘November 25: Ichigaya’; ‘Grandmother and Kimitake’; ‘1962: Body Building’; ‘Blood Oath’; ‘Mishima – Closing’. The music is as meditative and mesmeric as one might expect from this composer; but hearing it on four strings gives it a sort of fragility that seems to add to the power. The ‘cries’ that open ‘Grandmother and Kimitake’ carry great power, especially when played as viscerally as here; the tender strains that somewhat unexpectedly open ‘1962: Body Building’ seem to reflect the general intimacy of this music; certainly. the calm of the final ‘Mishima – Closing’ is utterly remarkable. All credit to the Carducci Quartet for sustaining Glass’s unique world so perfectly, each strand of the textures so perfectly calibrated. All told the piece takes around 20 minutes but within that space it creates its own microcosm.

Composed while on vacation in Spillville, Iowa, Dvořák’s F major Quartet, Op.96, often subtitled ‘American’, is suffused with the atmosphere of the New World. Much of the material is of pentatonic bent. It takes a great performance to tread the tightrope between the expansive melodies and the dynamic structural trajectory of the first movement; yet that is precisely what the Carducci Quartet achieved. The viola plays an important role in Dvořák’s Quartets (the composer was himself a player) so it is only right to credit the characterful, strong contributions of the Carducci’s violist Eoin Schmidt-Martin.

There is certainly an indigenous American flavour to the theme of the second movement, Matthew Denton’s violin singing sweetly over a gently pulsing bed of sound provided by the remaining three players; Emma Denton’s cello rejoinders were just as eloquent, setting up the perfect atmosphere. It is said that birdsong informs the Scherzo; certainly, sprightliness does, the Carducci’s rhythms pinpoint and dancing; all credit to Matthew Denton’s tuning in the violin’s higher reaches, too. The finale is a rondo, taken here at quite a lick (it is marked Vivace ma non troppo). Again, the tightrope – here between rollocking fun and rhythmic control – was perfectly negotiated.

Barber’s Dover Beach sets a poem by Matthew Arnold. It is surely one of Barber’s finest works (as an aside, why does nobody play his Piano Sonata anymore?). Frederick Long’s fine, resonant voice is ideal for this piece; he is able to float lines over the Carducci’s gossamer threads. Highly atmospheric music, but in a very different way from the Glass, and beautifully, evocatively performed. Frederick Long’s diction and sound were impeccable, his understanding of the terrain complete; I look forward to hearing more from him.

We heard some Ola Gjeilo before in the VOCES8 concerts (he is a former Composer-in-Residence): Northern Lights sung by Voices of Singapore conducted by Darius Lim. Here we have Gjeilo’s third setting of Sacred Heart (Ubi Caritas), harmonies lit as if from within (Gjeilo also set it in 1999 and 2012). It was left to Dougie MacLean’s stirring and heart-warming Caledonia in Blake Morgan’s arrangement to close; lovely to hear the underpinning of the choir with the strings.

A fascinating concert and one that may well set a trend. I hope so, certainly.