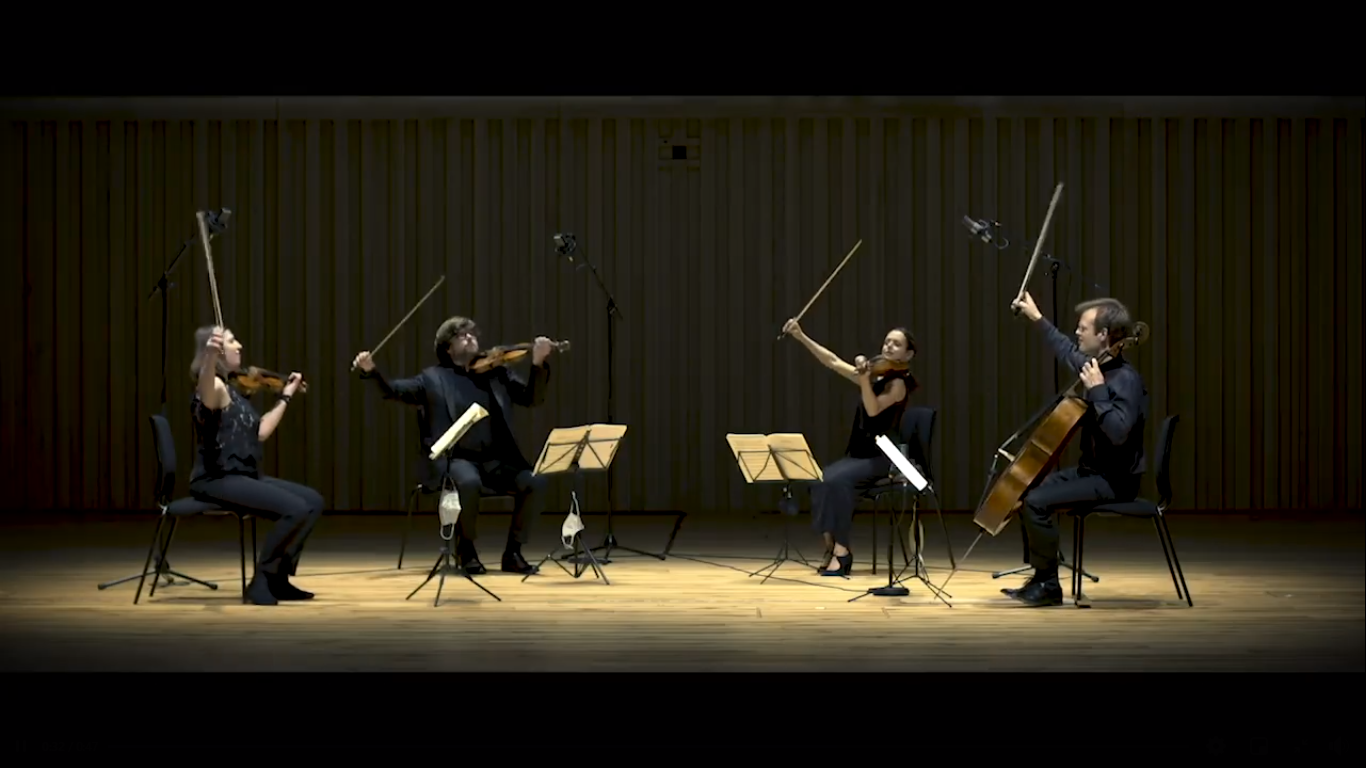 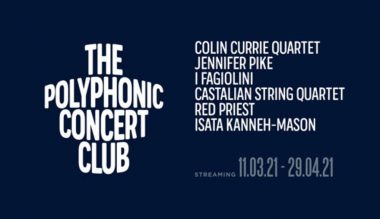 It was a joy to travel to Manchester for this beautiful programme while there on (piano-oriented) business; and how strange it felt to be the one audience member in the beautiful Stoller Hall. Entrance had been via a back door thanks to an anonymous, video-linked security person (slightly spooky) and the – to me – labyrinthine back corridors of the hall.

The strains of a Haydn Quartet are enough to gladden the soul at the best of times; hearing it here with musicians in the heady throes of live performance was like a shot to the arm. The recorded sound on this web transmission is fabulous, capturing the sweet-toned upper violins while rounding off a certain edginess l heard in the hall itself in the opening cello solo. The Castalian Quartet captured the exploratory nature of the development of the Moderato first movement to perfection as well as the witty, quiet close of the movement. The tempo was ideal.

The almost Beethovenian stark octaves that open the second movement Adagio usher in a remarkable movement, first violinist Sini Simonen particularly expressive. When Haydn writes for her ‘voice’ against the other three here, it had all the drama of an operatic scene; when Simonen’s violin sang against violist Charlotte Benetton’s sextuplets, suddenly we entered the world of the Serenade. This slow movement seemed to contain Worlds, and when it turned on its dark side, silences spoke volumes. There are some remarkable textures in the Minuet (no mere dance movement, this), all beautifully honoured by the Castalian Quartet; they made the movement sing, as if it were a prolongation of the slow movement. The cellist (Christopher Graves) led the beautifully shaded Trio; all this before the remarkable Allegro Fuga a 4 Soggetti that serves as the finale. The complexity of Haydn’s writing results in utter delight, the reverse of the cerebral mechanics the word ‘fugue’ implies; it was as if one could hear Haydn’s sheer joy in writing this.

Thomas Adès’s second work for string quartet, The Four Quarters, was written for the Emerson Quartet and premiered by them in Carnegie Hall in 2011. Tracing the progress of a single day, it exhibits Adès’s characteristic command of both his own harmonic universe and his writing for the instruments themselves. The piece begins with ‘Nightfalls’, glistening, accented upper voices in harmonics against low, chthonic, quietly grinding cello and viola. Lush, post-Bergian harmonies hung both enigmatically and fragrantly in the air (and one can really hear when care has been lavished on the tuning of dissonances). The piece seems to stretch out for an eternity, bending our perception of time; the virtuoso pizzicatos of ‘Serenade – Morning Dew’ stand in high contrast, sudden octaves in turn arresting (and perhaps reminding us a little of those in the Haydn slow movement). The hail of pizzicato, rhythmically disjunct, seemed typical Adès in its hallucinogenic discombobulation; the Castalian Quartet’s comprehension of the power of Adès’s use of gesture was a clinching aspect to this movement’s success. An ostinato rhythm pervades ‘Days’, a dark trudge that rises to the level of a repeated Ürschrei for all four instruments. The finale, ‘The Twenty-Fifth Hour’ is written in the unusual time signature of 25/16 (25 semiquavers to a bar); to make things even trickier, the demands Adès makes in his writing of high harmonics sound remarkable. All credit to the Castalian Quartet for such a brilliantly involved performance that seemed immersed in Adès’s utterly unique world.

Last but certainly not least, another remarkable work: Janáček’s ‘Kreutzer Sonata’ Quartet (inspired by the Tolstoy story of that name, itself inspired by the Beethoven; Janáček owned an old 1900 Russian edition of the story). The anguished harmonies of the opening were all the more powerful via the relative restraint the Castalian Quartet brought to them, allowing the rapid solo interjections to have all the more impact. The shadow of darkness that hangs over Tolstoy’s adulterous tale (which includes a stabbing) seemed to infuse this performance throughout. Janáček’s bastardisation of the dance, attempts to launch musically into carefree zones continually thwarted, coupled with ghostly lines, all underscored the atmosphere of foreboding. Interestingly, whereas in the concert hall itself I felt this could have been more edgy, on the recording it seems both beautiful and powerful.

Janáček writes for four absolutely equal parts, and the score needs a quartet of the Castalian’s calibre to really work. And work it did, the raw juxtapositions of the second and third movements increasingly manic, even trippy, any softenings overshadowed by ghostly fragments; peace is an elusive reward here, even less so in the finale, with its obsessive, rapid repetitions and enigmatic close. A fabulous performance of great emotive force and profundity.

Expert camera work enhanced the enjoyment of this video; a beautiful, powerful concert performed at the highest level.

For more about the Castalian String Quartet click here.