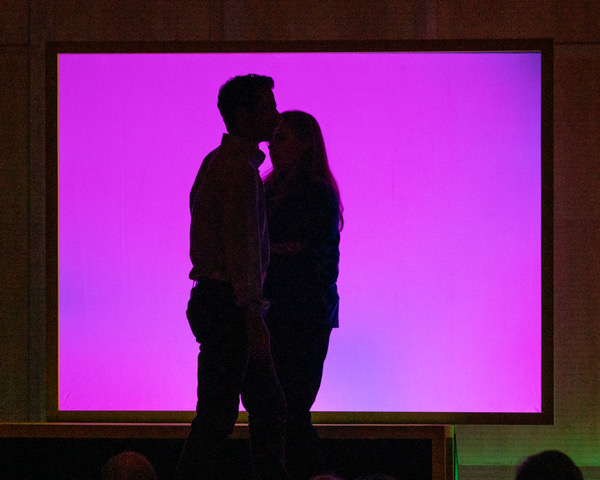 The essence of love is explored in Marc Neikrug’s A Song for Mahler, which had its world premiere at Chamber Music Northwest’s 2021 Summer Festival. A man and woman are partners in life and music: she is a professional singer with an adoring public, while he is her coach/accompanist. Furthermore, he loves her passionately. She teases him that he only wants her for her body, and after 22 years of marriage and a son, he doesn’t deny it. We, the audience, are called upon to witness the obliteration of lives lived to the fullest as she succumbs to early-onset Alzheimer’s disease.

This is the third of Neikrug’s pieces exploring the nexus of theater and music. The composer has self-professed issues with traditional opera – namely, that it takes too long to sing the words, and the setting of what he terms ‘purely mundane, everyday words into singing’. The result in A Song for Mahler is a play with both spoken dialogue and singing, the latter of which Neikrug employs when something more than speech is required to convey the emotions experienced by the characters.

Neikrug uses Mahler’s ‘Liebst du um Schönheit’ – in which love, not the allure of beauty, youth or riches, is the font of true love – as a vehicle for the story. The song, which singer and pianist have performed hundreds of times, resonates deeply with the couple. It is only heard once in its entirety, at the very beginning when she sings it as an encore after a recital. Snippets of its beguiling melodies, however, are woven into the score to great effect.

As the singer, the wonderful mezzo-soprano Jennifer Johnson Cano was bold, passionate and self-absorbed. She loves her husband, but it is, of course, her talent that fuels both their careers. Cano sings Mahler’s sumptuous melodies in ‘Liebst du um Schönheit’ beautifully, with the same tease in her voice as when she flirts with her husband. She is also seen coaching an unseen singer on the musical and textural nuances of the song. Her haughtiness is revealed when she asks her husband if the singer whom she was coaching grasped anything from the session.

The diva never disappears as the disease ravages her memory, but her true being is revealed. She rejects her husband’s suggestion that they travel, preferring to spend what time she has left with her family. Later, after the disease has progressed, her husband attempts to stoke her memory, first by vocalizing and then by getting her to sing the Mahler song. He succeeds in that she remembers the music and her husband’s name, but not the man who is sitting beside her and angrily orders him to leave when he touches her. On future visits, he has become the nice man who is her friend.

Kelly Markgraf is boyish and earnest as the husband who reacts to his wife’s ever-increasing forgetfulness with anger, frustration and fear. That he notices the subtlest of changes in her behavior is a product of both his love for her and the attention to detail that his profession demands. The arc of the story is experienced through his eyes, as he is the one who remembers their love and life together. Markgraf, who is as sensitive an actor as he is a singer, captured the husband’s mercurial emotions best while singing, which is, of course, his natural métier.

Douglas Fitch’s ingenious set is nothing more than a few pieces of lumber, painted a shocking apple green, that provide the framework for concert hall, home and the facility where the singer is placed for her own safety. Quick shifts in lighting and a large screen on which images of home, nature and abstract designs appear create place instantly, and mood as well. Splashes of color from the singer’s flowing caftan and bouquets of flowers add flare. For a matchstick production, it is extremely effective.

This is Neikrug’s first stab at a theater work incorporating both music and singing, and his discomfort with the genre is apparent. His setting of the text is at times more workmanlike than inspired. The penultimate scene, where Cano begins to sing ‘Liebst du um Schönheit’ in straight tone to the instruments playing a fractured, minor-key version of the accompaniment, found the composer on his surest footing. The work should have ended there. What followed was proof that Neikrug hadn’t cracked the nut of setting mundane texts to music, but rather succumbed to it.

The work’s real musical interest is in the instrumental interludes that course through the work. Neikrug captures the evolution of the couple’s relationship and the myriad of emotions that course through the story quite remarkably with his angular, complex style. Clarinetist David Shifrin, who served as the festival’s artistic director from 1981 until last year, and the FLUX Quartet provided a level of emotion on par with the singers. Shifrin’s playing, in particular, had a singing, human-like quality that made words superfluous.