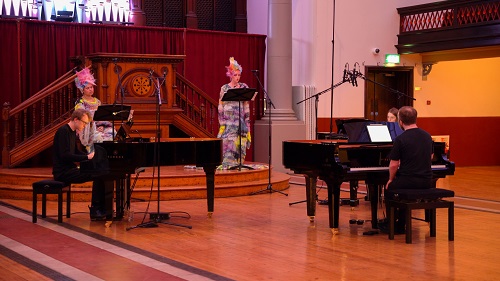 My final visit to this year’s Tête-à-Tête Opera Festival was also the final night of the festival. Alastair White’s RUNE was unquestionably my highlight, a worthy successor to WEAR, which I saw in 2018. (There have been others in between too.) Looking down from the balcony of Hackney’s Round Chapel, we saw and heard a reflection and dramatisation, both enigmatic and increasingly direct, of the journey of a young girl who, in a world in which history was forbidden, dared discover and tell her story and thereby to uncover the rune of the universe’s origin. Of course, no one, least of all our holidaying Foreign Secretary, could have predicted this would coincide with the terrible victory of the Taliban in Afghanistan; but that in itself heightened the importance not only of the message, if message there were — that, quite rightly, was left for us to ponder — but also of the very deeds of artistic creation and performance, runes of our own origins, existence, and, we hope, flourishing.

A beguiling soundworld of two female voices, soprano Patricia Auchterlonie and mezzo Simone Ibbett-Brown, and three pianos (the MA, VA, and VAL’NAK’SHA) rendered both strange and familiar what we knew. Drama lay as much in their interaction, glittering, lyrical, highly logical, yet capricious, and so much else, as in the words and scenic directions of White’s compelling libretto. A Prologue set the scene in terms of musical processes — and pitches, four of them eventually ceding their place to a fifth, and so on, as diminution of note values had our thoughts and responses gather pace. Mesmerising movement from Waters personified, their dress seemingly as integral to the whole as musical and verbal processes, helped create and order a visual framework, yet also bent our aural perception and understanding. The ‘transdimensional canals’ through which Kes’Cha’Au’s journey took her — and us — suggested a melding of physical and metaphysical, of quantum mechanics and spatial manifestation, and so much else: something, or some things, we consider to be art, history, culture, everything we consider both to impart value to our lives and yet also to defy notions of mere value. Symbols, ciphers, directions, whether verbal, visual, or in the half-lights and half-lives of piano and vocal reverberations, ‘traces of our passage’, propelled us on our way, perhaps to understand but certainly to wonder.

My immediate desire, upon reaching the end — or should that be the beginning? — was to wish to start again, to listen and re-listen, to watch and re-watch, in the light of tentative progress I had made. It was as if those numerical relationships that formed the walls of the universe itself had become sound, movement, and much else, as if the sounds that did likewise had become words, numbers, movement, and so on. Asking what came first was less beside the point than a question that never arose. Such, I think, was testament to the quality both of work and performance.