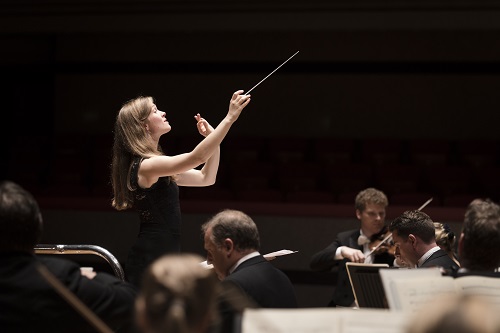 The City of Birmingham Symphony Orchestra (CBSO) returns to its full strength and range of activities this autumn, sharing the talents and ambition of the entire CBSO family of ensembles with audiences in its home city and beyond. From large-scale symphonies at Symphony Hall, a B:Music venue, and unplugged gigs in Hockley Social Club to workshops in schools, the orchestra will offer communities throughout Birmingham and the West Midlands the crucial opportunity to re-engage with live music and culture this autumn.

The season opens on Thursday 16 September with Principal Guest Conductor Kazuki Yamada leading the CBSO Chorus and CBSO Youth Chorus – reunited with the orchestra for the first time since early 2020 – in a French-inspired programme including Tchaikovsky’s 1812 Overture and Poulenc’s Gloria. They will be joined by organist Anna Lapwood for Saint-Saëns’ ‘Organ Symphony’ in the French composer’s centenary year (16 & 18 September).

Stephen Maddock, Chief Executive of the CBSO: ‘After the stop/start nature of the CBSO’s concerts – and indeed all our lives –  in 2020-21, it’s fantastic to be looking ahead to a full autumn season rich in variety and musical excitement.  From symphonic blockbusters by Saint–Saëns, Beethoven, Dvořák, Tchaikovsky and Brahms, to new works by some of today’s most exciting composers, by way of Elton John and the Classic FM Hall of Fame, I really do hope that once again audiences will let the CBSO uplift them and be reminded of the power of live music.’

Three CBSO Centenary Commissions – part of the orchestra’s most ambitious commissioning programme to date – receive their premieres: Mark-Anthony Turnage’s Go For It (30 September, world premiere), Debbie Wiseman’s Carnival of the Endangered Animals (24 October, world premiere) and Jonathan Dove’s In Exile (9 December, UK premiere). Putting the spotlight on species at risk of extinction, Wiseman’s work places a modern and topical spin on Saint-Saëns’ iconic The Carnival of the Animals suite in a family-friendly performance whilst Dove’s piece for baritone, cello and orchestra to a text by Alasdair Middleton is performed by Sir Simon Keenlyside and Raphael Wallfisch, and paired with Dvořák’s New World Symphony. They will also give UK premieres of two pieces by living Canadian composers new to the CBSO’s repertoire: Cassandra Miller’s La Donna (6 October) and Samy Moussa’s Nocturne (27 October).

With the 90-strong orchestra back on stage at the world-renowned Symphony Hall, audiences will be invited to experience the full aural splendour of well-known symphonic blockbusters Saint-Saëns’ Organ Symphony, Tchaikovsky’s Pathétique, Brahms’ Symphony No.1, Beethoven’s Pastoral Symphony and Dvořák’s New World Symphony alongside other CBSO favourites including Tchaikovsky’s 1812 Overture, Copland’s Appalachian Spring Suite, Ravel’s Daphnis and Chloé and Prokofiev’s Romeo and Juliet.

A memorial concert – A Covid Requiem – in memory of the lives lost throughout the Covid-19 pandemic will see the orchestra join forces with the CBSO Chorus, CBSO Youth Chorus & Children’s Chorus and bass James Platt to perform Fauré’s Requiem (6 November).

The hugely popular Friday Night Classics also returns with the CBSO’s musicians showcasing their versatility in performing orchestral music from a variety of genres. 50 years after Your Song stormed up the UK charts, the CBSO will team up with West End vocalists to present a symphonic tribute to Elton John (22 October) and Michael Seal joins presenter John Suchet and violinist Jennifer Pike for the Classic FM Hall of Fame (3 December). CBSO’s annual Christmas celebration returns, featuring the massed family of CBSO choruses and packed with festive favourites, carols and readings for the whole family directed by Chorus Director, Simon Halsey (16, 17 & 19 December). Inspired by Vienna’s traditional New Year celebrations, the Orchestra will enter 2022 in style with a glittering selection of Viennese waltzes, polkas, marches and arias performed under the baton of Eduardo Strausser and guest Soprano Aga Mikolaj (7 January).

The CBSO continues its commitment to showcase and nurture the talents of young musicians. The CBSO Youth Orchestra – one of Europe’s leading Youth Orchestras – performs Shostakovich’s Symphony No.10, Dani Howard’s Argentum and Britten’s Diversions for piano left hand with left-hand specialist Nicholas McCarthy at Symphony Hall on 31 October, whilst the CBSO expands its family of choirs with the founding of the CBSO Junior Children’s Chorus for young singers aged 6-10 years old. The CBSO Children’s and Youth Choruses also evolve creating additional opportunities for music theory and vocal coaching to offer a more rounded educational experience for its members.

The CBSO remains committed to supporting and developing the musical education of children and young people throughout the West Midlands. After returning to schools in Spring 2021 and reaching over 5,500 children in the Summer Term, the orchestra will resume its full programme of educational activities, working closely with schools to deliver their programmes safely. It continues its four-year-long Share The Dream project with local primary schools to create a new work which will be performed by children next summer to herald the start of the 2022 Commonwealth Games in Birmingham. The orchestra’s autumn Family Concert will take children of all ages on a trip to the (musical) zoo with the world premiere of film and TV composer Debbie Wiseman’s CBSO Centenary Commission Carnival of the Endangered Animals paired with Saint-Saëns’ iconic Carnival of the Animals (24 October) and for under-5s, Notelets concerts return, providing a toddler-friendly interactive introduction to classical music that combines music with story-telling in the intimate surroundings of CBSO Centre.

This autumn the CBSO will invite its second cohort of Youth Ambassadors to curate, programme and promote a concert in Spring 2022.  The orchestra will hand complete control to 10 dynamic Youth Ambassadors, aged between 16 and 21 from a diverse range of backgrounds, to run all aspects of the concert. Aimed at young people who want to share their curiosity and love of live orchestral music, the one-year volunteer programme was founded to mark the CBSO’s centenary in 2020.

Connecting communities and inspiring people from all backgrounds through music has been at the heart of the CBSO’s mission since it was founded 101 years ago. It continues to develop its visibility and engagement within its home city and in October launches a month-long series of community events. In collaboration with neighbourhoods throughout Birmingham it will co-create tailored programmes of workshops, performances and events. As part of the month-long focus, the orchestra will also launch a brand new series at Hockley Social Club. Located in a converted warehouse on Hampton Street, Birmingham, the newly-opened food and drinks market will be the unique setting for intimate and informal chamber performances of contemporary classical music. The orchestra will also give pop up performances for members of the public at Birmingham’s New Street Station.

Collaborating for the first time with Audiovisibility which works with deaf children, deaf artists and deaf communities to design and deliver collaborative and inclusive learning environments, musicians from the orchestra will work with professional deaf flautist and music leader Ruth Montgomery to challenge perceptions around hearing impairment and musical enjoyment and experience. A residency at a school for the hearing impaired in Birmingham will culminate in a performance from Dame Evelyn Glennie streamed to schools across the UK in September.

CBSO+ free pre-concert events will also return – this year in the newly-renovated front of house areas of Symphony Hall – making concerts a whole-evening experience. Events include free pre-concert talks and Q&As with conductors and soloists, and pre-concert performances by talented musicians from Royal Birmingham Conservatoire.

The CBSO is proud to continue its partnership with Classic FM, the UK’s most popular classical music station, as its Orchestra in the Midlands. Classic FM recommends a series of concerts throughout the season including the season opener conducted by Kazuki Yamada and the world premiere of Debbie Wiseman’s CBSO Centenary Commission Carnival of the Endangered Animals, and present a concert in partnership with the orchestra – Classic FM Hall of Fame presented by John Suchet as part of Friday Night Classics. The CBSO’s long-standing association with BBC Radio 3 also continues with selected concerts broadcast on Radio 3 in Concert. The CBSO’s Prom tomorrow (5 August) featuring CBSO Centenary Commission, The Exterminating Angel Symphony by Thomas Adès, and the music of Ruth Gipps who started her career as an oboist with what was then the City of Birmingham Orchestra, will be broadcast live on BBC Radio 3 and BBC Four TV.

The CBSO is delighted to continue its ongoing partnership with Marquee TV, building on the Orchestra’s work throughout the pandemic to connect digitally with music-lovers worldwide and enabling global audiences to experience the CBSO.

The CBSO is committed to ensuring the widest possible audiences can enjoy the Orchestra’s music, with tickets starting at £15 for full price single tickets and the implementation of a more generous discounting scheme for those booking upwards of two Season concerts at a time, meaning that the more concerts booked, the more you save. Tickets cost £5 for students and those aged under 17 and £10 for those aged 18-30, and free tickets will be available for NHS workers.  The Orchestra’s Mystery Seats scheme also continues this season, offering over 3,000 tickets in non-allocated seating priced just £13 each.

The CBSO’s priority remains the wellbeing of its audiences, artists and staff. The Orchestra will be offering a mixture of standard and socially-distanced seating for sale in Symphony Hall during its autumn 2021 Season. For further details on the Covid-19 policy for audience members attending performances at Symphony Hall click here.