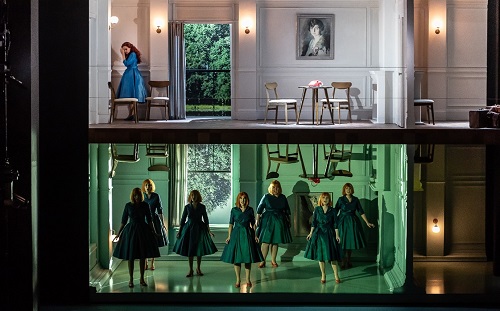 Wexford Festival Opera are celebrating their 70th anniversary this year. The Festival had to postpone the three operas they were planning to stage in 2020 under the generic theme, ‘Shakespeare in the Heart’, due to Covid. They have now brought these three operas back and opened the Festival with Edmea by Alfredo Catalani.

Catalani’s music is familiar to us today because of his final opera La Wally which has been staged infrequently in modern times. He was unusual among Italian composers in being drawn to the operas of Richard Wagner and the German Romantic tradition with its myths and tales of heroism. While there are elements of traditional Italian opera there is also a refinement and elegance about his music. Edmea was Catalani’s fourth opera and received its first production on 4 November 1886 under the baton of the 19-year-old Arturo Toscanini. I was not familiar with this opera before this performance and, while I did enjoy it immensely, the music is not particularly memorable. The work is dramatically convincing although some of the characters were a little underdrawn.

The eponymous Edmea is an orphan who is in love with Oberto who reciprocates her feelings. However, in order to marry Oberto she needs to obtain the consent of her guardian, the Count of Leitmeritz, who is also the father of Oberto. The Count finds the relationship between Edmea and his son unacceptable and instead forces her to marry his servant, Ulmo. Edmea is deeply unhappy with this situation and tries to drown herself in the River Elbe. She is rescued by Ulmo but loses her mind and the two are taken in by a troupe of travelling jesters. Edmea accompanies the troupe to the castle of the Barone of Waldek where she once again meets Oberto. Oberto takes her back to the Count’s castle and the couple vow to run away together. However, Ulmo realises that Edmea can never love him and he kills himself to release her from her wedding vow. In return he asks Edmea to kiss his forehead when he is dead which she agrees to do.

Julia Burbach sees a parallel between Edmea and Hamlet’s Ophelia who succeeds in drowning herself in the river. She decides to connect Edmea’s attempt to drown herself to the underwater world of her unconscious in this psychological interpretation of the opera. Cécile Trémolières’s split-level set shows us the brightly lit real world on the top level and a darker mirror image of this underneath. The ladies chorus are mirror images of Edmea’s unconscious mind and they populate her mental world underneath (Nico Muhly’s Marnie uses a similar technique with ‘shadow Marnies’). In the initial opening scene, the ladies chorus is lined up in front of the window and the singers move from side to side in a desynchronised way. The ripple effect they create is unsettling and suggests Edmea is psychologically fragile. The upstairs window and balcony create an opening into the unconscious and when Edmea jumps from the balcony into the river she re-emerges in the dimly lit unconscious world underneath.

The characters in Edmea’s unconscious world all wear unusual costumes suggesting an Alice in Wonderland-type transformation. Edmea herself is initially seen wearing a conservative blue dress but when she re-emerges after her suicide attempt, she wears a bright yellow dress with glaring orange shoes. Fritz and his troupe of players all wear Dickensian outfits, while some of the ladies who they meet in the subsequent scene are wearing eighteenth-century wigs and elaborate gowns. At the end of the opera when Ulmo commits suicide, this acts as a shock to trigger Edmea back into the world of reality and we see her again in the brightly lit upper level of the set. Burbach’s interpretation fits very well with the plot of this opera and I found it engaging and interesting.

Anne Sophie Duprels did not seem entirely comfortable in the role of Edmea and some of her singing in the first act was uneven and sounded studied and tentative as if she was not completely confident about the score. She improved as the opera progressed and I liked her performance of Edmea’s aria in the final act. Luciano Ganci brought the ardent Oberto convincingly to life and I enjoyed the rich Italianate tone which he brought to the music. Leon Kim also did an excellent job as the love-struck Ulmo and his singing was beautifully calibrated and richly coloured. Ivan Shcherbatykh’s Count was dramatically convincing although much of his singing sounded thin and lacking vocal heft. Conor Prendiville was first rate in the role of Fritz and he brought an exuberance to the role together with some high stepping dance moves.

Conductor Francesco Cilluffo did a first-rate job keeping cast, chorus and orchestra on track. I particularly enjoyed the orchestra’s performance of the Prelude to Act III with its turbulent strings, and there were some unusual sonorities involving brass and percussion. Cilluffo accompanied the singers beautifully, remaining flexible and creating a perfect balance of sound. The Chorus also had a very good night acquitting themselves well in some of the set piece numbers.

Overall, there was much to enjoy here and this was a great start to this year’s Wexford Opera Festival. It is good to see the O’Reilly Theatre open to audiences once again.