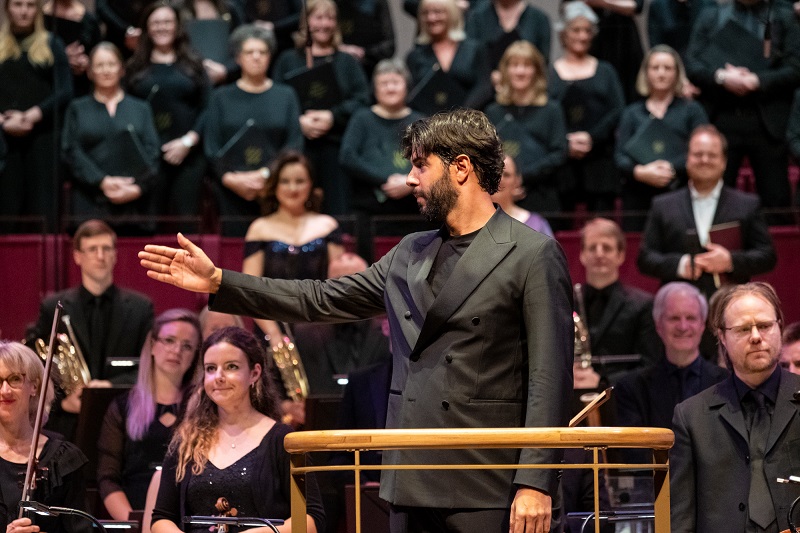 Domingo Hindoyan enjoys a close relationship with composer Roberto Sierra, and Sierra’s Sixth Symphony was written for this event, the opening concert of Hindoyan’s first season as Chief Conductor with the Royal Liverpool Philharmonic Orchestra, which concluded with Beethoven’s Ninth. So, Sierra therefore quipped his Sixth Symphony had to be his ‘Pastoral’, being his Sixth. Each movement reflects memories of Sierra from Puerto Rico, from the magical nights of the tropics to tropical hurricanes.

There is clearly a close relationship developing here: Hindoyan and the RLPO premiered Sierra’s Trumpet Concerto, ‘Salseando’, in 2020 and on the strength of that immediately commissioned the Sixth Symphony (a co-commission with the Polish National Radio Symphony Orchestra and the Boston Symphony Orchestra). Sierra uses pretty much the same instrumentation as Beethoven’s Ninth for his piece, sneaking in only one instrument, a bass clarinet.

The symphony is cast in four movements, and it was remarkable to hear the sheer accuracy the Liverpool orchestra brought to the fast-paced ‘Memoria urbana’. There is a sense of the frenetic here, set against moments of deep reflection. At times, a more lyric impulse seems to ‘cut across’ the busy textures. Underlying those red-raw faster sections seems to be the spirit of the dance (something Sierra explored in depth in his Sinfonia No.3, ‘La Salsa’, as well as the orchestral piece Borkén, both of which can be heard on an excellent Naxos disc with the Puerto Rico Symphony under Maximiano Valdèz). Sierra seems to like using the traditional symphonic four-movement form and is certainly able to sculpt a satisfying whole here.

The restrained sounds of ‘De Noche’ (At Night) seem to be somewhere between Villa-Lobos and Bartók’s night music, while ’Huracán’ is a virtuoso mini-concerto for orchestra with the RLPO on blazing form here. The sense of rhythmic exuberance was white-hot, while the brass glissandos were delivered as the gestures they were surely intended to be. No doubting the Caribbean rhythms of the ‘Final’ either (hints of Bernstein here, too, perhaps). That sense of lyricism intercutting with the mobile rhythms is once more found in the finale.

A special mention for the brass in this performance: incredibly accurate throughout and fully up to all of Sierra’s many demands.

Incidentally, the record company Albany has been a particular advocate for Sierra: those wishing to investigate his chamber music could do worse than the disc that includes Cello Sonatas Nos. 1 and 2 plus, amongst other works a ‘Salsa on the C-string’ for cello (soloist John Haines-Eitzen) and prepared piano (Albany 1700).

Beethoven’s Ninth Symphony was given a tremendously musical performance. While Hindoyan’s tempo for the first movement seemed perfect, I wish I could say the same for the camerawork on the RLPO visual stream: positively discombobulating in the opening bars, and needlessly so (ditto the deliberate use of out-of-focus shots). The concert is also available on BBC Sounds, without such distractions. Camera work apart, as the movement unfolded it became clear that Hindoyan’s awareness of Beethoven’s counterpoint and linear workings is of laser-like precision achieved through an ability to create chamber-like textures while not sacrificing any of Beethoven’s internal fire.

Hindoyan seemed intent on reminding us of the spirit of the dance behind the Scherzo (perhaps a turbo-powered dance, more the energy of the finale of Beethoven’s Seventh Symphony transferred across!). Again, there was a baseline accuracy that under Hindoyan’s direction was elevated to the greatest heights. There were superb oboe solos from Jonathan Small.

The beautiful interaction between bassoons and clarinets that launched the slow movement was exquisitely managed; as were the ensuing string passages, shot through with that inner light of linear clarity one starts to realise might be a Hindoyan trademark. Full points for actually having the fourth horn, Timothy Nicholson, play the fourth horn solo (a strange thing to say, perhaps, but it is more often than not played by the principal in my experience).

The RLPO seems to be comprised of phenomenal soloists who come together for the highest good: bassoonist Nina Ashton’s contributions to the finale offered a case in point. As for the vocal soloists, they were perfectly chosen, Tariq Nazmi’s opening declamations strong and focused. Soprano Anita Hartig has a beautiful yet strong voice, while mezzo Jennifer Johnston balanced that with a gloriously full tone. Tenor Andrew Staples’s ‘Froh, wie seine Sonnen fliegen’ was a true highlight of the performance: strong again, but with none of the discomfort this solo can carry with it. The chorus, too, was exemplary; Beethoven’s demands are justly infamous, and the Royal Liverpool Philharmonic Choir took them all in its stride, including those notoriously high soprano entries.

A wonderful performance. Hindoyan understood the structure of the finale completely, leading to a terrific sense of elation (and a justly deserved ovation from the audience).

Hindoyan seems to go from strength to strength: his excerpts from I puritani at this year’s Gstaad Festival left indelible memories; this concert certainly seems to continue in that tradition.