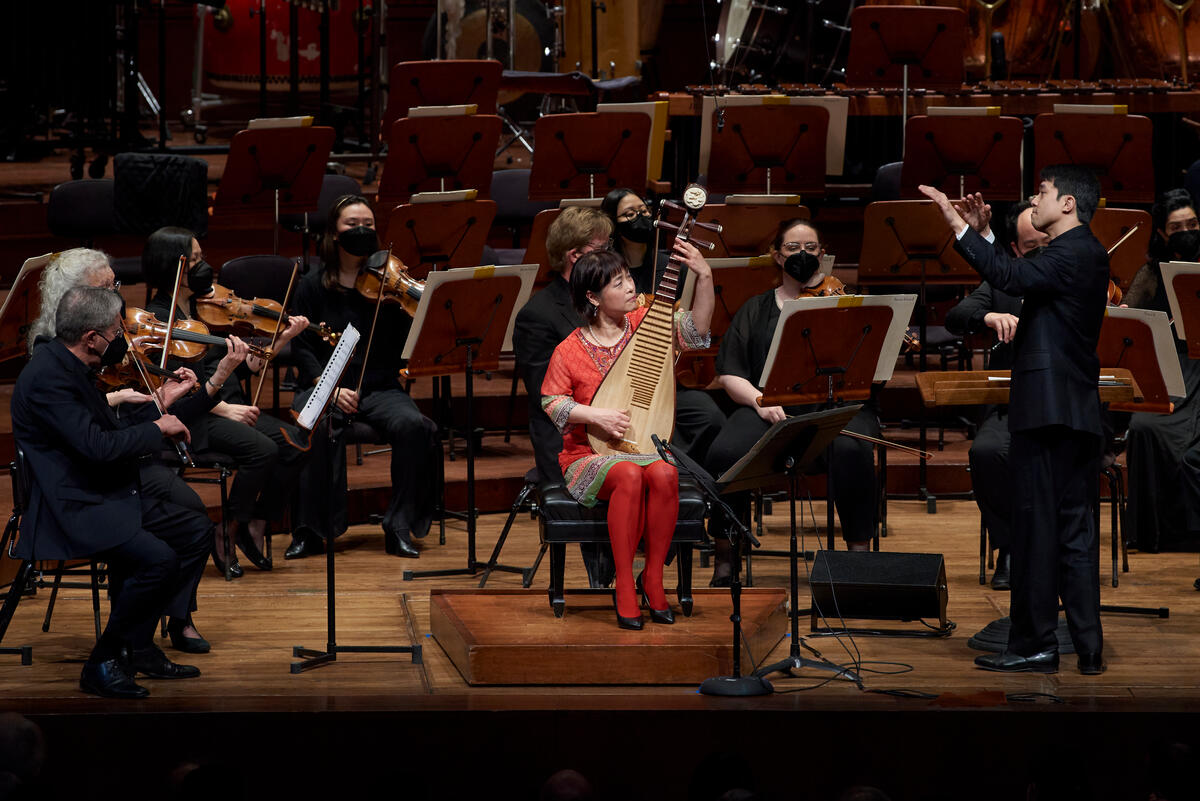 If you have ever wondered what it is like to be a bird, all you have to do is listen to Takashi Yoshimatsu’s The Age of Birds. A symphony in all but name, the 18-minute piece puts us into an avian world just as thoroughly as Debussy’s La Mer or Britten’s Sea Interludes plunge us into the sea.

Yoshimatsu’s music, written in 1986, highlighted a San Francisco Symphony program of Asia-inspired pieces, all new to local audiences. It made an engaging lineup in this week’s subscription concerts for Lunar New Year. Enthusiastically and evocatively conducted by Perry So, who was making his SF Symphony debut, Birds took flight from the opening measures. Familiar tropes – fluttering flutes, swooping strings, soaring brass – created sonic richness by layering these feathery effects into an extended dawn chorus.

That description might call to mind the music of Olivier Messiaen, the twentieth-century French composer famous for transcribing bird song to use as melodic building blocks. Yoshimatsu, whose other works often evoke birds, leavens Messiaen’s hard edges with the sort of plush harmonies that jazz borrowed from Ravel and Debussy. The composer began his music career playing jazz and rock in Japan, and his music reflects these roots more than anything definably Japanese.

That was apparently an intentional aspect of the program, which So introduced Friday by noting that he had to winnow dozens of candidates down to the five works presented. A seven-minute soundscape was inspired by the sounds of basketball games being played in a gym. A percussion-heavy paean traded in Chinese and Japanese drumming. A dense, angry, dissonant piece was inspired by a dissident Korean poet. And Lou Harrison’s gentle concerto for pipa, the Chinese lute, made a long-overdue local debut.

Birds, Yoshimatsu’s first orchestral commission, was the most effective entry of all. The first movement begins with flutes overlapping sweet bird calls against slow-moving chords in the strings. The second goes into a softer mode, yet it still has chattering figures bursting throughout the orchestra. Swirling figures in the finale build to a series of exciting climaxes by layering avian-inspired musical gestures one atop the other, before it dwindles winningly at the quiet finish.

The other standout was Lou Harrison’s Concerto for Pipa with String Orchestra, which featured Wu Man, the incomparable pipa virtuoso. Michael Tilson Thomas championed the music of Harrison during his 25-year tenure as music director. But the last major work Harrison composed before his death (in 2003) never got a local hearing after its 1997 debut in New York by the Stuttgart Symphony.

The legendary Bay Area composer became fascinated with Asian culture and happily employs Western musical instruments to evoke an Eastern atmosphere while using the pipa as if it were a guitar or mandolin. In the opening Allegro, the pipa plays arpeggios and broken chords with a Chinese flavor against a loping, syncopated accompaniment in the strings, and the finale (‘Estampie’) sets the pipa’s lively Chinese-sounding tune against a rhythm borrowed from the fourteenth-century French dance form. Cello and bass players tap their instruments with their hands and bow beneath the bridge to provide the percussive accompaniment.

The concerto’s middle section, a series of short pieces, begins with the pipa evoking a balalaika in a Russian dance and includes a Neapolitan tune played with beautiful tremolo to sustain the melody. The most charming of them, ‘Wind and Plumb’, creates a dreamy respite of Chinese delicacy in the very center of the work.

Texu Kim’s Bounce!!, the most recent piece (2014), made a fine opener. Kim mimics the sound of basketballs being dribbled with thumps in the low winds and strings, as high strings, piccolo and flutes provide the squeaks of sneakers on the floor. It’s fun and, at seven minutes, it doesn’t overstay its welcome.

The same cannot be said for Young Pagh-Paan’s NIM, which launched the second half of the concert (all of it played by an orchestra several times the size of the one in the first half). In her 1987 score, the composer expresses the poet Kim Chi-Ha’s ‘love poem to the earth’ with 17 minutes of grating, bass-heavy dissonance. Perry So introduced the piece as ‘shamanistic’. Although it never seemed to get anywhere, it portrayed a very scary medicine man.

Born in Beijing, Zhou Long won the 2011 Pulitzer Prize for his opera, Madame White Snake, and has centered his career on combining music of East and West. The Rhyme of Taigu (from 2003), employs a team of percussionists on big drums, including the taigu (the Chinese version of the Japanese taiko), alongside Western bass drums and timpani, plus a whole kitchen full of bells, gongs, tam tams, cymbals and conga drums. Percussion drives the 15-minute work so much that at times it recalls the unbridled energy of Silvestre Revueltas’s La noche de los Mayas, only with a Pacific-Asian accent instead of Mexican.

After the drums establish a steady rhythm for a disarmingly delicate start, a clarinet interrupts, the rhythms shift and things become increasingly complex and syncopated. As the brass joined the party in the final section, the vigor and high spirits were irresistible.